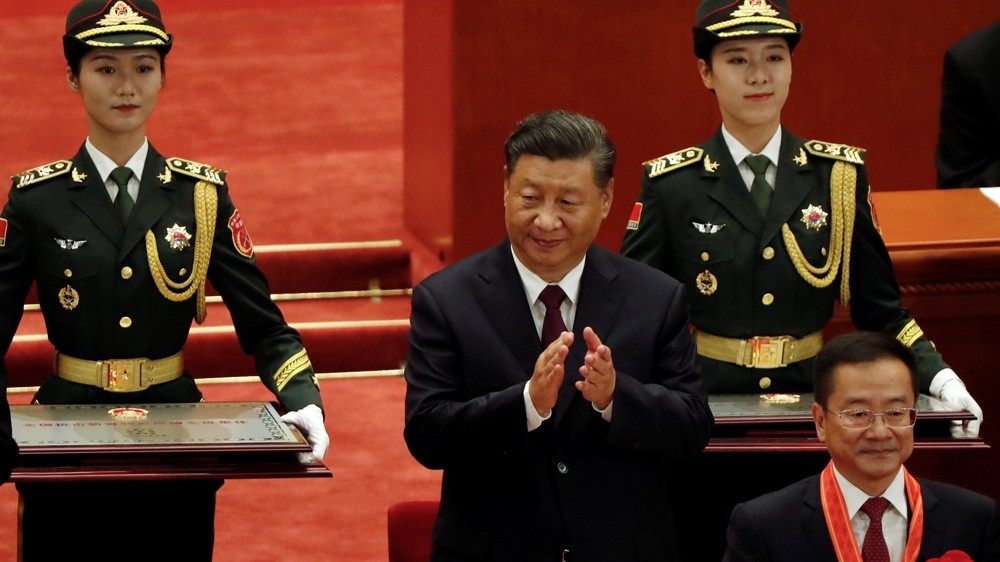 China’s president Xi Jinping has told a ceremony in Beijing that the country had acted in an “open and transparent” manner over the coronavirus.


Trainee doctors and interns have returned to work in South Korea after a weeks-long strike over government reform plans.


There have been more than 27.3 million cases of coronavirus confirmed around the world, according to Johns Hopkins University, and 892,443 people have died. At least 18.3 million people have recovered.

India has reported the most deaths from coronavirus in a month.

More from the ceremony in Beijing where President Xi Jinping has been speaking.

He told the audience that China acted in an “open and transparent” manner over the virus, which first emerged in the central city of Wuhan late last year.

The country has also made “concrete efforts” to help other nations affected by the disease, he said.

03:50 GMT – Victoria to strengthen contact tracing as it doubles down on virus

Victoria is strengthening its contract tracing programme to ensure is maintains a steady decline in cases.

State Premier Daniel Andrews says the state government will set up five contact tracing teams to focus on different geographic areas of the southeastern state of Australia, making it easier to target specific areas when patients are diagnosed.

Andrews says the lower daily case figures show the state’s on the right track with its tough lockdowns.

“I think we’ll be able to take some significant steps soon because the trend is with us, the trend is good,” he said in a televised news conference, referring to more rural areas of the state.

China is holding a special event to recognise its ‘role models’ in the fight against the coronavirus with Zhong Nanshan, China’s top respiratory disease expert, awarded the Medal of the Republic – China’s top honour.

Zhong was among a group of specialists who first went to Wuhan in January to investigate the mysterious new virus that had emerged at the end of December.

“We must not lower our guard and must finish the battle,” Zhong said in his acceptance speech.

China came down hard on doctors in the city who tried to raise the alarm over the disease, and there was outrage after the death of Li Wenliang, an eye doctor who was reprimanded by the authorities for raising his concerns about the new illness with colleagues. Li was ‘exonerated’ in August.

Never has a building been more aptly named: Outstanding individuals, set to be honored for the parts they played in the nation’s COVID-19 fight, travel to the Great Hall of the People in Beijing https://t.co/jPKTJsFodI #ThankyouCOVID19Heroes pic.twitter.com/2itUE75GlV

South Korea has reported 136 new cases of coronavirus, the sixth day in a row that the number has been below 200, according to Yonhap.

The country’s been trying to control a spike in cases that begun in August 14 and has been linked to a church service and a political rally in central Seoul.

The Korea Centers for Disease Control and Prevention says stricter distancing measures are beginning to have an impact although the emergence of case clusters remains a concern.

Medical experts are linking a surge in coronavirus cases on the Indonesian island of Bali to the inaccurate, low-cost rapid antibody test kits that are being used to screen domestic visitors.

Foreign tourists can’t travel to the popular island, but Indonesians have been able to do so since July 31.

Since then, the island’s tourist authority says it has been welcoming an average of 3,000 domestic tourists every day.

But along with the tourists’ return it has also seen a spike in coronavirus cases, and health experts say the use of cheap, but unreliable, antigen tests could be creating a false sense of security.

Balinese people, who are Hindu, wear protective suits during a cremation ceremony called ‘Ngaben’ in Klungkung last month. The island has seen a growing number of cases since domestic tourism resumed in August [Made Nagi/EPA]

01:40 GMT – Japan to tap emergency reserve for $6.3b for coronavirus vaccines

Japan has approved the use $6.3 billion from its emergency budget to secure coronavirus vaccines.

The government says it hopes to have enough vaccine for every citizen by the middle of next year, providing any innoculation for free.

It seems Japan’s economy shrank even more than initially thought in the second quarter to the end of June.

The government initially said the economy contracted by 7.8 percent compared with the first quarter.

Now it’s taken a closer look at the figures and says it shrank 7.9 percent.

It’s the country’s worst economic contraction in its modern history.

Victoria state has reported 55 new cases of coronavirus and a further eight deaths.

The southeastern state now accounts for about three-quarters of Australia’s 26,377 cases. Melbourne, its capital city, is under a strict lockdown and curfew until September 28.

#COVID19VicData for 8 September, 2020. Yesterday there were 55 new cases reported and 8 lives lost. Our thoughts are with all those affected. More information will be available later today. pic.twitter.com/GEo5Iio7vU

00:00 GMT – South Korea doctors say they will return to work

Doctors’ associations in South Korea say their members are returning to work after a weeks-long strike over government plans to reform the medical system.

A separate committee representing physicians and clinicians who also took part in the strike says its members will also report for duty.

The Korean Medical Association, the country’s largest doctor’s group, reached an agreement with the government to end its strike on Friday, as coronavirus cases surged.

Hello and welcome to Al Jazeera’s continuing coverage of the coronavirus pandemic. I’m Kate Mayberry in Kuala Lumpur and will be keeping you updated over the next few hours.

Read all the updates from yesterday (September 7) here.

Don't Miss it 'This is not holiday break time': Qld closes its borders as COVID-19 cases increase | ABC News
Up Next Tennis Number One Ash Barty pulls out of French Open over coronavirus