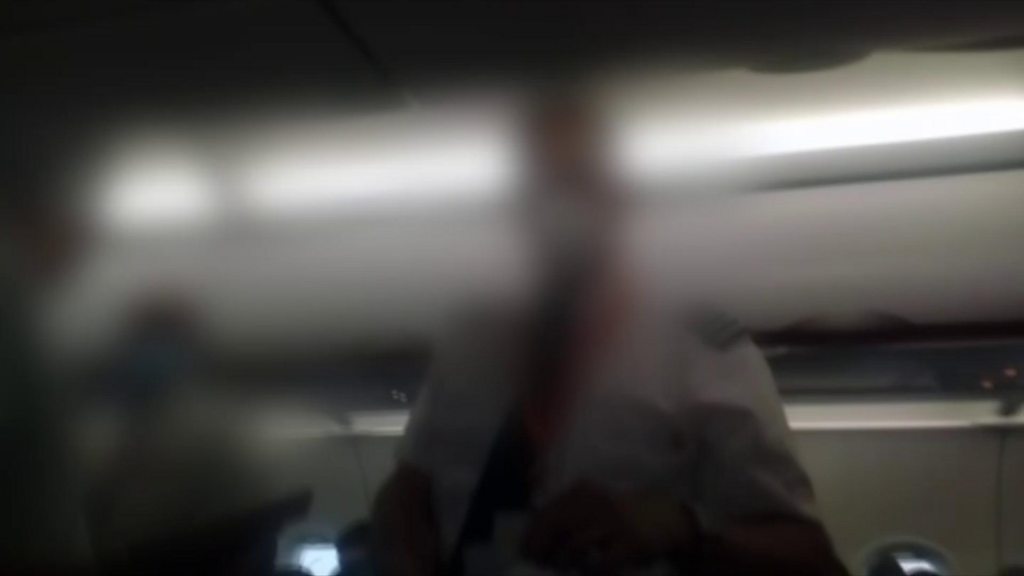 A man with serious breathing issues says he was “ambushed” into wearing a face covering on a plane.

EasyJet has apologised after one of its pilots was filmed threatening to remove the passenger from the flight.

The man was carrying an exemption card – but it was rejected by the crew on his journey from Jersey to Gatwick.

Face coverings on UK public transport are mandatory but some people are allowed not to wear them, due to age, health or disability reasons.

Wearing a face covering is “strongly recommended” on the Island of Jersey, but certain groups are allowed not to wear them, including those with breathing difficulties.

The BBC has also been told of cases where people with lung conditions have been turned away from shops and other types of public transport because they were unable to wear a mask.

Charities say exemptions must be respected by companies and understood by the public.

With masks now a part of daily life, the challenge for many is striking a balance between safety procedures and protecting vulnerable people.

Nick says he can’t wear anything around his face or neck because he has chronic asthma.

“Whether it’s a polo neck or a scarf round your face, the sensation is stifling. I just find it increasingly difficult to breathe,” he says. “It’s like a steel belt round my chest.”

The Department for Transport for England says those who are exempt can choose to carry a card, badge or a homemade sign.

However, providing documentation is a personal choice and not necessary in law.

Nick showed his exemption card to the pilot

Nick had printed off an official exemption card from the government’s website before flying to the island of Jersey to see his family in August.

The card was accepted on the flight out, but on the return journey the crew said it was not valid and he would have to wear a mask.

Nick refused. He says: “The staff came to speak to me around six times. The 30-minute delay was seen as my fault and each visit whipped up more hostility among the passengers.

“I was insulted, shouted at, laughed at. It felt like everybody was against me.”

Nick says he became so desperate he started filming on his phone.

Footage shows the pilot refusing to accept his exemption card and saying if Nick didn’t put on a mask, he “was off”.

Media captionCoronavirus: How to wear a face covering

Nick eventually agreed, but says it caused him to hyperventilate during the hour-long flight.

“I would do anything to avoid wearing anything that restricts my breathing. That’s more terrifying than being insulted by 100 passengers, but eventually I felt like I had no choice.”

Shaken by the “storm of abuse” he says he received from other passengers, Nick requested partial anonymity when speaking to the BBC.

EasyJet says all customers are required to wear a face covering but acknowledges some passengers may not be able to.

A statement from the airline said: “We have recently updated our policies in line with recent UK government guidance so that as well as a medical certificate, customers can alternatively provide a relevant document from a government website or lanyard.

“We are sorry that this new policy was not recognised by the crew on this occasion.”

The airline described Nick’s behaviour as “disruptive”, but a passenger, who did not want to be named, said he behaved “calmly” in a “stressful situation”.

“No-one seemed to care about his condition. The staff should have taken him away from the other passengers to have the conversation in private,” he tells the BBC.

Asthma UK and the British Lung Foundation called Nick’s story a distressing case, but says there are others like him.

“The government is really clear there are exemptions from wearing a mask,” explains Head of Policy, Sarah MacFadyen.

“The vast majority of people with lung conditions are fine wearing a mask, but for a small number it is impossible for them to breathe. That’s why these exemptions are in place, so they can still go out and live their lives.”