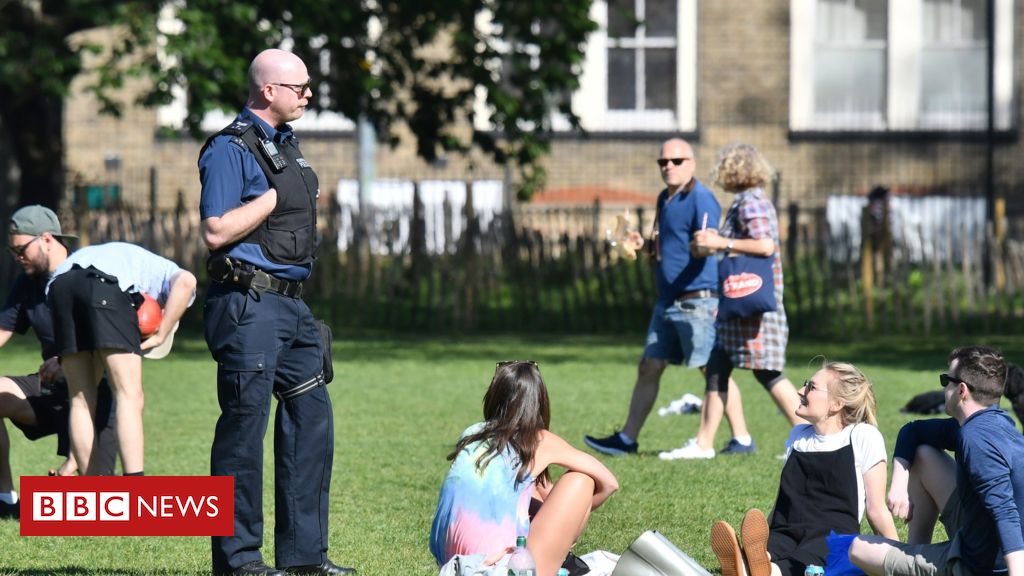 Social gatherings of more than six people will be illegal in England from Monday – with some exemptions – amid a steep rise in coronavirus cases.

But it will not apply to schools, workplaces or Covid-secure weddings, funerals and organised team sports.

It will be enforced through a £100 fine if people fail to comply with police, doubling up to a maximum of £3,200.

Several exemptions apply to the new rules – which come into force on 14 September – with households and support bubbles bigger than six people unaffected.

A full list of exemptions will be published by the government later.

In a preview of his address, the PM said: “We need to act now to stop the virus spreading. So we are simplifying and strengthening the rules on social contact – making them easier to understand and for the police to enforce.

“It is absolutely critical that people now abide by these rules and remember the basics – washing your hands, covering your face, keeping space from others, and getting a test if you have symptoms.”

No 10 said any group of seven or more people gathering anywhere “risks being dispersed by police or fined for non-compliance”.

At-a-glance: What are the new rules?
Social gatherings of more than six people in England will not be allowed in law from Monday 14 September

The new rule applies to private homes, indoors and outdoors, and places such as bars and cafes
The rule does not apply to schools and workplaces, or weddings, funerals and organised team sports
A full list of exemptions is due to be published before the law changes

People who ignore police could be fined £100 – doubling with each offence to a maximum of £3,200

The change applies to people in England of all ages, and to gatherings indoors and outdoors, in private homes, public outdoor spaces, and venues such as pubs and restaurants.

BBC political correspondent Nick Eardley pointed out that pubs and restaurants would be allowed to have more than six customers inside, but that the groups of six would have to be socially distant from each other.

The rationale behind allowing this, but not allowing larger groups of people inside other people’s homes, is that businesses can only be open if they follow safety and hygiene measures set out by the government, he added.

The devolved administrations in Scotland, Wales and Northern Ireland are able to set their own coronavirus restrictions and, while largely implementing similar rules, have moved at their own pace during the pandemic.

Previously, guidance in England allowed gatherings of up to six people from different households outdoors – or two households or any size, indoors or outdoors.

Media captionWhat is the R number and what does it mean?

Ministers and government advisers earlier expressed concern over a “sharp rise” in cases and a “heartfelt” apology was issued following shortages in England’s testing system.

Overall, there have been 8,396 new cases reported since Sunday – with 2,460 reported on Tuesday alone.

There were also 32 deaths reported, but these will not have been related to the most recent rise in cases.

The rise in cases seen in recent days has caused alarm among ministers and their health advisers.

They believe the UK is at a critical point ahead of the onset of autumn and winter when respiratory viruses tend to thrive.

Clearly people living with an infected person are most at risk.

But, after that, the most common contact infected individuals have is with visitors to their household, according to data gathered by England’s NHS Test and Trace service.

It is ahead of leisure venues, shops, workplaces and health and care settings.

Clearly large gatherings in homes – especially indoors, which is more likely to happen when the weather turns – present the greatest risk.

Ministers will also make it clear on Wednesday further restrictions will follow if the rise in infections is not curbed.

The UK government’s chief medical adviser, Prof Chris Whitty, who No 10 said backed urgent action in England, has said Covid-19 rates are now rising, especially among people between the ages of 17 and 29.

He warned that if people stopped social distancing then “Covid comes back”.

England’s deputy chief medical officer Prof Jonathan Van Tam added: “People have relaxed too much. Now is the time for us to re-engage, and to realise that this is a continuing threat to us.”

In Bolton, Greater Manchester, a local rise in cases led Health Secretary Matt Hancock to announce the immediate return of some lockdown measures on Tuesday.

Among the restrictions imposed on the town was a requirement for hospitality venues to only offer takeaway service and close to customers completely between 22:00 BST and 05:00.

It also became illegal for people in Bolton to socialise with those outside their own household in any setting, even outdoors.

Schools in Bolton will continue to teach pupils as usual, Bolton Council said, as its leader described how Covid-19 was “moving round the borough uncontrolled”.

Meanwhile, a new public information campaign will be launched across the UK reminding people of the “basics” – washing their hands, covering their face and giving others space.

THE NAKED SCIENTISTS: Where did COVID-19 come from?

THE SECRET LIFE OF TEACHERS: What’s it like returning to classrooms amid a global pandemic?

How will you be affected by the new restrictions? Do you have questions relating to the changes? Get in touch by emailing haveyoursay@bbc.co.uk.

Don't Miss it US coronavirus: More students go back to school as Covid-19 cases rise among children and at colleges
Up Next Coronavirus: hopes for most shops in England to reopen in June – BBC News