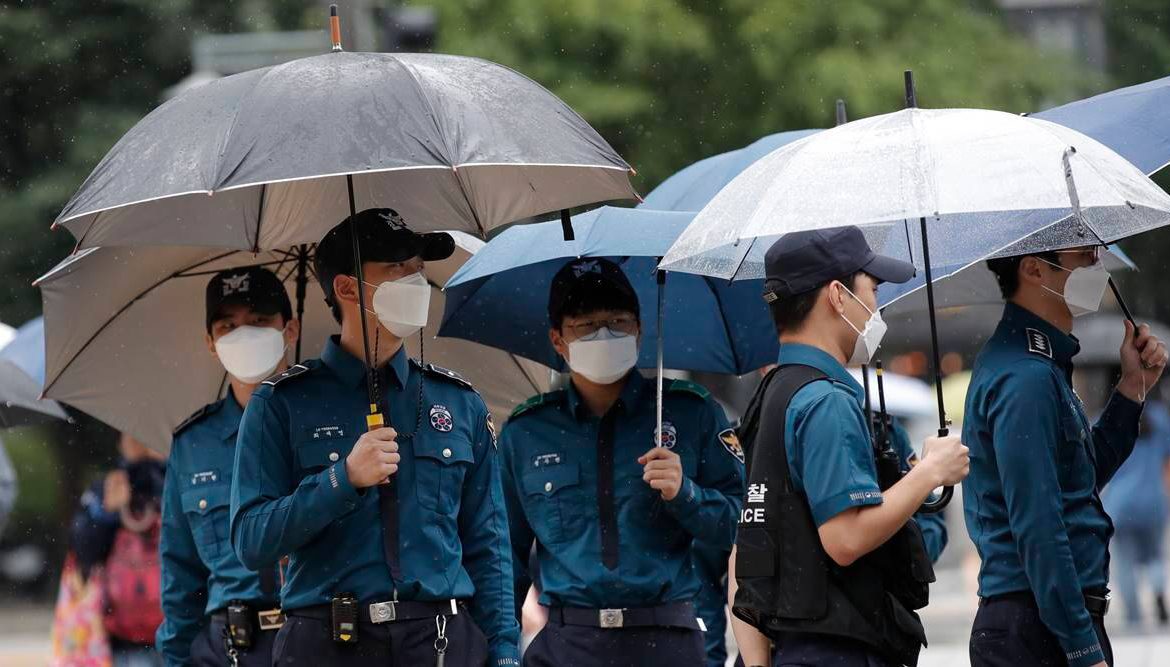 Coronavirus Global Updates: In the United States — the worst-affected country by coronavirus — states hit hard by a summer surge in cases showed improving trends, with Texas, Arizona, Florida, and California reporting the fewest daily infections in months. In the race to find the vaccine, leading developers pledged to avoid shortcuts on science as they face pressure to rush a shot to market.

The figures bring the total number of recorded infections to 75,981 and 393 confirmed deaths. This come as students return to schools for inperson instruction and tourists trickle back to the skyscraper-studded city of Dubai.

The UAE has pushed an aggressive testing campaign with 85,917 virus tests conducted in the past day.

Over 1,000 test COVID positive in a single day in Czech Republic

The Czech Republic has been facing a steep rise of new coronavirus cases with the number of people tested positive in one day surpassing 1,000 for the first time.

The day-to-day increase in the country reached a record of 1,164 on Tuesday, the Health Ministry said. The previous record was less than 800 on Friday.

The spike has come a week after the start of the new school year with dozens of schools partially or completely closed due to pandemic.

In the past months, EU officials have stressed the need to maintain good ties to China, a growing economic, political and military power. (AP Photo/File)

In the past months, EU officials have stressed the need to maintain good ties to China, a growing economic, political and military power, as relations with the EU’s old ally, the United States, have been strained during the Trump presidency.

A major overnight fire swept through Greece’s largest refugee camp, which had been placed under COVID-19 lockdown, burning through container housing and leaving more than 12,000 migrants Wednesday in emergency need of shelter on the island of Lesbos.

In dramatic night-time scenes, migrants at the overcrowded Moria refugee camp fled fires that broke out at multiple points and were fanned by gale-force winds, gutting much of the camp and surrounding hillside olive groves. Protests also broke out involving migrants, riot police, and firefighters. There were no reports of injuries.

Aid agencies have long warned of dire living conditions at Moria, where more than 12,500 have been living in and around a facility built to house just over 2,750.

German security officials say thousands of extremists took part in a demonstration against the country’s coronavirus restrictions last month that culminated in attempts by some protesters to storm parliament.

The head of Berlin state’s intelligence service, Michael Fischer, told lawmakers Wednesday that a preliminary review of images from the August 29 protest indicated that “at least 2,500 to 3,000 right-wing extremists and Reich Citizens took part in the protests.” The Reich Citizens movement disputes the legitimacy of the post-World War II German constitution; the movement overlaps with far-right groups.

Fischer said those counted so far were identified as right-wing extremists based on the clothing, flags, symbols and slogans they were carrying.

“But beyond that there were doubtless also people participating in the events who couldn’t be identified as right-wing extremists or Reich Citizens based on their outer appearance,” said Fischer. He added that some of those protesters likely moved in the same circles as extremists deemed hostile to the German constitution.

Meanwhile, AstraZeneca Plc stopped giving shots of its experimental coronavirus vaccine after a person participating in one of the company’s studies got sick, a potential adverse reaction that could delay or derail efforts to speed an immunization against Covid-19 for the world. The pause stemmed from a standard review of the company’s vaccine trials after one person developed an unexplained illness, AstraZeneca said in a statement. The move was intended to give researchers time to examine safety data while maintaining the integrity of the trials, the company said.

The vaccine, which AstraZeneca is developing with researchers from the University of Oxford, has been viewed as one of the leading candidates to reach the market.

In other news, coronavirus lingering on chilled salmon may be infectious for more than a week, according to researchers in China, where imported fish have been investigated as a potential source of infections. New York Governor Andrew Cuomo said colleges that have more than 100 Covid-19 cases may have to switch to remote learning, citing outbreaks at Cornell, Hoftstra and other universities. Arizona, Florida and California reported the fewest new cases in months. Globally, there are over 27 million cases, with nearly 9 lakh deaths.

South Korea’s ambassador to France said his country managed to enforce a quick response to the coronavirus based on its previous experiences of major epidemics at a French parliament hearing on Wednesday.

Speaking before a Senates commission of inquiry into how authorities handled the COVID-19 crisis, Choi Jongmoon detailed South Koreas effective actions to fight the spread of the virus including quickly ratcheting up testing.

From the start of the crisis and even before the first case was confirmed, the government and local biotechnological companies started working together on developing test kits, Choi said. “A month later, we were able to test up to 40thousand people per day.”

South Koreas authorities were able to deploy hundreds of centers to test people with symptoms and to quickly develop smartphone apps tracking the virus, he added

A key negotiator trying to cobble a coalition government together has tested positive for COVID-19, dampening hopes that one of Belgium’s longest political impasses could be broken soon, AP reported conegotiator Conner Rousseau as saying.

Dutch-speaking Liberal Egbert Lachaert has the coronavirus forcing key politicians from six other centerleft and centerright parties to resort to video conferencing as they try to hammer out a government program.

Belgium currently has a minority government led by Prime Minister Sophie Wilmes but attempts to form a majority coalition have been unsuccessful since the May 2019 elections. There had been hopes that Lachaert could bring together a coalition of socialists liberals greens and Christian Democrats by September 17 but the positive test will make that difficult.

Myanmar’s general election campaign kicked off on Tuesday ahead of a vote scheduled for Nov. 8 as concerns grow over a rise in Covid-19 infections in one of Southeast Asia’s poorest countries. After months of recording fewer than 10 cases a day, Myanmar’s infections have more than tripled since Aug. 25 to 1,610 as of Tuesday, according to the Ministry of Health and Sports. The country reported 191 new cases on Tuesday, its highest single-day spike in virus infections.

All social gatherings of more than six people will be banned in England, under new limits to be announced by Prime Minister Boris Johnson on Wednesday, as coronavirus cases grow.

At a press conference, the premier will confirm that police will have new powers to disperse and fine any group larger than six people meeting indoors or outdoors from Sept. 14. There will be exceptions for people grouping for work, weddings and funerals, and for organized sports, but parties in pubs and restaurants, and gatherings in public spaces will all be hit by the new limits.

An almost empty Thames Clipper boat sails past the South Bank during the coronavirus pandemic on the River Thames, in central London. (Yui Mok/PA via AP)
Pope uses mask, sanitiser as he appeals for public health

Pope Francis wore a face mask and used hand sanitiser Wednesday as he appealed for the faithful to look out for the health of others as well as themselves during the coronavirus pandemic. Francis took off the mask as his car pulled into the San Damaso courtyard inside the Apostolic Palace, where last week he resumed his weekly public audiences after a nearly six-month COVID-19 shutdown.

While chairs were spaced out in the courtyard, the limited crowd massed along the barriers as Francis passed by and some lowered their masks to call out to him. The 83-year-old pope, who lost part of one lung to illness when he was young, loves plunging into crowds but tried to keep his distance and urged the crowd to stick to their seats to avoid contagion.

France reported more than 6,000 new coronavirus infections on Tuesday as the pace of laboratory-confirmed cases picked up again after a post-weekend lull. The situation in France is “worrisome,” and hospitalizations and intensive-care admissions will increase in coming days as a result of the pandemic, Health Minister Olivier Veran said on France Inter radio on Tuesday. Infections are also rising in Germany and the U.K. following a summer of lax containment.

Men wearing a protective face mask as a precaution against the coronavirus, chat in front of the Eiffel Tower, in Paris (AP)

Situation under virus not favourable for election: Japan’s Suga

Japanese Chief Cabinet Secretary Yoshihide Suga, the front-runner to take over as prime minister next week, said he didn’t think an election should be called in the current coronavirus situation. Speculation over a snap election picked up when support rates for Prime Minister Shinzo Abe’s cabinet leaped after he said he would resign, and Suga emerged as the favorite to succeed him.

Malaysia banned the citizens of more countries from entering the country as the number of its cases rose by the most since June. The ban, effective Monday, applies to citizens of countries that have more than 150,000 cases, including the U.S., the U.K. and Russia. That’s an expansion of an earlier restriction against India, Indonesia and the Philippines. All foreign tourists have been banned from entry since March.

Drugmakers racing to produce Covid-19 vaccines pledged to avoid shortcuts on science as they face pressure to rush a shot to market. In an unusual public letter, the companies agreed to submit the vaccines for clearance only when they’re shown to be safe and effective in large clinical studies. The chief executive officers of nine frontrunners in the push for a coronavirus inoculation signed the pledge: AstraZeneca Plc, BioNTech SE, GlaxoSmithKline Plc, Johnson & Johnson, Merck & Co., Moderna Inc., Novavax Inc., Pfizer Inc. and Sanofi.

A visitor wearing a face mask takes a photo of a model of a coronavirus and boxes for COVID-19 vaccines at a display by Chinese pharmaceutical firm Sinopharm at the China International Fair for Trade in Services (CIFTIS) in Beijing, Saturday, Sept. 5, 2020. (AP Photo/Mark Schiefelbein)

Don't Miss it Why an approved coronavirus vaccine may not end the pandemic quickly
Up Next Coronavirus: govt scientific advice “inconclusive” on safe reopening of primary schools – BBC News