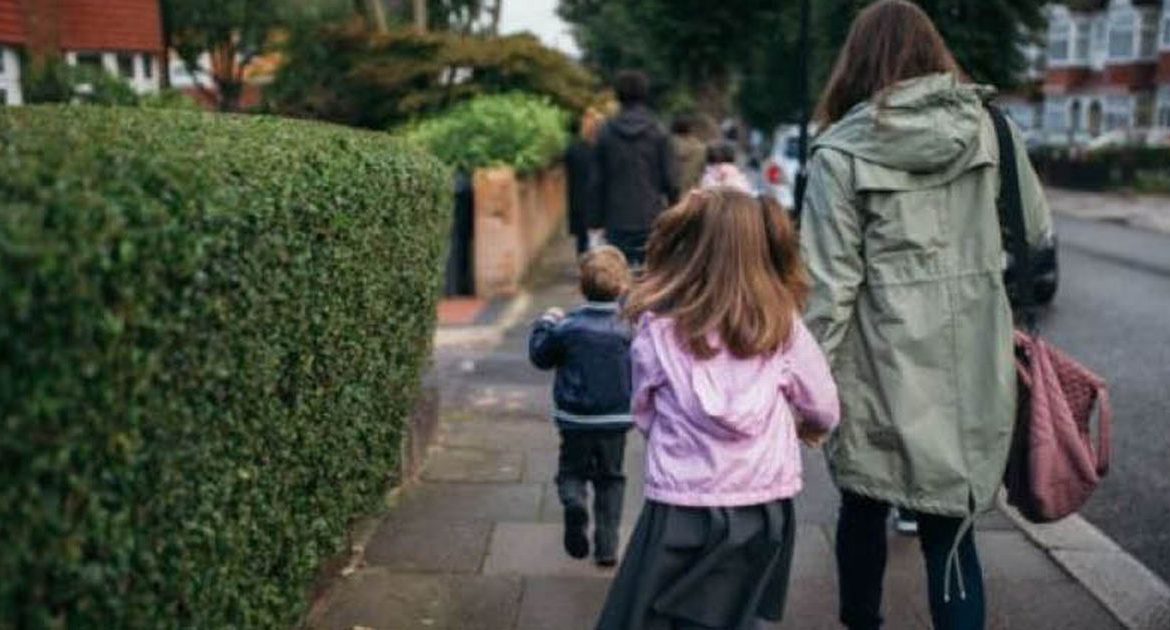 Parents say rules over self-isolation and protective ‘bubbles’ have left them frustrated and confused amid Covid outbreaks at schools across Greater Manchester.

Barely a week after schools started back for the new academic year and thousands of pupils have already been sent home after positive cases.

And while in some schools, like Green End Primary in Burnage, a positive case has affected just one class of around 30 children, in others, hundreds have been sent home to self-isolate.

The government guidance is to keep bubbles as small as possible – ‘if that can be achieved’ – to limit the impact of a positive case on the school community.

But it admits that in secondary schools, particularly in the older years, groups are ‘likely to need to be the size of a year group to enable schools to deliver the full range of curriculum subjects and students to receive specialist teaching’.

Despite the obvious preference for smaller bubbles, schools have been facing their own challenges trying to make things work with the space and staff available.

Earlier this week we reported how six classes from the Year 3 and 4 bubble at Wilbraham Primary School in Fallowfield were sent home after a pupil and parent tested positive.

Headteacher Steve Wheeldon said that in his school, like many other primaries, it would be ‘logistically and physically impossible’ to separate the children into more bubbles.

And at some high schools, including Buile Hill Academy in Salford and St Gabriel’s RC High School in Bury, one positive test has meant entire year groups are now off.

Parents – many of whom are worried over school closures impacting on their jobs – say some of the policies ‘simply make no sense’
(Image: Getty Images)

A parent of a pupil at the latter told us: “I’m concerned about hundreds of children missing out on classroom teaching, especially because this has happened because of just one child.

“Say those children go back to school and then another pupil out of that year group has a positive test, then that would be all those children sent home again.

“I know the school’s hands are probably tied in what they can and can’t do, but I feel like it’s only going to be a matter of time before other year groups have the same happen to them, and I do worry about the impact on them mentally, as well as the interruption to their learning.”

As well as concerns over bubble sizes, parents – many of whom are worried over school closures impacting on their jobs – say some of the other policies ‘simply make no sense’.

They’ve questioned why the siblings of children sent home can still attend and say ‘it’s bizarre’ that teachers can carry on teaching, even if the kids from another of their classes is sent home.

Kirstie Bailey’s children, Jacob Carter, six, and Freya Carter, four, go to Adswood Primary School in Stockport where both Year 1 classes, both Year 2 classes and one class from Year 5/6 have been sent home.

The 32-year-old, also mum to one-year-old Albie, said: “My children are in different bubbles so my son in Year 2 has to stay home and isolate but my daughter in Reception can still attend school.

“The struggle is how to get my child to and from school when I can’t take my six-year-old with me because he has to isolate.”

Freya and Jacob ready for their first day back at school. Jacob has already been sent home
(Image: Manchester Evening News)

A parent with children at Meanwood Primary School in Rochdale, where Year 2 and 4 children are having to isolate, says she wouldn’t want to be responsible for others catching the virus from siblings.

She said: “I have three children in primary school and two in high school. I have today had to collect two of them from primary due to Covid and advised they cannot return for two weeks and must isolate even with no symptoms. They’ve not had close contact with the positive child, they’re just in the same year group.

“I explained I would need the others to be isolated, as otherwise I would be having to take the two who are isolating to collect the others. But I was told if I take the others out I will be fined as it will be unauthorised absence.

“Where is the common sense in that? If we send the other children to school when we are isolating some that may end up being positive later, surely we are then responsible for passing the virus to the next school and so on. We will never be rid and our family suffers longer.”

Mum Leah, whose children go to Wilbraham Primary, fears it’s schools like theirs, in inner city areas, that will suffer most from having such ‘stringent school bubble closure rules’.

She told the Manchester Evening News: “These rules will massively, disproportionately and negatively impact children in the city, in particular children from disadvantaged backgrounds.

“We live in Moss Side. Of course bubbles are bigger in Moss Side than other places. People’s jobs are also more exposed, it’s less likely we can do them from home.

“Our schools are simply more likely to close than a small village school, or even a larger school somewhere like Didsbury.

“We love our school. It is big and busy, it is warm and loving, it is a place of joy and learning. Three days in and one child is off. How long before our other two children are off for two weeks – one in a high school bubble of 240, the other in a nursery/reception bubble of 180?

“How long before they are all off for another two weeks? How are we meant to keep our jobs through months of uncertainty? How will our kids learn, grow, develop and thrive? The government needs a better plan.”

Although children from bubbles are being sent home after positive cases, it’s not always the case for teachers.

The parent of a child at Buile Hill Academy in Salford said she was shocked to find out that teachers from Year 7 were not asked to isolate along with the year group after a positive case at the school.

She said: “They could be sat in the staff room spreading the infection and also teaching other year groups spreading it. I have a six-year-old with chronic lung disease and hearing of all these cases in school, I want to keep my other son at home but feel like I’ll be fined for keeping my son safe.”

Bosses at Buile Hill say they have followed all the necessary guidelines from Salford’s public health team, adding that the health and safety of pupils and staff ‘continues to be our top priority’.

David Clayton, CEO of Consilium Academies, the Multi-Academy Trust with Buile Hill Academy is part of, said: “Thanks to the support and advice we put in place ahead of the children returning to school, it means the right procedure was conducted swiftly and it has not impacted the school as a whole. We’re proud of how quickly Buile Hill Academy has responded to this and followed guidelines from the local authority.

“The staff at the school are continuing to come in – this is due to the fact that the right procedures and systems were in place right from the start to maintain social distancing guidelines. Teaching staff have remained at a two-metre distance from students during lessons, breaks, lunch, and movements around the school building and ventilation around the school and in classrooms has been in line with government guidance.

“This means none of the staff are having to isolate, this decision has been made in line with guidance from the Local Health Protection Team who establishes who meets the criteria of a close contact and whether it is necessary for an individual to self-isolate for 14 days.”

The guidance schools are following has been set out by the Department for Education. Once a case is confirmed then Public Health England supports the schools and local authorities in working through the guidance and offering advice where needed, including deciding who needs to self-isolate.

Viv Bennett, Chief Nurse at Public Health England, said: ” Our research has shown that the number of outbreaks in schools tends to reflect the rate of infection in the wider community. The more cases there are in an area, the more likely it is we will see cases in schools as well.

“Reducing the spread of COVID-19 in the community will help prevent cases in schools. That means it is more important than ever that people continue to follow the government’s advice on social distancing, hand hygiene and other infection control measures.”

A Department for Education spokesperson said: “The very small number of schools that are asking some or all of their pupils to remain at home are following our clear published process following a positive case being confirmed in a school.

“If a positive case is confirmed, swift action will be taken to ask those who have been in close contact with them to self-isolate, and Public Health England’s local health protections teams are standing ready to support and advise schools in this situation. Children who are self-isolating will continue to receive remote education from home.

“We will continue to work with schools to ensure all appropriate steps are taken to keep pupils and staff safe.”

Responding to the concerns that disadvantaged children will suffer most from the closure of bubbles, the spokesperson stressed that despite there being ‘more children in our education system than ever before’ – an increase of almost 800,000 since 2010 – average secondary class sizes remain low, at 22 pupils, while the average primary class has remained stable at 27 pupils.

He said: “Getting all children back into their classrooms full-time is a national priority, because it is the best place for their education, development and wellbeing. We have seen children across the country returning to school over the past week, which is testament to the efforts of school staff who have put in place a range of protective measures to prepare to welcome back all pupils.”

Has your school had to send children home to self-isolate? Let us know in the comments or email the details to emma.gill@trinitymirror.com.