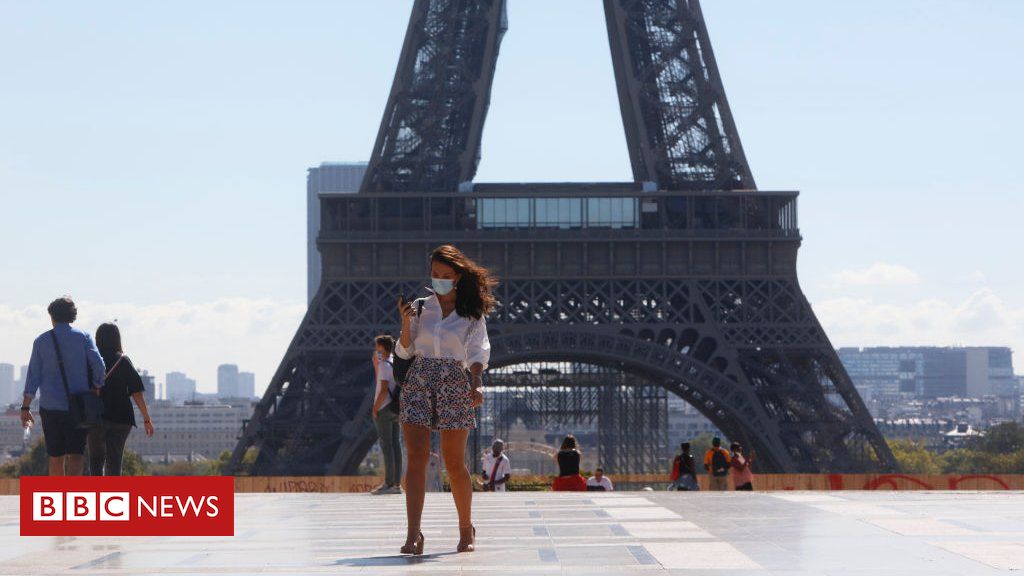 France has reported a record daily increase in coronavirus cases as the country struggles to contain a fresh surge in infections.

On Saturday health authorities said there were 10,561 new cases, rising by more than 1,000 from Friday’s figures.

The numbers of people admitted to hospital and intensive care are also increasing.

A group of doctors have urged people to avoid private gatherings amid the fresh outbreak.

“After the joy of reuniting this summer, it’s time to be careful in the private world,” the doctors said in a column published in Le Journal du Dimanche on Sunday.

“The smaller a room, the more people it contains, the less airy it is, the more you increase the risks.”

Infection rates have risen for all age groups since June, but officials say the increase is particularly significant among young adults.

France is one of several European countries to see a surge in new cases.

As authorities across the continent eased stringent lockdowns imposed in March to tackle the outbreak, new cases began to creep up in June and jumped significantly in the last month.

What’s the latest in France?

Saturday’s figures reported 2,432 people sent to hospital, 75 more than on Friday. Of these, 417 were sent to intensive care, an increase of 28.

An additional 17 people died of the virus. France has recorded more than 30,000 deaths since the pandemic began, the seventh highest total worldwide.

Officials have now designated 42 regions as “red zones”, where virus circulation is active and where stricter mask requirements and gathering restrictions are in force.

This includes Paris, Lyon, and almost the entire Mediterranean coastline.

Prime Minister Jean Castex – who recently tested negative after possible exposure to the virus – has asked local authorities in Bordeaux, Marseille and the island of Guadeloupe to suggest “a set of new additional measures” on Monday to contain the spread.

Tour de France organisers meanwhile have banned spectators from starts and finishes of stages passing through the red zones.

What’s the situation elsewhere in Europe?

On Sunday the Czech Republic recorded a daily record rise for the third day in a row, with 1,541 new infections. Neighbouring countries have begun to restrict entry for Czechs, with Germany announcing it would require a negative test for arrivals from Prague on Wednesday.

Spain also recorded its highest ever daily increase on Thursday, reporting 10,764 new infections – though the health ministry said new cases were “stabilising”. The country has the highest number of cases in Europe.

Princess Leonor, the 14-year-old heir to the Spanish throne, has gone into quarantine after one of her classmates tested positive for Covid-19. She and other pupils at Madrid’s Santa María de los Rosales school will be tested.

And in the UK, new cases rose by 3,497 on Saturday. Rules on gatherings have been tightened in much of the country – only six people will be allowed to meet indoors or outdoors in England and Scotland from Monday. media captionWatch as anti-mask protesters take to the streets of Madrid

Don't Miss it The Virus: updates on COVID-19 for 20 March | ABC News
Up Next No masks, no distancing: Schools in Denmark defy COVID-19 – with success so far