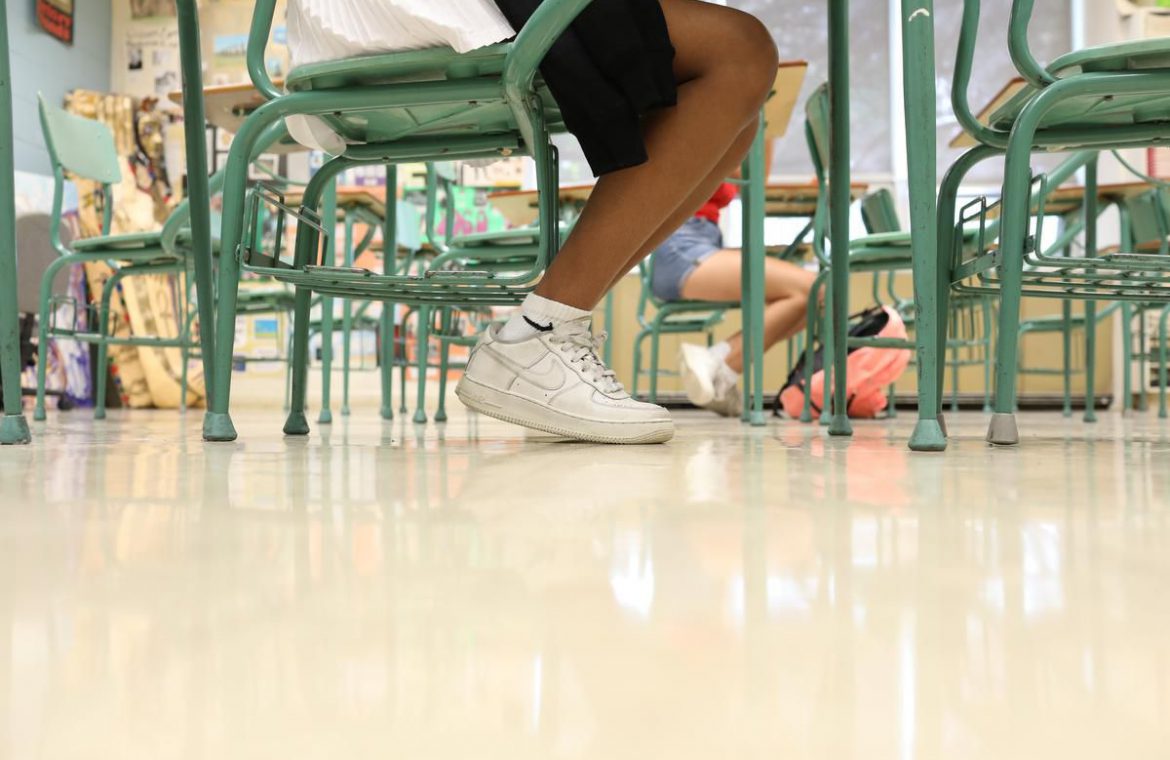 5:41 a.m.: Infectious-disease specialists warn we could face a double whammy of COVID-19 and flu

4 a.m. Some Ontario school boards are delaying the start of virtual learning

Shares in SoftBank, which announced Sunday that it was selling Britain’s Arm Holdings to computer graphics chip company Nvidia for $40 billion, jumped 9 per cent. SoftBank spent $32 billion to acquire Arm in 2016. Nvidia is best known for its graphics processing chips, while Arm is renowned as an innovator in the “Internet of Things.”

7:37 a.m. Three GTA school boards have reported at least one COVID-19 case in their communities on Sunday, according to public health.

The three schools are Louise Arbour Secondary School located in Brampton, Our Lady of Fatima CES in Woodbridge and Walpole North Elementary in Hagersville, just south of Brantford.

Each school put out a letter to parents and students notifying them of the cases and how they will be dealing with them moving forward.

6:48 a.m.: Former Italian Premier Silvio Berlusconi, who has made a career out of bouncing back from setbacks, was released Monday from the hospital after an “insidious” bout of COVID-19 that he said was the most dangerous challenge he had ever faced.

Wearing a suit and smiling after taking off his face mask, the 83-year-old Berlusconi said doctors at San Raffaele hospital in Milan told him he had the highest levels of virus they had seen in the tens of thousands of samples they had taken over the past six months.

6:20 a.m.: South Korea has reported its lowest daily virus tally in about a month as it began easing its tough social distancing rules in the greater Seoul area.

The Korea Disease Control and Prevention Agency said the 109 new cases took the country’s total to 22,285 with 363 deaths. The daily increase has stayed in the 100s for 12 straight days, but Monday’s increase was the lowest since mid-August.

The government on Sunday relaxed its physical distancing guidelines in the Seoul area, citing a downward trend in new infections and economic worries.

6:19 a.m.: India reopened its Parliament after more than five months Monday even as the country continues to report the most daily new infections of the coronavirus in the world and daily virus deaths remain above 1,000.

Lawmakers must wear masks and follow other sanitization protocols, sit on seats separated by transparent plastic sheets and keep their meetings limited.

6:18 a.m.: Pakistan’s prime minister and education officials say all arrangements are in place to ensure that every child can go to school safely.

Authorities are preparing to reopen schools from Tuesday amid a steady decline in COVID-19 deaths and infections.

Prime Minister Imran Khan took to twitter Monday saying “tomorrow we will welcome millions of children back to school. It is our priority & collective responsibility to ensure that every child can go to school safely to learn.”

6:17 a.m.: Sweden has removed Britain from its list of countries with travel warnings, allowing Swedes to travel to the United Kingdom.

At the same time, the Foreign Ministry in Stockholm said Sweden is now part of a group of countries for which the United Kingdom considers that the risks regarding the virus are lower and is no longer covered by Britain’s quarantine regulations.

Germany’s disease control centre on Monday reported 927 new cases across the country in the past day.

One county that’s seen the number of infections in a week rise above the threshold of 50 per 100,000 is Garmisch-Partenkirchen in Bavaria.

Locals there have reacted with anger to news that a 26-year-old American woman with symptoms had visited several local bars despite being told to quarantine while waiting for her test result.

As a result, all restaurants in the Alpine town must close at 10 p.m. for the next week.

5:46 a.m.: Some Ontario school boards are delaying the start of virtual learning due to a growing demand for online education in the run-up to back-to-school.

Three Toronto-area boards say they’ve seen a surge in parents opting to keep their kids out of the classroom during the COVID-19 pandemic in the eleventh hour, further complicating the already difficult task of co-ordinating classes.

The Peel District School Board, for instance, says it had to push back live online classes because 10,000 students signed up for virtual learning in the past week.

5:44 a.m.: Ontario’s legislature returns for its fall session today, but with the COVID-19 pandemic still affecting daily life, the Progressive Conservative government’s house leader says it will not be business as usual.

Paul Calandra says the legislature will continue to respect public health rules while returning to its regular four-day-a-week schedule for proceedings.

He says the government will be focused in the coming weeks on the impacts of COVID-19 on the economy, school reopenings, and the health-care system.

Calandra says Ontario’s 2020-2021 budget — which was delayed by the pandemic — will be delivered on November 15.

The government is also expected to table a formal report on the state of emergency declared by the province earlier this year in response to the pandemic.

Calandra says the government is also leaving itself leeway in the legislative schedule in case it needs to introduce additional legislation to address COVID-19 this fall.

5:41 a.m.: Infectious-disease specialists warn we could face a double whammy of COVID-19 and flu this fall and winter. Among those urging vigilance is Jeanne Marrazzo, a director of the Infectious Diseases Society of America and a physician researcher at the University of Alabama at Birmingham.

“The big concern this year, of course, is that we are going to see what could be a perfect storm,” she said. “We really can’t be complacent about this.”

The difficulty is not just that flu and COVID-19 will be circulating at the same time, said John Zurlo, chief of the division of infectious diseases at Thomas Jefferson University. It is hard to tell one disease from the other.

Both illnesses can be characterized by fever, aches, and shortness of breath. Among the few distinguishing features is the sudden loss of smell experienced by some COVID-19 patients. Flu can impair the sense of smell, too, but in that case the culprit is a stuffy nose, whereas in COVID-19 the reason is temporary damage to olfactory cells, Zurlo said.

Monday 5:39 a.m.: The morning bell Monday marked the first entrance to the classroom for the children of Codogno, Italy, since February 21, when panicked parents were sent to pick up their children after the northern Italian town gained notoriety as the first in the West to record local transmission of the coronavirus.

While the reopening of Italian schools marks an important step in a return to pre-lockdown routine, the step bears more symbolic weight in the 11 towns in Lombardy and Veneto that were the first to be sealed off as coronavirus red zones.

Codogno Mayor Francesco Passerini said the town of 17,000 has had virtually no new cases for months now, but authorities are not being complacent. He said they have spared no effort in working with school administrators to provide maximum protection to the city’s 3,500 students.

Monday 4 a.m. Some Ontario school boards are delaying the start of virtual learning due to a growing demand for online education in the run-up to back-to-school.

Three Toronto-area boards say they’ve seen a surge in parents opting to keep their kids out of the classroom during the COVID-19 pandemic in the eleventh hour, further complicating the already difficult task of co-ordinating classes.

The Peel District School Board, for instance, says it had to push back live online classes because 10,000 students signed up for virtual learning in the past week.

It says such classes will now start on Sept. 21 for elementary students and Sept. 22 for high schoolers — a week’s delay — so the board can wrangle more staff to account for the 64,000 students who are now learning from home.

The Halton District School Board advised parents Friday that online learning will begin on Wednesday rather than Monday because of “recent and increased demand” for the remote option.

That board says it working through a “significant” waitlist for virtual school and advised people who are currently attending in-person classes to continue doing so, as some virtual classes are full.

Meanwhile on Thursday, the Toronto District School Board announced that while elementary students attending classes in-person will have a staggered start to the school year on Tuesday, Wednesday and Thursday, those doing online learning — and most high school students — will begin on Thursday.

“Due to the large number of families who have selected Virtual School (more than 66,000 students), we require additional time to staff and timetable to ensure a more consistent opening for all staff and students,” the board said in a letter to parents posted on its website.

The spread of COVID-19 has increased in recent weeks, with the province reporting more than 200 new cases of the virus in each of the last three days. Toronto and Peel Region have been particularly hard hit, often reporting dozens of new cases each day.