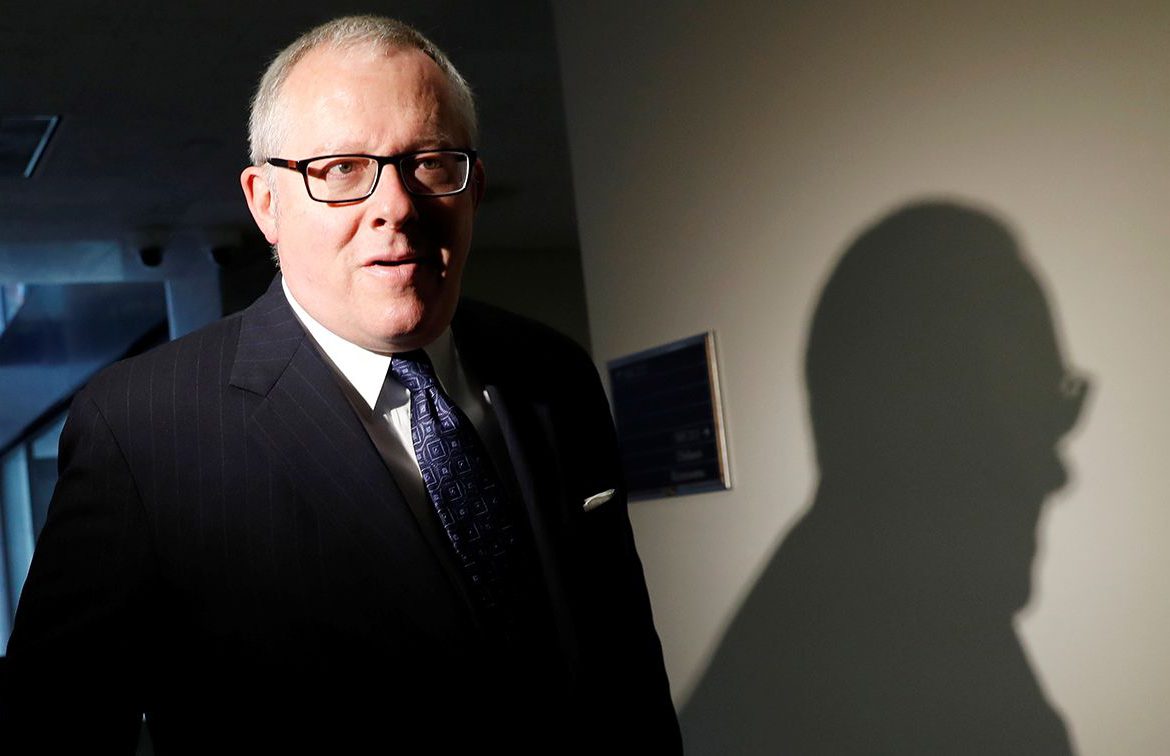 WASHINGTON — On his official podcast, the spokesman for the Department of Health and Human Services, Michael Caputo, often waxes rhapsodic about his new colleagues in the federal bureaucracy. “I’m learning from the most incredible people I’ve ever met,” Caputo said at the opening of a recent episode. “I don’t know how to express how lucky I am,” he went on. “I’m talking to experts and geniuses.”

That was a far cry from the Caputo who, from his private social media account, live-streamed over the weekend a warning to President Trump’s supporters to prepare for post-election violence. “If you carry guns, buy ammunition, ladies and gentlemen, because it’s going to be hard to get,” he said, according to remarks first reported by the New York Times.

A longtime Trump associate, Caputo was hired to manage communications at HHS in April. Alex Azar, the head of HHS, had clashed with other members of the White House coronavirus task force and was using the media to cast his own response to the pandemic in a more favorable light.

Meanwhile, the Centers for Disease Control and Prevention was chafing under White House restrictions on what its top officials could say.

Caputo was to bring HHS in line with Trump, using the combative methods he had learned over the years as a political operative. A disciple of Nixonian “dirty trickster” Roger Stone, Caputo has worked for Oliver North, Russian energy giant Gazprom and, most recently, Trump, joining his presidential campaign back when few were taking that campaign seriously.

“If I were to run for office, my skeletons would come dancing out of the closet in a can-can,” Caputo said for a 2016 profile from his hometown paper, the Buffalo News.

Caputo did not last long on Team Trump: Mockery of Corey Lewandowski, who had just been deposed as Trump’s campaign manager, led to Caputo’s own departure. Yet he remained unfailingly loyal to his former boss. That was especially the case during the investigation of Russian electoral interference conducted by special counsel Robert Mueller.

Given his own dealings in Russia (he had lived and worked there in the 1990s), Caputo himself became a minor figure in the investigation. He admitted that being questioned by Mueller’s team was “kind of frightening,” but when Mueller finally released his report, Caputo, like Trump, treated it as a complete exoneration. “All the haters can go to Hell,” he said at the time.

His unfailing support of Trump was followed by his appointment at HHS. Some reports said that the hiring had been facilitated by Daniel Scavino, the president’s former golf caddy who is now a top West Wing adviser. Scavino, however, told Yahoo news that he had nothing to do with the decision to hire Caputo to manage communications at HHS.

Michael Caputo arrives to testify before the House Intelligence Committee during a closed-door session at the U.S. Capitol on July 14, 2017. (Chip Somodevilla/Getty Images)

Caputo has no experience in health or medicine. He did not respond to multiple efforts to contact him over the telephone or email on Monday and Tuesday.

Recent days have seen Caputo’s standing erode, following a Politico report that Caputo and his advisers were pressuring the CDC to alter language in its routinely published studies, known as Morbidity and Mortality Weekly reports, to more closely reflect Trump’s own views and imperatives.

“Nothing to go out unless I read and agree with the findings how they CDC, wrote it and I tweak it to ensure it is fair and balanced and ‘complete,'” went one email to CDC Director Robert Redfield from Paul Alexander, a Canadian health researcher Caputo hired, who has a habit of questioning medical consensus.

Caputo’s standing was further undermined by a Facebook Live rant on Sunday in which he accused government scientists of “sedition” and predicted violence following November’s election. He also said that his “mental health has definitely failed.” He also said that he did not like being alone in Washington because of “shadows on the ceiling in my apartment.”

The video was recorded from the porch of his East Aurora, N,Y., home. At one point, someone seems to shout something at Caputo from a passing car. “They’re coming,” Caputo says into the camera. “Be ready. Be ready.” He then tells people to listen to the Grateful Dead.

Seemingly aware that the tide was turning against him, Caputo deleted his personal Twitter account on Monday, shortly after Yahoo News asked about the incendiary messages he had been regularly posting.

These included calls for law enforcement to use gas against demonstrators protesting against a police killing in Lancaster, Pa. Other tweets insulted critics and mocked Democratic leaders. He also accused Democratic presidential nominee Joe Biden and his running mate Kamala Harris of being “anti-vaxxers” because they have questioned the speed with which Trump promised to deliver a coronavirus vaccine.

Michael Caputo prepares for his testimony before the House Permanent Select Committee on Intelligence as part of its investigation into Russian interference in the 2016 presidential election on the kitchen table at the home of a long-time friend in McLean, Va., in 2017. (Shutterstock)

Caputo “liked” a tweet that said that “Cardi B ain’t even hot” and another that seemed to make fun of how gay people talked.

Another tweet that Caputo had deleted earlier described how, in his estimation, “millions of Chinese suck the blood out of rabid bats as an appetizer and eat the ass out of anteaters.”

Caputo’s plight is emblematic of a challenge that has hounded Trump from the very start of the administration. He promised to “drain the swamp” of Washington by bringing in outsiders from the private sector who would apply their business expertise to the federal government. But sensitive to criticism, many corporate executives kept a distance from the Trump administration. Meanwhile, many senior government officials fled a president bound to regard them as members of a “Deep State.”

According to critics, that has Trump with little recourse at a time of crisis, leading him to rely on untested backbenchers. Monday saw intensifying calls for Louis DeJoy, the postmaster general, to resign. DeJoy joined the Trump administration shortly after Caputo. Much like Caputo, he has no experience in the agency to which he has been assigned. And, also like Caputo, he has been accused of using his office to exert political pressure on how the federal government functions.

By Monday evening, Sen. Patty Murray, D-Wash., appeared to become the first member of that chamber to call for Caputo to be fired, accusing him of spreading “misinformation” and “conspiracy theories.”

In what must be a stinging rebuke, the Buffalo News echoed that claim. “We generally approve of Western New York having an influential voice in Washington,” an editorial in the newspaper said, “but Michael Caputo’s is no longer needed.”

Caputo attempted to do damage control of his own, telling Weijia Jiang of CBS News on Monday evening that he was not suffering from a mental breakdown.