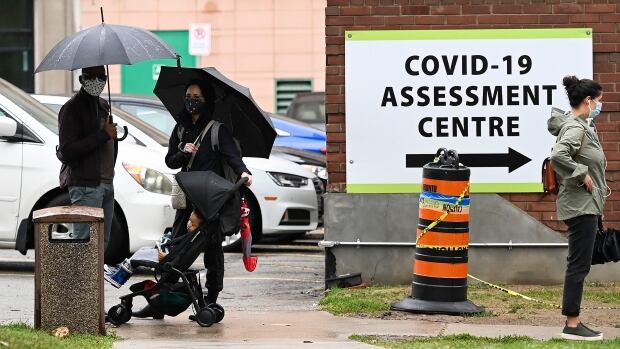 Ontario will lower the limits on social gatherings in a bid to stem a recent increase in COVID-19 cases, but isn’t yet saying when the new health guidelines will be available.

The current limit on social gatherings is 50 people indoors and 100 outdoors.

As for the specifics around the measure, Ontario Premier Doug Ford said he will be discussing the issue with his cabinet and will be talking with local mayors and medical officers before going ahead with the plan.

“There’s going to be some severe, severe fines” for those who choose not to follow the guidelines, he said, noting that details could come as soon as Thursday. “They will be the highest in the country.”

Provincial health officials have attributed the spike in cases largely to people not following public health guidelines at social gatherings.

Ford has promised to take action in the regions where most of the cases have emerged — Toronto, Peel, and Ottawa.

He has also not ruled out further lockdowns in those areas if virus case numbers aren’t brought under control.

Ontario reported another 315 new cases of COVID-19 on Wednesday — more than half of which are in people under 40.

In a series of tweets, Health Minister Christine Elliott said 64 per cent of Wednesday’s cases were in that age bracket.

Of the province’s 34 health units, 25 reported five or fewer cases, and 12 regions saw no new cases at all.

The majority of the cases are now concentrated in five different health units.

All of the figures used in this story are found in the Ministry of Health’s daily update, which includes data from up until 4 p.m. ET the previous day. The number of cases for any particular region on a given day may differ from what is reported by the local public health unit, which often avoid lag times in the provincial system.

At a news conference Wednesday, Ford announced the launch of a new interactive screening tool for students, parents, and staff to help gauge whether to attend school each day.

Ford was also asked Wednesday about a photo making the rounds on social media showing him and other elected officials at MPP Stan Cho’s wedding under a marquee tent, with some of the attendees not wearing masks.

The premier maintained everyone present had their temperature taken and was wearing masks, and that the photo in question was taken when people stood to welcome the bride and groom.

With the numbers continuing to trend upward, lines outside testing centres have grown longer in recent days.

At St. Joseph’s Health Centre in Toronto, some were waiting nearly three hours to get a test.

WATCH | Man waits 2 hours for COVID-19 test so he can accompany wife on hospital visit:

James Koziak arrived at the St. Joseph’s Health Centre at 6:45 a.m for a test and still had to wait two hours. 0:35

It took James Koziak two hours to be tested, and he was one of the lucky ones.

Koziak’s wife is in a long-term care facility. He’s been tested six times before, but arrived early at 6:45 a.m. to beat the crowd so he could produce a negative test in order to accompany her on an upcoming hospital visit.

“I came here yesterday afternoon, saw the bloody lineup and I knew I had to be here really early.

“I just cannot believe in Canada that someone would have to go through this,” he said, his voice breaking.

At his news conference Thursday, Ford insisted “we weren’t caught off guard” with the recent increase in demand for COVID-19 tests, saying the province is aiming for a new daily testing target of 50,000 per day.

The province is currently processing around 25,000 to 30,000 tests per day, the health minister said.

The premier said the province is “working out a few details with the private sector” to make testing available at various retailers including pharmacies. Ford said there will be “a couple thousand” such sites, specifically to test people without symptoms. Those with symptoms should still go to traditional testing centres.

“It’s going to be very, very soon,” Ford said. “I can’t give you exact date … but we’re ready, they’re ready and we’re just going to ramp up the testing like you’ve never seen before.”

WATCH | How Ontario will address its COVID-19 testing logjam:

With the help of the private sector, Ontario will soon have the most COVID-19 testing centres in the country with a goal of 50,000 tests per day, according to Premier Doug Ford and Health Minister Christine Elliott. 2:01 Cases rising since mid-August

Cases have been on an upswing since mid-August, with numbers topping 200 a day since Sept. 12. Wednesday’s update brings the province’s total to 45,383 cases of the virus since the outbreak first began in late January.

Ontario also recorded an additional two deaths, bringing the province’s official toll to 2,822. A more up to date death toll, according to data collected by CBC News from the province’s local health units, stands at 2,862.

Twenty of those patients are being treated in intensive care and 12 are on a ventilator. In total, the province currently has 2,316 active, confirmed cases of COVID-19.

Almost 29,000 tests for the virus were processed on Tuesday in Ontario’s network of labs.