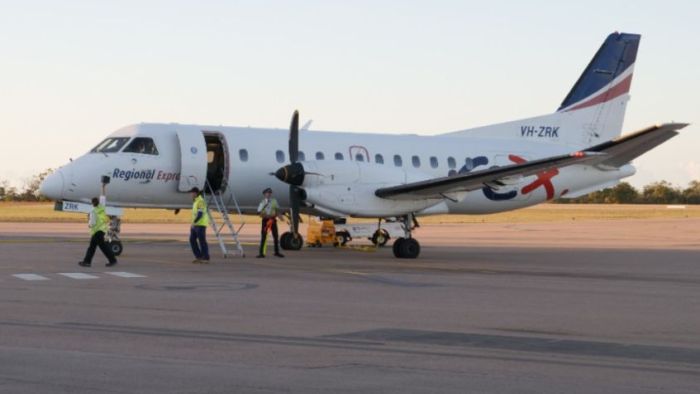 Regional towns across the country could soon have new air services in the wake of Virgin Australia cancelling routes because of the coronavirus pandemic.

While international and state borders are closed, Regional Express Airlines (Rex) is weighing up whether to fly to towns that Virgin Australia abandoned, such as Port Macquarie and Tamworth in New South Wales.

Rex is based at Mascot in Sydney, and is the nation’s largest regional network aside from QantasLink.

Catch up on the main COVID-19 news from September 16 with our coronavirus blog.

“We think we can take up the slack in routes that we compete currently against Virgin, like Albury and Mildura, and also routes that Virgin’s already abandoned some time ago in Western Australia, like Perth to Geraldton,” Mr Sharp said.

“Economics plays the ultimate judge in these things, and if a town’s big enough to warrant an air service, Rex is willing to provide it.”

He said the regional airline industry wouldn’t have survived without the Commonwealth Government’s support leaving many regional communities cut off from their capital cities.

Earlier this year, the Australian Government had provided a cash boost to regional airlines through the Commonwealth Grant Agreement through the COVID-19 Regional Airline Network Support program.

“As part of our return of the support that our company’s received from the Australian Government, we are prepared to operate services to communities where we don’t see any profit,” Mr Sharp said.

Speaking at a press conference in Wagga Wagga today, Deputy Prime Minister Michael McCormack would not say if the Government would offer support to Rex should they take over the regional routes, saying they would have those discussions in the future.

Instead, he called on the premiers to ease the border restrictions.

Mr McCormack said he felt that in many cases the border restrictions were for political purposes, but they were restricting business, aviation, and “life as we know it”.

“Let’s get on, open those borders up, allow tourism to be what it needs to be, allow Australians to travel freely around their own country and get more planes flying interstate, that is so important.

However, Mr Sharp said opening borders prematurely could cause more harm to the aviation and tourism industries.

“It’s a fine judgment by governments, but one thing they do need to bear in mind is that a premature … lifting of border closures could result in another wave, and that’s going to do us a lot more harm,” he said.

Virgin Australia has cancelled many of its regional routes as it continues its post-coronavirus restructure.(AAP: Darren England)

“I commend Rex for their forward thinking,” Cr Pinson said.

“Disappointed in Virgin — a little bit of heads up would have been nice to receive from them.”

She said it would make “perfect sense” for Rex to pick up the route.

“We’re a growing region … our commercial activity is high, we are a low-transmission area — we’ve had no COVID cases for many months now,” Cr Pinson said.

“They [Rex] will be well rewarded by our community, I would imagine.

“… As things start to return to some sort of normality in the way of air travel, I would urge people to support those who support our region, and Rex certainly sounds like they may be one of them.”

The mayor said the council had received a lot of interest from other carriers after Virgin Airlines announced last week it was withdrawing its services.

“While some airlines are contracting, an airline is looking at their opportunities too,” she said.

“It’s not all doom and gloom as far as COVID is concerned for air travel and airlines.”