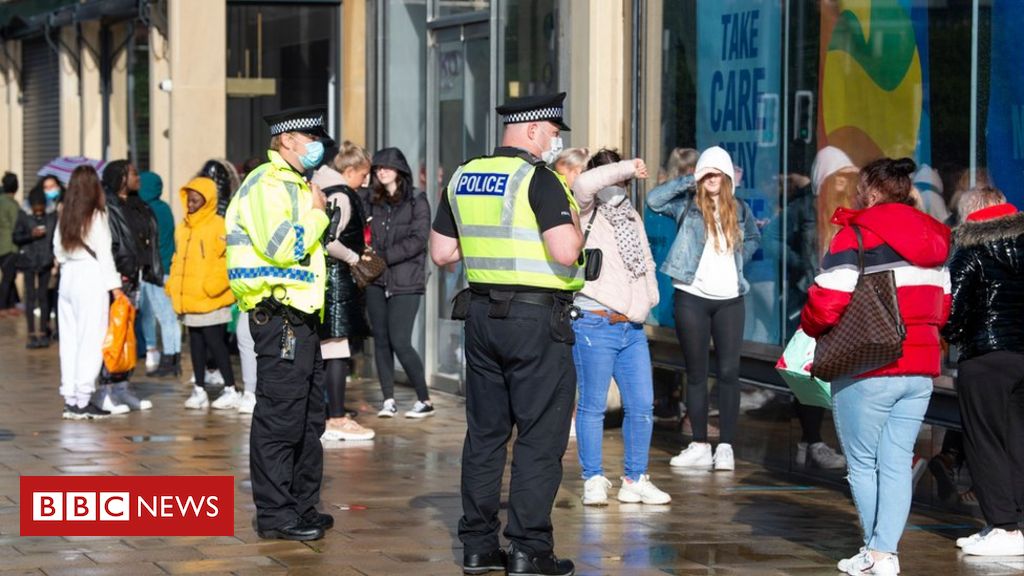 Police, pictured here in Edinburgh in June, now can break up groups larger than six

People should speak to social distancing rule-breakers first before reporting them to police, Prime Minister Boris Johnson has said.

In an interview with the Sun, Mr Johnson said he has “never much been in favour of sneak culture, myself”.

It comes after his colleague, policing minister Kit Malthouse, called on people to report neighbours who were breaking the coronavirus “rule of six”.

The new rules came into force in England, Scotland and Wales this week.

They ban social gatherings of more than six people but vary slightly in the different nations – for example in England and Scotland the law applies both indoors and outdoors, but just indoors in Wales.

Police have the power to break up groups larger than six and people who ignore officers could be fined £100 – doubling with each offence to a maximum of £3,200.

Speaking to the Sun newspaper, Mr Johnson suggested anyone who spots someone breaking the rules should not go straight to the police.

“What people should do in the first instance is obviously if they are concerned is raise it with their friends and neighbours,” he said.

The prime minister was referring to the 1978 film National Lampoon’s Animal House which featured a large toga party.

His comments differ to what his Conservative colleagues have previously said.

Earlier this week, Home Secretary Priti Patel was asked whether she would alert the police about her neighbours if they broke the rules, replying: “I don’t spend my time looking into people’s gardens.”

But pressed further on the topic in the BBC Radio 4 Today interview, she said: “I think anybody would want to take responsibility and ensure we’re not spreading this awful disease and therefore if I saw gatherings of more than six people clearly I would report that.”

She also said families stopping for a chat in the street was considered “mingling” and would also be breaking the rules.

Meanwhile, Mr Malthouse said the public should ring the non-emergency number 101 and pass on details of suspected law-breakers.

He was asked whether a person should report a gathering of seven or more in a neighbour’s garden, and said: “It is open to neighbours to do exactly that through the non-emergency number.

“And if they are concerned and they do see that kind of thing, then absolutely they should think about it.”

Also earlier this week, the chairman of the Police Federation, which represents rank-and-file officers in England and Wales, called for guidance over how to enforce the measures.

A further 3,991 new cases were announced by the government on Wednesday.

Tougher lockdown restrictions are expected to be brought in in north-east England in the coming days – but Mr Johnson has told MPs the government would do “everything in our power” to avoid a second national lockdown.

Mr Johnson also addressed the lockdown in his interview with the Sun, saying: “The only way to make sure the country is able to enjoy Christmas is to be tough now.”

He said ministers “will be looking at” the possibility of telling pubs and restaurants to close earlier.

People should be “both confident and cautious”, he added.

There are several local hotspots in the UK which have seen a spike in cases since the nationwide lockdown ended.