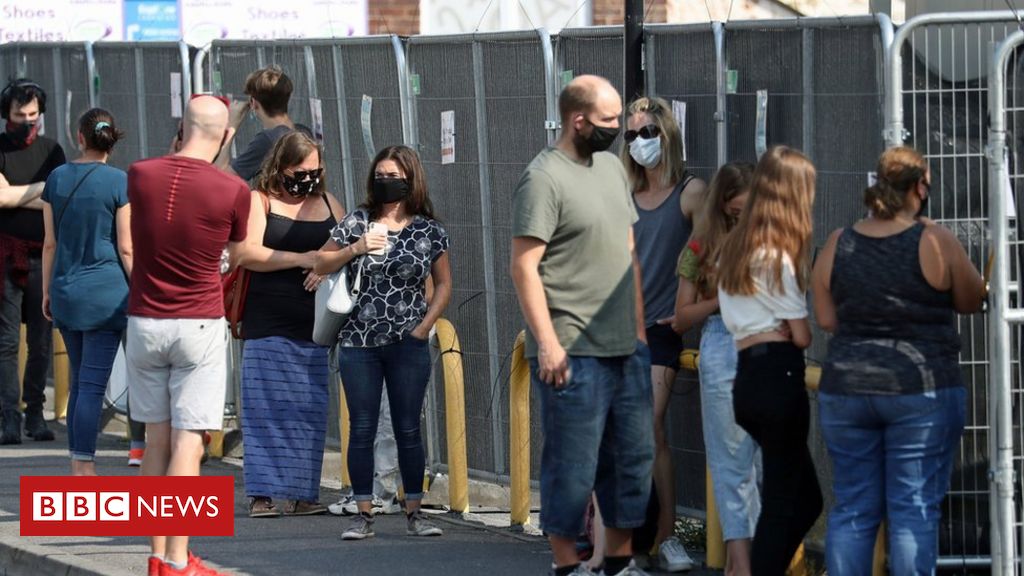 People queue for tests in Southampton

People up and down the country have been blocked from getting coronavirus tests in recent days, as appointments were paused with the system struggling to cope. Yet the government says capacity is higher than ever.

So what’s going on in the UK’s testing system?

Demand for tests has soared, no-one disputes that. What isn’t clear is by how much. It’s hard to know by how much exactly – the figures aren’t capturing all the people who’ve tried to book and haven’t been able to get a test.

The combination of people returning from holiday and children going back to school will have put pressure on the system. And early autumn will have brought other respiratory viruses, with symptoms similar to coronavirus – perhaps especially in children.

For many, the message that it’s essential to get a test if you have symptoms, will have sunk in. Dozens of people have told the BBC of doing so out of a feeling of civic duty.

It’s something the government appears to have underestimated the impact of, says Sir John Bell, of Oxford University.

At the same time, sources have expressed concerns about the “worried well” – people applying for tests even if they don’t have the relevant symptoms. Health Secretary Matt Hancock has claimed a quarter of people wanting tests do not have symptoms, although, when this was queried, the government said this figure was not a formal count.

But it has pointed to reports of whole school year groups being told to get tested, and people asking for tests before and after going on holiday.

There is no shortage of swabs, testing centres and staff. There are almost 400 testing centres in total across the UK, including drive-through and walk-through sites, mobile units set up in hotspots and satellite sites at hospitals and care homes.

But getting an appointment at one of these has been a challenge.

Limited lab capacity means the releasing of new appointments is being held back.

That’s because once you take a swab, there’s a window of time to process it in before it becomes invalid.

So once the labs get behind, there’s no point opening up new appointments to swab people.

If the labs can’t get to them in time because they are dealing with yesterday’s tests, those swabs will be wasted.

The government says testing capacity – which it defines as how many can be processed in the lab each day – is higher than ever.

This is true. The capacity has grown rapidly, with latest figures showing nearly 375,000 tests a day can be processed.

There are four pillars to the testing programme.

The first is basically hospital testing, which is processed in hospital and university labs and is reserved for patients and staff.

The second is the testing carried out in the community – and is the element of the system that there is currently so much focus on.

The other two are the antibody testing programme, which looks at whether people have had the virus previously, and the surveillance programme run by the Office for National Statistics, which is considered to be an essential way of keeping track of the spread of the virus.

But the community labs are maxed out

Community testing capacity represents less than half the total.

And once we dig down more into this data, it becomes clear why tests have had to be rationed.

Nearly all the community testing is processed at one of five mega-labs.

Back in August it was clear they were close to capacity – in fact all the testing capacity was used up on 23 August.

And this goes to the heart of the problem.

So it chose to centralise the system at these large labs and has worked with a variety of partners, including private companies and universities, to run them.

What’s going on in the labs?

Prof Gordon Dougan, from the University of Cambridge, says it is not surprising they have run into problems and struggled to increase capacity to keep pace with demand.

He says despite “valiant efforts, the system is not robust enough” and is vulnerable to failure at multiple levels from sourcing equipment to finding the right staff.

It is understood that one of the biggest limitations is hiring enough qualified people to carry out the tests.

This has become a particular issue as academics and postgraduate students have returned to their usual roles.

Labs have been unable to offer academic staff contracts and more experienced staff have had to go back to their institutions.

This has led to Prime Minister Boris Johnson writing letters to universities asking them to lend their staff and students for a little longer. It’s not clear how many, if any, have agreed to this.

In order to process more tests, labs will need more space, machines and people. This is happening, but it seems not fast enough to keep up with demand.

Lab capacity is being increased. A sixth mega lab in Newport is in the process of opening, and a seventh near Loughborough will follow suit in the coming weeks.

This should have a significant impact on capacity, but in the meantime the government has said it will have to prioritise – that means making sure hospitals, care homes and areas with outbreaks can get access to testing.

But even when these new labs are fully up and running, there are concerns that demand will still outstrip supply.

Cases of coronavirus and other respiratory illnesses are going up, so it seems inevitable more people will be seeking access to tests.

An analysis by Health Data Research UK warned that if just 80% of people with annual coughs and fevers applied for a test, capacity could be exceeded for the whole winter.

Problems getting hold of tests could be a persistent problem throughout the winter.