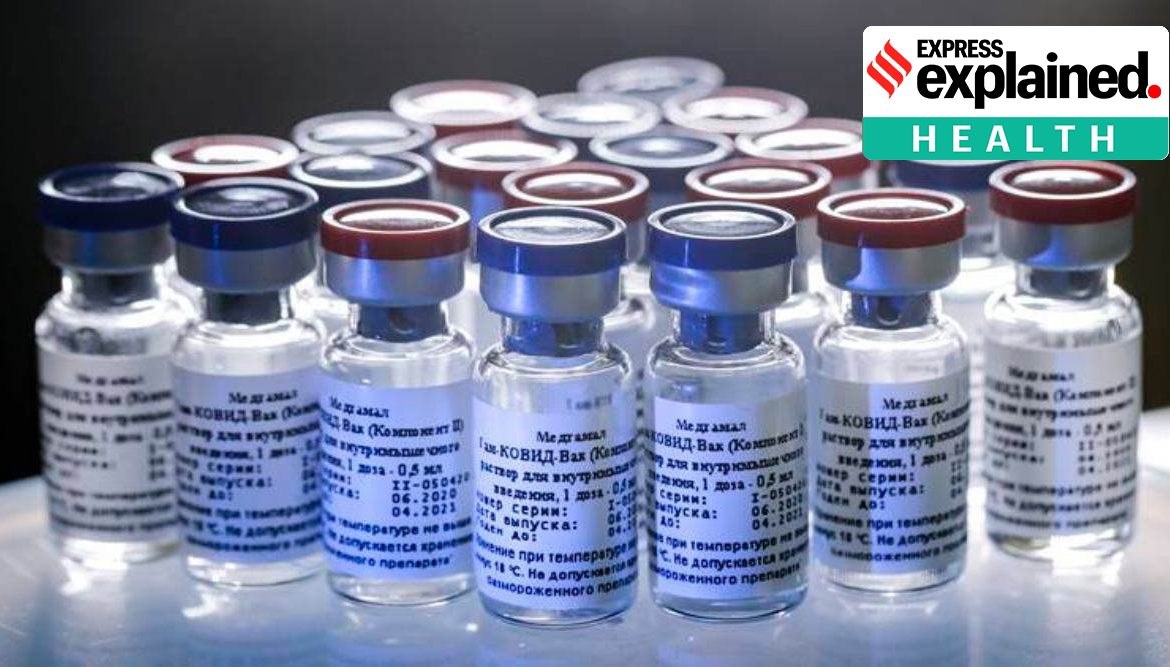 A new vaccine is on display at the Nikolai Gamaleya National Center of Epidemiology and Microbiology in Moscow, Russia. (AP)

Should India’s top drug regulatory body sign off on phase 3 trials in the country, Sputnik V will replace Serum Institute of India’s (SII’s) ‘Covishield’ as the frontrunner in the race to produce a Covid-19 vaccine for India.

What is the Sputnik V vaccine?

This is a vaccine that uses what is known as ‘human adenoviral vector’ technology. Adenoviruses cause a wide range of illnesses ranging from fevers, coughs, and sore throats to pink eye, diarrhoea, and bladder infections. The adenovirus is modified and weakened so that it cannot replicate in the human body. Instead, it will act like a Trojan Horse, carrying instructions for the cells in the human body to produce the spiky outer layer (spike protein) of SARS-CoV-2, the virus that causes Covid-19.

This is expected to help the body recognise the spike protein as a foreign substance and build an immune response against it so that it can tackle the real virus when it tries to infect.

Sputnik V uses two different genetically modified adenoviruses to carry the spike protein. The vaccine containing the second adenovirus is given 21 days after the first one, and is expected to “boost” the body’s immune response and build “long-lasting immunity”.

Developed by Moscow-based Gamaleya Research Institute of Epidemiology and Microbiology, the Sputnik V vaccine was approved for public use in Russia on August 11.

What does DRL’s agreement mean for India? How soon will it be available to the public in this country?

While India has been in discussions with Russia to explore the possibility of using Sputnik V here for around a month now, the DRL deal is the first concrete development that shows the vaccine will come to India.

DRL on Wednesday announced its agreement with the Russian Direct Investment Fund (RDIF) – Russia’s sovereign wealth fund that has been closely involved in these discussions – to carry out phase 3 human clinical trials of the vaccine in India, following which it would distribute the vaccine here for public use.

If the timeline given by RDIF is to be believed, about 100 million (10 crore) Indians can expect to start getting a Covid-19 vaccine by the end of this year. Each dose of the vaccine includes two vials containing separate adenoviral vectors, according to an RDIF spokesperson.

Going by the government’s vaccination priorities, healthcare, and frontline workers, as well as those who work in occupations that would make them vulnerable to Covid-19 exposure, might be the first to get this (or indeed, any other) vaccine. Following this, the older population and those with co-morbidities may get the shot.

Of course, this will depend on how long it takes for the phase 3 trials to conclude in India, and whether India’s regulatory authorities are convinced by the safety and efficacy data generated in these trials.

The development of any vaccine is a long, complex process. What are the things to look out for in the Russian candidate going forward?

This vaccine was approved in Russia even before phase 3 trials were conducted. Even the phase 1 and 2 human trials were conducted on a very small group of fewer than 100 people. While findings from the early studies showed that the vaccine was safe, the relatively small number of volunteers in the trials, and the skipping of phase 3 trials before approvals, has drawn global criticism.

The only way to truly ascertain the safety and effectiveness of this vaccine is to look at long-term information from those vaccinated in the earlier trials, as well as to conduct larger phase 3 trials over a longer period of time.

Don’t miss from Explained | What is serial interval, and how can it be managed to control Covid-19?

These phase 3 trials often enroll thousands of volunteers representing a more diverse population, and checks for whether the vaccine is able to generate the required immune response effectively and without any serious adverse reactions.

To this end, post-registration trials involving 40,000 volunteers are now underway, according to RDIF. Brazil is also expected to approve the vaccine for local use only after phase 3 trials.

How well this vaccine does in India will now depend on the protocol that DRL follows, the results from phase 3 trials here and data generated from post-registration trials in Russia and late-stage trials in other countries. DRL is expected to approach the Indian regulator with its request to conduct the phase 3 trial here “shortly”, according to RDIF.

Don't Miss it With no foreigners allowed in, Thailand is paying its own citizens to go on holiday | ABC News
Up Next It’s ‘highly likely’ that not all Australians will get the COVID-19 vaccine at once. So who will have to wait?