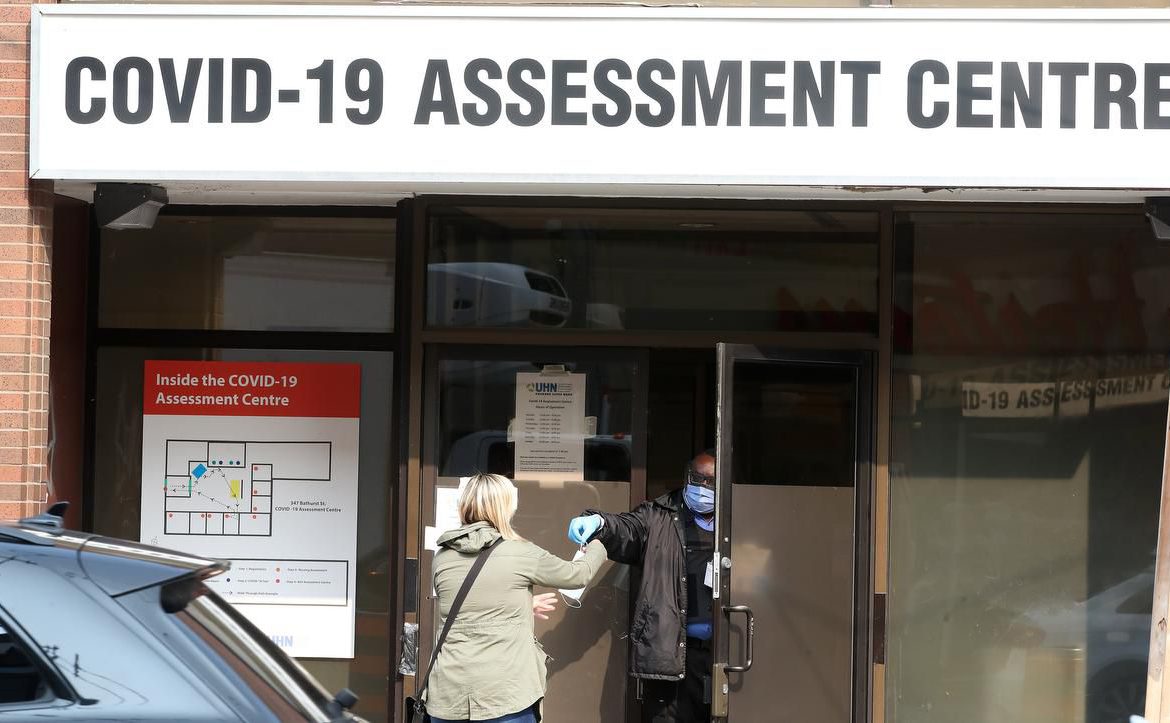 5:15 a.m.: WHO calls for consistent message on virus

7:37 a.m. The number of Americans who sought unemployment benefits last week likely numbered in the hundreds of thousands with COVID-19 seeding broad economic damage nine months after the first case was confirmed in the U.S.

Economists believe that around 850,000 people sought jobless aid, down from 884,000 the week before, according to a survey by the data firm FactSet.

The pandemic has delivered an unprecedented shock to the economy. Until the pandemic upended the operations of American companies, from factories to family diners, weekly jobless aid applications had never exceeded 700,000 in the U.S.

The overall economy, as measured by the gross domestic product, collapsed at an annual rate of 31.7 per cent from April through June, by far the worst three months on record, as millions of jobs disappeared.

The economy and job market have recovered somewhat from the initial shock. Employers added 10.6 million jobs from May through August, but that’s still less than half the jobs lost in March and April.

7:36 a.m. The CEO of the Manitoulin Health Centre is urging calm after Public Health Sudbury & Districts confirmed an Islander has tested positive for COVID-19.

The patient was tested in an assessment centre on Manitoulin, Lynn Foster said in a release Wednesday.

“The management and staff of the Little Current and Mindemoya locations of the Manitoulin Health Centre wish to remind the public to remain calm,” Foster said. “We must continue to follow and encourage others to follow Public Health guidance” to slow the spread of the virus.

7:28 a.m. At least one teacher at a Pembroke high school came to work with symptoms of COVID-19, and more were not wearing masks before an outbreak that has left at least three teachers ill and prompted the first school closure in the province, the Star has learned.

All students at Fellowes High School have been ordered to learn from home, online, “effective immediately … and until further notice,” the Renfrew County District School Board told parents in a letter posted Wednesday on its website.

Read the full story from the Star’s Kristin Rushowy

7:19 a.m. A disconnect between the province’s assurances of smaller in-person class sizes and the reality playing out in Ontario’s classrooms has left parents surprised and doctors worried.

As thousands of students return to schools this week in the age of COVID-19, some parents expecting smaller classes were shocked to learn their children are in classes roughly the same size or larger than usual.

“I think there’s a huge disconnect between the messaging coming from the government and the reality that parents are experiencing,” said parent Laura Boudreau, who was initially told last Friday that her five-year-old son, Miller, a student at Howard Junior Public School near Roncesvalles Ave. and Bloor St. W., would be in a senior kindergarten class of 15 students.

Then, on Monday night — the day before school started — Boudreau and her husband Ian received an email from the school with final classroom allocations and were stunned to see that Miller would be in a kindergarten class with a total of 29 students.

7:06 a.m.: British Prime Minister Boris Johnson warned Thursday that authorities will have to impose tougher measures to combat the spread of COVID-19 and “protect’’ the Christmas holidays as the government prepared to introduce stricter measures in northeast England.

Johnson’s comments came amid reports that the government plans to impose a 10 p.m. curfew on pubs and restaurants in response to a recent jump in confirmed coronavirus cases. Local officials asked for more restrictions now to prevent a tighter lockdown later.

Johnson wrote in a piece published in The Sun newspaper that the only way to be certain the country can enjoy the winter holidays “is to be tough now.’’

6:29 a.m.: Africa’s top public health official says the Africa Centers for Disease Control and Prevention has been in talks with nine vaccine manufacturers about potential coronavirus vaccine clinical trials on the continent.

John Nkengasong says the talks include the Oxford University group that’s developing a vaccine with drug company AstraZeneca and already has a clinical trial in South Africa.

Health experts say COVID-19 vaccine trials must include Africans to make sure any effective vaccine can be rolled out quickly in Africa along with the rest of the world.

5:37 a.m.: Hawaii’s governor says that starting Oct. 15, travellers arriving from out of state may bypass a 14-day quarantine requirement if they test negative for the coronavirus.

Gov. David Ige said Wednesday that travellers will have to take the test within 72 hours before their flight arrives in the islands. Ige says drugstore operator CVS and health care provider Kaiser Permanente will conduct the tests.

The state has previously delayed the start of the pre-travel testing program twice as COVID-19 cases spiked on the U.S. mainland and in Hawaii.

Leaders hope pre-travel testing will encourage tourists to return while keeping residents safe. Tourism traffic to the state has plunged more than 90% during the pandemic, closing hundreds of hotels and putting many people out of work.

5:31 a.m.: The U.N. humanitarian chief says reports from inside Syria point to “a much broader spread” of COVID-19 cases than the 3,628 confirmed cases conveys.

Mark Lowcock told the U.N. Security Council on Wednesday that the extent of the outbreak won’t be known until laboratory testing is increased across the country.

He said: “We do know that community transmission is widespread, as almost 90% of newly confirmed cases cannot be traced to a known source.”

He added: “Infection rates among health workers have also been rising.”

5:20 a.m.: Pakistani authorities have closed as many as 22 schools across the country after detecting violation of social distancing regulations amid a steady decline in COVID-19 cases.

Thursday’s announcement by the military-backed command and control centre came after health officials alerted the government that students at some schools were violating social distancing guidelines.

5:15 a.m.: The emergencies chief of the World Health Organization says scientific disagreements over COVID-19 interventions — like masks and vaccines — shouldn’t be treated as “some kind of political football,” but acknowledged that “it isn’t easy for everyone to be on message all the time.”

Asked to respond to the open disagreements between U.S. President Donald Trump and the director of the U.S. Centers for Disease Control and Prevention over the effectiveness of masks and when a coronavirus vaccine might be available, Dr. Michael Ryan said “it is important that we have consistent messaging from all levels.”

“This is complicated stuff,” Ryan said at a press briefing on Thursday. “What is important is that governments (and) scientific institutions step back, review the evidence and give us the most comprehensive, easy-to-understand…information so that people can take the appropriate action.” He warned against turning scientific messaging into “some kind of political football.”

5:12 a.m.: When Narayan Mitra died on July 16, a day after being admitted to the hospital for fever and breathing difficulties, his name never appeared on any of the official lists put out daily of those killed by the coronavirus.

Test results later revealed that Mitra had indeed been infected with COVID-19, as had his son, Abhijit, and four other family members in Silchar, in northeastern Assam state, on India’s border with Bangladesh.

But Narayan Mitra still isn’t counted as a coronavirus victim. The virus was deemed an “incidental” factor, and a panel of doctors decided his death was due to a previously diagnosed neurological disorder that causes muscle weakness.

“He died because of the virus, and there is no point lying about it,” Abhijit Mitra said of the finding, which came despite national guidelines that ask states to not attribute deaths to underlying conditions in cases where COVID-19 has been confirmed by tests.

Such exclusions could explain why India, which has recorded more than 5.1 million infections — second only to the United States — has a death toll of about 83,000 in a country of 1.3 billion people.

India’s Health Ministry has cited this as evidence of its success in fighting the pandemic and a basis for relaxing restrictions and reopening the economy after Prime Minister Narendra Modi ordered a strict lockdown of the entire population earlier this year.

But experts say the numbers are misleading and that India is not counting many deaths.

Now, the Jewish High Holidays look to be similarly subdued.

Israel has seen new daily cases of COVID-19 skyrocket in recent weeks, climbing to more than 5,000 on Wednesday — one of the highest per capita infection rates in the world. Since the pandemic began this year, it has recorded more than 169,000 cases, including 1,163 deaths, as of Wednesday, according to Health Ministry figures.

Religious and secular Israelis alike mark Rosh Hashanah with festive holiday feasts with family and friends. They pack synagogues, often spending hours in prayer, especially during the fast of Yom Kippur, the Day of Atonement, which falls later this month.

But this year, traditional family gatherings will be muted, synagogue prayers will be limited to small groups and travel restrictions will leave many roads deserted. Some of the liberal streams of Judaism, particularly in the United States, are turning to technology to help connect people.

4:05 a.m.: The British Columbia government is expected to reveal how it plans to stimulate an economic rebound from the COVID-19 pandemic.

Last week, James announced the province’s most recent financial numbers from April to June project an economic decline of 6.7 per cent for this year.

She said the budget is forecast to post a deficit of almost $13 billion for the 2020-21 fiscal year.

4 a.m.: Prime Minister Justin Trudeau will begin consultations today with opposition leaders about next week’s throne speech, which could theoretically bring down his minority Liberal government if no opposition party supports it.

He is to speak by phone with Bloc Québécois Leader Yves-Francois Blanchet, who is in self-isolation along with most of his 31 MPs after an aide tested positive Monday for COVID-19.

Trudeau also plans to speak with the Green party’s parliamentary leader, Elizabeth May.

He is expected to speak with Conservative Leader Erin O’Toole, who is also in isolation after a staffer tested positive, and NDP Leader Jagmeet Singh on Friday.

The throne speech is well on its way to being completed but government officials maintain that doesn’t mean the opposition consultations are an empty gesture.

Thursday 8:40 p.m.: A saliva-based COVID-19 test is likely to be available this fall, say private and public health officials touting various methods under consideration across the country as lineups grow at COVID-19 assessment centres and cases emerge in newly reopened schools.

Public Health Ontario’s chief of microbiology and laboratory science lists several issues to be resolved before broad provincial use but expects saliva collection will soon make it easier to detect infection, especially among children and others unable to tolerate a nasopharyngeal swab.

“I do foresee it being an option in the near term,” Dr. Vanessa Allen said in a recent interview.

“We’re aiming in the space of weeks to months. Sometime later this fall looks very probable.”

While not as accurate as the gold standard method — in which a long, flexible swab is inserted deep into the nostril — saliva collection is easier, meaning this approach could capture infections in people who otherwise would not be tested but should be, says Allen.

To be clear, these are not the at-home saliva tests that generate an immediate result, but lab-based tests that use the same molecular analysis to detect novel coronavirus in a nasopharyngeal sample.