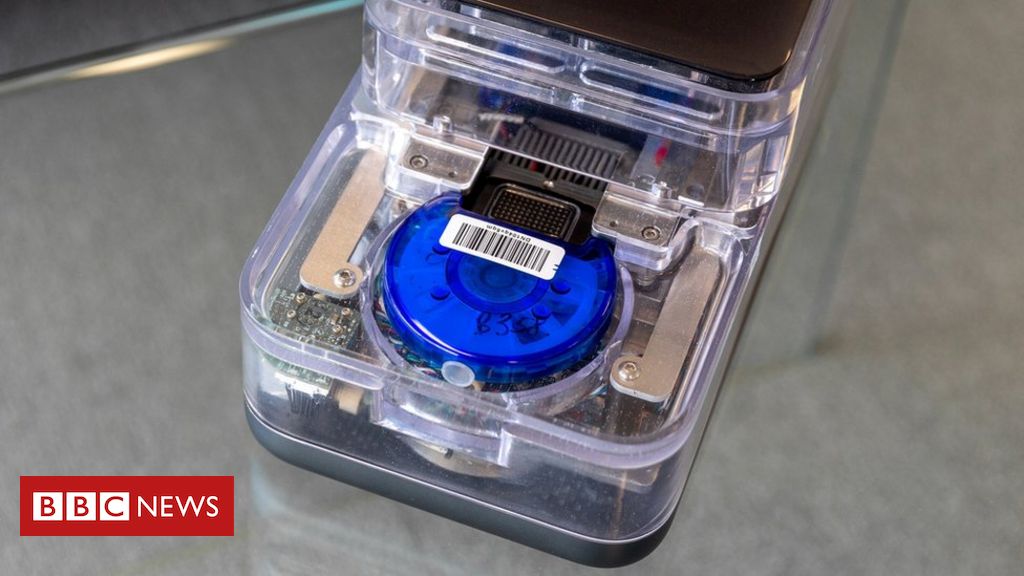 A rapid test can accurately diagnose a coronavirus infection within 90 minutes without needing a specialist laboratory, say scientists.

The device is already being used in eight NHS hospitals to quickly identify patients who are carrying the virus.

However, experts warn that the kit will not be a solution to the beleaguered Test and Trace programme.

The device, developed by the company DnaNudge, can be used by anyone capable of taking a swab of the nose or throat.

The swab is placed inside a disposable blue cartridge which contains the chemicals needed for the test.

This in turn is slotted into a shoebox-sized machine to perform the analysis.

Media caption”A device this small is effectively a laboratory” – Prof Chris Toumazou, of DnaNudge, explains how the new test works

The study, published in the Lancet Microbe, compared results when samples from 386 people were given both the DnaNudge and standard laboratory tests.

“The performance was comparable, which is very reassuring when you’re trying to bring in a new technology,” said Prof Graham Cooke, from Imperial College London.

“Many tests involve a trade-off between speed and accuracy, but this test manages to achieve both.”

The UK has already ordered 5,000 of the Nudgebox machines and 5.8 million of the disposable cartridges.

However, there is a major drawback as each box can handle only one test at a time. So during a day, one box could perform around 16 tests.

Prof Cooke said: “They are useful in clinical settings when you are trying to make a rapid decision.”

He described a patient last week who was rapidly identified as having Covid and started on the drugs dexamethasone and remdesivir.

The tests could become even more useful for hospitals in the future as it is theoretically possible to test for coronavirus, flu and respiratory syncytial virus (a major reason young children are admitted to hospital) at the same time.

However, the capacity issue means the test cannot solve the problems with NHS Test and Trace or help with Operation Moonshot and the plans for 10 million tests per day.

Testing 60,000 people at a stadium ahead of a football match would require 60,000 boxes, but it may be useful at smaller venues.

Prof Lawrence Young, who was not part of the research and from the University of Warwick, said the technology was “innovative”.

He added: “The CovidNudge test could have an important role where near-patient, real-time decision-making is necessary, such as screening patients for admission to hospital or for surgery.

“[However,] this is not the answer to universal mass testing. “

Don't Miss it The Virus: updates on coronavirus for 13 March | ABC News
Up Next Has Australia really had 60,000 undiagnosed COVID-19 cases?