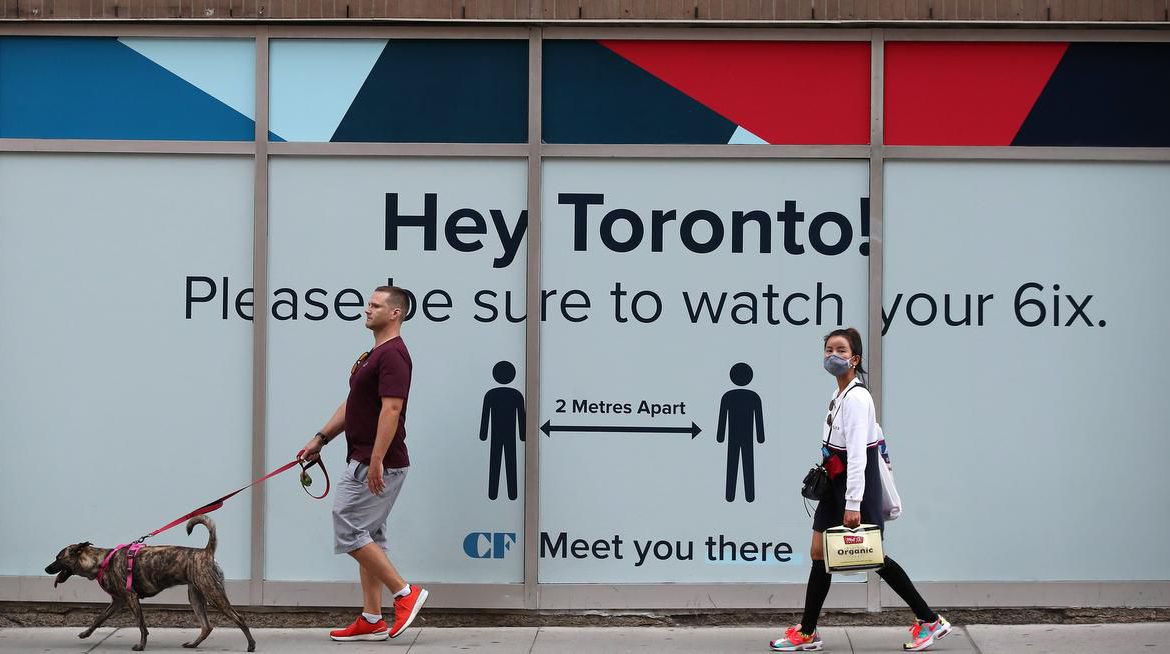 8:07 a.m. Young people are reporting higher levels of stress and anxiety due to the COVID-19 pandemic compared to those over age 60 despite their significantly lower risk of dying from the virus itself, a new study has revealed.

Levels of generalized anxiety disorder and major depressive disorder are proving to be the highest and more prevalent among those under 25, while those over age 60 reported the lowest levels for both disorders.

These numbers are revealed in new research published in early September by Dr. Izunwanne Nwachuchwu from the University of Calgary, alongside researchers from the University of Alberta and Alberta Health Services. The study shows that 96 per cent of people under age 25 said they’ve experienced moderate or high levels of stress as a result of the pandemic, compared to 68 per cent of people over the age of 60.

Read the full story by the Star’s Nadina Yousif

7:31 a.m. Canada’s top curling teams are trying to cobble together a competitive fall season despite the COVID-19 pandemic decimating the calendar.

The Grand Slam of Curling was whittled from six events this winter to just two scheduled for next April and November’s Canada Cup of Curling was cancelled, creating a competitive void for the country’s elite curlers.

A slew of September and October bonspiels across Canada have been called off, but some remain on the calendar.

Curling Canada’s return-to-play guidelines provide a template for events to go ahead with several modifications on and off the ice to prevent the spread of the virus.

“We want to play as much as we can under whatever guidelines are set and get some competition in,” said skip Brad Jacobs of Sault Ste. Marie, Ont.

“That’s about all we can hope for. It’s not about going out and trying to win prize money and points. None of that stuff really matters.

6 a.m.: British Health Secretary Matt Hancock has hinted that fresh restrictions on social gatherings in England could be announced soon as part of efforts to suppress a sharp spike in confirmed coronavirus cases.

Following reports that the government was considering fresh curbs on the hospitality sector, such as pubs and restaurants, Hancock said this is a “big moment for the country.”

He said that another national lockdown is the “last line of defence” and that most transmissions of the virus are taking place in social settings.

Hancock says the government’s strategy over the coming weeks is to contain the virus as much as possible “whilst protecting education and the economy.”

The government has come under sustained criticism in the past week following serious issues with its virus testing program.

5:45 a.m.: Confirmed cases of the coronavirus have topped 30 million worldwide, according to a Johns Hopkins University tally.

The worldwide count of known COVID-19 infections climbed past 30 million on Thursday, with more than half of them from just three countries: the U.S., India and Brazil, according to the tally kept by Johns Hopkins researchers.

The number increased by 10 million in just over a month; global cases passed 20 million on August 12.

5:31 a.m.: Joe Biden on Thursday went after President Donald Trump again and again over his handling of COVID-19, calling Trump’s downplaying of the pandemic “criminal” and his administration “totally irresponsible.”

“You’ve got to level with the American people — shoot from the shoulder. There’s not been a time they’ve not been able to step up. The president should step down,” the Democratic presidential nominee said to applause from a CNN drive-in town hall crowd in Moosic, outside his hometown of Scranton.

Speaking about Trump’s admission that he publicly played down the impact of the virus while aware of its severity, Biden declared: “He knew it and did nothing. It’s close to criminal.”

Later, Biden decried Americans’ loss of basic “freedoms” as the U.S. has struggled to contain the pandemic, like the ability to go to a ball game or walk around their neighbourhoods. “I never, ever thought I would see just such a thoroughly, totally irresponsible administration,” he said.

Thirteen of the cases reported Friday were in the northern province of Shaanxi, whose capital Xi’an is a major industrial centre. The eastern financial and business hub of Shanghai reported 12.

China has gone more than a month without reporting any cases of locally transmitted coronavirus cases within its borders.

5:18 a.m.: U.N. World Food Program chief David Beasley is warning that 270 million people are “marching toward the brink of starvation” because of the toxic combination of conflict, climate change and the COVID-19 pandemic.

Beasley on Thursday urged donor nations and billionaires to contribute $4.9 billion to feed the 30 million he said will die without U.N. assistance.

He reminded the U.N. Security Council of his warning five months ago that “the world stood on the brink of a hunger pandemic,” and welcomed the response, which averted famine and led countries to fight back against the coronavirus.

Beasley said the U.N. food agency is keeping people alive “and avoiding a humanitarian catastrophe” but he said “the fight is far, far, far from over.”

5:14 a.m.: India’s coronavirus cases have jumped by another 96,424 infections in the past 24 hours, showing little signs of slowing down.

The Health Ministry on Friday raised the nation’s confirmed total since the pandemic began to more than 5.21 million. It said 1,174 more people died in the past 24 hours, for a total of 84,372.

India is expected within weeks to surpass the reported infections seen in the United States, where more than 6.67 million people have been reported infected, the most in the world.

India’s Prime Minister Narendra Modi on Thursday made a fresh appeal to people to use face masks and maintain social distance as his government chalked out plans to handle big congregations expected during a major Hindu festival season beginning next month.

5:10 a.m.: The Australian government on Friday announced a 5 million Australian dollars ($3.7 million) grant to the national news agency as part of pandemic-related assistance to regional journalism.

Australian Associated Press is critical to media diversity and has consistently demonstrated its commitment to accurate, fact-based and independent journalism over its 85-year history, including a strong contribution to regional news, Communications Minister Paul Fletcher said in a statement.

AAP Chair Jonty Low and Chief Executive Emma Cowdroy welcomed the funding as an “endorsement of the role that AAP plays in providing a key piece of Australia’s democratic Infrastructure.”

5 a.m.: Israel is set to go back into a full lockdown later Friday to try to contain a coronavirus outbreak that has steadily worsened for months as its government has been plagued by indecision and infighting.

The three-week lockdown beginning at 2 p.m. (1100 GMT) will include the closure of many businesses and strict limits on public gatherings, and will largely confine people to their homes. The closures coincide with the Jewish High Holidays, when people typically visit their families and gather for large prayer services.

In an address late Thursday, Prime Minister Benjamin Netanyahu warned that even stricter measures may be needed to prevent hospitals from being overwhelmed. There are currently more than 46,000 active cases, with at least 577 hospitalized in serious condition.

“It could be that we will have no choice but to make the directives more stringent,” Netanyahu said. “I will not impose a lockdown on the citizens of Israel for no reason, and I will not hesitate to add further restrictions if it is necessary.”

Under the new lockdown, nearly all businesses open to the public will be closed. People must remain within 1 kilometre (0.6 miles) of home, but there are several exceptions, including shopping for food or medicine, going to work in a business that’s closed to the public, attending protests and even seeking essential pet care.

4:05 a.m.: Four conservative-minded premiers are to issue today their wish list for next week’s throne speech on which the fate of Justin Trudeau’s minority Liberal government could hinge.

Quebec’s François Legault, Ontario’s Doug Ford, Alberta’s Jason Kenney and Manitoba’s Brian Pallister plan to hold a news conference in Ottawa to spell out what they hope to see in the speech.

Billions more for health care is likely to top their list.

Ford and Legault last week called on Ottawa to significantly increase the annual federal transfer payments to provinces and territories for health care.

The transfer this year will amount to almost $42 billion under an arrangement that sees it increase by at least three per cent each year.

On top of that, the federal government is giving provinces and territories $19 billion to help them cope with the fallout from the COVID-19 pandemic, including some $10 billion for health care.

4 a.m.: A new survey finds that young people have been vaping less frequently since the COVID-19 pandemic began.

The survey, conducted by the Lung Association of Nova Scotia and Smoke-Free Nova Scotia, finds that respondents decreased vaping to five days per week from six, on average.

They also cut back to an average of 19 vaping episodes per day, down from 30.

The survey funded by Heart & Stroke also found the decrease in vaping frequency is most notable in British Columbia and Ontario.

The researchers say it may be related to warnings of potential complications from COVID-19 for e-cigarette users.

The survey heard from more than 1,800 respondents between 16 and 24 years old, and found most begin vaping at around the age of 15.

Provincial health officer Dr. Bonnie Henry announced 165 new cases since Wednesday. That raises the total number of cases since the pandemic began to 7,663. There are 1,705 active cases, an increase of 91 from yesterday, and of nearly 300 from a week ago, the Sentinel reports.

Health Minister Adrian Dix said it’s important to put the high case count in context; yesterday, there were 7,674 tests conducted across B.C., the highest number in a single day since the pandemic began.