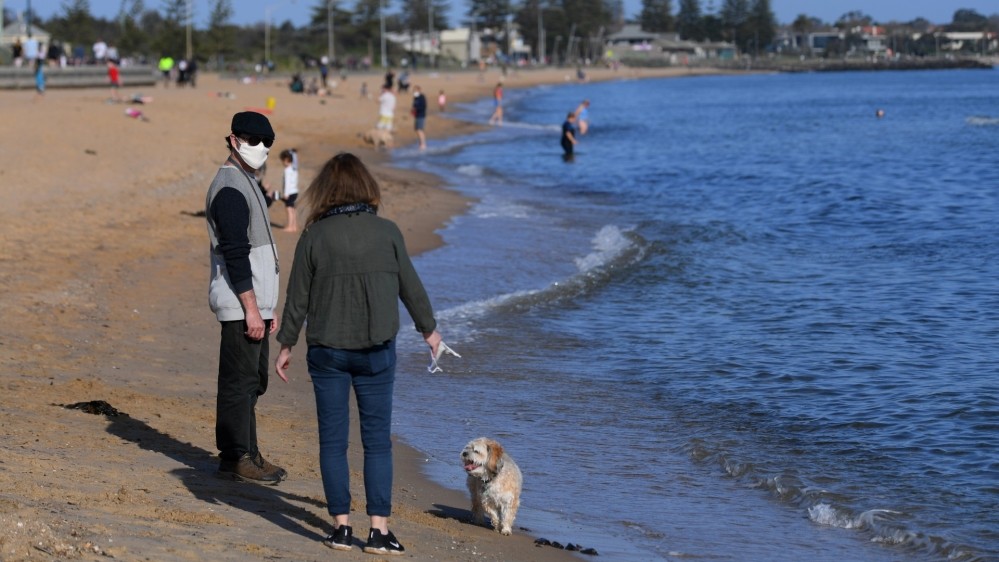 Guatemalan President Alejandro Giammattei has tested positive for COVID-19, as has France’s Economy Minister Bruno Le Maire.
France logged a record daily jump of more than 13,000 new cases; Spain ordered a partial lockdown in its capital, Madrid, and the surrounding region, while Ireland and Greece tightened restrictions in their respective capitals amid surges in infections.
UK Prime Minister Boris Johnson said his country was seeing a second wave of COVID-19, adding that while he did not want a second national lockdown, the government may need to introduce new restrictions.
More than 30 million people around the world have been diagnosed with the novel coronavirus and 949,686 have died, according to Johns Hopkins University. Some 20.7 million people have recovered.

Russia reported 6,065 new coronavirus cases, the first time the daily tally has been higher than 6,000 in two months. The national tally of infections rose to 1,097,251.

The coronavirus crisis centre said 144 people had died of the disease in the last 24 hours, bringing the Russian death toll to 19,339.

Britain is likely to need to reintroduce some coronavirus lockdown measures sooner rather than later, a former senior government health advisor said.

“I think some additional measures are likely to be needed sooner rather than later,” Neil Ferguson, a professor of epidemiology at London’s Imperial College told the BBC news network.

Professional rugby in Ireland could cease to exist if supporters cannot return to stadiums in large numbers amid the COVID-19 pandemic, IRFU chief Philip Browne has said.

The Irish union is projecting revenue losses exceeding 30 million euros ($35.51 million) due to the pandemic.

Browne said that despite implementing cost-cutting measures, including pay cuts of up to 20 percent and job redundancies, the union’s financial position is not sustainable.

India’s parliament session that began this week is likely to be cut short after 30 lawmakers were found infected with the coronavirus, two senior parliament officials said, as the number of cases in the country rose to 5.3 million.

The Indian parliament met for the first time in six months on September 14 and was to function until October 1, but the two officials said its duration could be reduced by a week.

An Indian woman wearing white protective gear mourns after taking a glimpse of her husband’s body, a victim of COVID 19, at a cremation ground in Gauhati, India. India has 85,619 deaths to date, according to Johns Hopkins Univeristy [Anupam Nath/AP]

India maintained its surge in coronavirus cases, adding 93,337 new confirmed infections and 1,247 deaths in the past 24 hours.

The health ministry raised the nation’s caseload to more than 5.3 million. A total of 85,619 people have died.

India has been reporting the highest single-day rise in the world every day for more than five weeks. It’s expected to become the pandemic’s worst-hit country within weeks, surpassing the United States.

Philippines President Rodrigo Duterte has decided to retain the one-metre (three-foot) social distancing requirement on public transport to reduce coronavirus infections, rejecting moves to reduce it to 30 centimetres, according to his spokesman.

Health experts have warned that reducing gaps between passengers in trains, buses and jeepneys could result in a surge of infections in the Philippines, which has the most confirmed COVID-19 cases in Southeast Asia.

Duterte studied recommendations and decided to retain the one-metre distancing requirement, including a ban on eating and speaking in public transport, presidential spokesman Harry Roque told state-run PTV4 network. Passengers still need to wear face shields and masks at all times, he added.

Erin O’Toole, the new leader of Canada’s main opposition party, has tested positive for the coronavirus.

The Conservative party said O’Toole was feeling well and that his family tested negative.

The Brazilian city of Rio de Janeiro authorised football fans to return to stadiums from October 4, after a six-month hiatus for the coronavirus pandemic.

“Rio city hall announces the return of fans to stadiums,” the city said in a statement. “They will be required to wear protective masks and undergo temperature checks at the entrance. Ticket sales will be online to avoid crowds.”

The decision still needs a green light from the Brazilian Football Confederation.

Personal data of nearly 400,000 people tested for coronavirus in Slovakia ended up unsecured online after a breach in the state health system, the country’s national health information centre (NCZI) confirmed.

The breach has since been repaired, NCZI boss Peter Bielik told journalists, after a group of so-called ethical hackers had flagged the issue.

“We did not have the intention at all to look for data, it was a complete coincidence that we stumbled upon it during a simple Google search on the internet,” IT specialist Pavol Luptak told news site Pravda.sk on Thursday.

Mayor Bill de Blasio said he is “very confident” that New York City will meet a revised timeline to bring public school students back to classrooms within the next two weeks, following closures because of the coronavirus pandemic.

De Blasio had delayed the reopening plan for the United States’s largest school district for the second time since it was announced in July, citing a shortage of staff and supplies.

The Australian state at the centre of the country’s novel coronavirus outbreak reported its lowest daily increase of infections in three months, putting it on course to relax a hard lockdown in the capital city by the end of the month.

Victoria, Australia’s second most populous state and home to a quarter of its 25 million people, recorded 21 new cases of COVID-19 in the prior 24 hours, less than half the previous day’s number and its lowest since June 24.

Victoria also reported seven new deaths related to the virus, taking the national total to 844, according to government figures. The state has had 90 percent of Australia’s coronavirus-related deaths.

Every Emmy Award handed out on Sunday will come with something extra – a $100,000 donation to fight child hunger brought on by the coronavirus crisis.

The Television Academy announced that each network and streaming service competing on the telecast has pledged the donation for every Emmy they win.

With 23 Emmys being handed out and the academy committing $500,000, that will mean a donation of $2.8m to No Kid Hungry, a group working to relieve child hunger in the United States during the pandemic.

For all the key developments from yesterday, September 18, go here.

Don't Miss it Victoria records 35 new coronavirus cases and seven further deaths overnight | ABC News
Up Next A new Canadian Covid-19 gargle test ‘one of the first of its kind’ in the world, doctor says