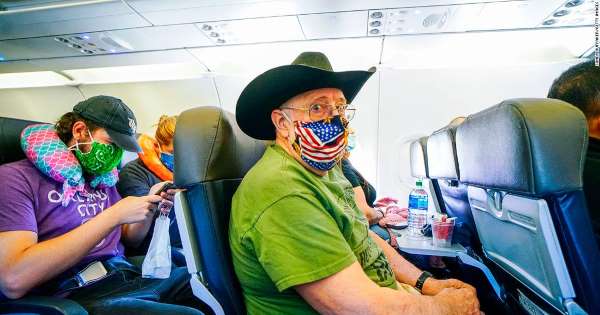 The young woman and her sister had traveled across Europe just as the coronavirus pandemic was taking off there, visiting Milan and Paris before heading to London.

When the woman left London on March 1, she had a sore throat and cough as she boarded a flight home to Vietnam, but no one noticed.

By the time she got off the flight in Hanoi 10 hours later, 15 other people who had been on the plane with her were infected, researchers reported Friday.

This story is one of two published Friday demonstrating how coronavirus can spread on airline flights, and suggesting that simply spacing people out a little will not fully protect them.

In another incident, passengers on a flight from Boston to Hong Kong appear to have infected two flight attendants.

A team from Vietnam tracked down a cluster of cases linked to the flight that arrived in Hanoi from London on March 2.

“A 27-year-old businesswoman from Vietnam, whom we identified as the probable index case, had been based in London since early February,” Nguyen Cong Khanh of the National Institute of Hygiene and Epidemiology in Hanoi and colleagues wrote.

“On February 22, case 1 and her sister returned to Milan, Italy, and subsequently traveled to Paris, France, for the yearly Fashion Week before returning back to London on February 25,” they wrote in the journal Emerging Infectious Diseases.

At this time, coronavirus was starting to spread fast in Italy but very few cases had been reported in Britain.

The woman boarded a flight to Hanoi on March 1.

“She was seated in business class and continued to experience the sore throat and cough throughout the flight,” the researchers added.

The investigators said there was no other likely way any of the 15 others could have been infected other than exposure to the sick patient on the flight.

“The most likely route of transmission during the flight is aerosol or droplet transmission from case 1, particularly for persons seated in business class,” they wrote.

“We conclude that the risk for on-board transmission of SARS-CoV-2 during long flights is real and has the potential to cause COVID-19 clusters of substantial size, even in business class–like settings with spacious seating arrangements well beyond the established distance used to define close contact on airplanes,” Khanh’s team wrote.

“As long as COVID-19 presents a global pandemic threat in the absence of a good point-of-care test, better on-board infection prevention measures and arrival screening procedures are needed to make flying safe.”

In the second incident, a couple flew from Boston to Hong Kong in business class on March 9. They both exhibited symptoms after they arrived and were diagnosed with coronavirus.

Contact tracing found two flight attendants were also positive for the virus. “The only location where all four persons were in close proximity for an extended period was inside the airplane,” Deborah Watson-Jones of the London School of Hygiene & Tropical Medicine and colleagues wrote in a second report in the US Centers for Disease Control and Prevention’s Emerging Infectious Diseases journal.

“Genetic sequencing linked all four cases. The near full-length viral genomes from all four patients were 100% identical,” Watson-Jones and colleagues wrote.