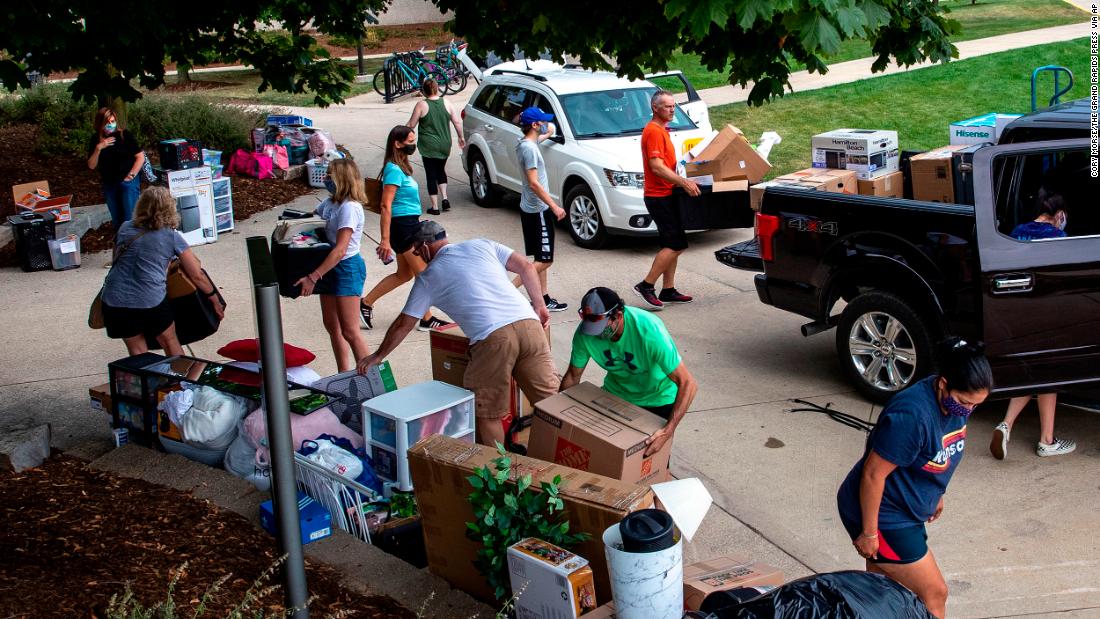 “We are out of options,” Providence College President the Rev. Kenneth Sicard said Thursday. “If we are not successful, we will have no alternative other than to shut down our campus for the remainder of the fall semester.”

The college moved to remote learning for at least a week, Sicard said Thursday. Indoor and outdoor gatherings and travel to bars, restaurants and neighborhood businesses are not allowed. All students living on campus will be tested for Covid-19 and those living off campus are not allowed to leave their apartments, Sicard said.

Violations will result in “immediate interim suspensions,” the president said.

By Friday evening, the number of Providence College students who had tested positive had risen to about 120 in three days, according to the Rhode Island Department of Health.

The school’s web site says just under 5,000 students are enrolled.

Providence College’s drastic moves echo similar measures university and local leaders have taken in recent weeks to keep Covid-19 cases at bay. Colleges and universities in all 50 states have reported infections. In Michigan, local health officials announced a two-week “staying in place” order for Grand Valley State University students who live in one part of Ottawa County, according to a news article posted on the university’s website. The university also said Thursday it would reward students who complete Covid-19 self-assessments every day for the rest of the semester with $200, which would go toward the winter 2021 semester.

And in New York, Gov. Andrew Cuomo directed the State Liquor Authority to keep a closer eye on bars and restaurants where college students tend to gather to ensure they’re following safety protocols.

So far, they’ve found “egregious violations” in several counties, the governor’s office said in a statement.

“With significant outbreaks linked to colleges and universities across the nation, these stepped-up efforts will help keep our students, faculty, staff, and the surrounding communities safe,” the statement said.

The boost in efforts comes as daily Covid-19 cases in the US have been ticking up recently, ahead of what could be a complicated flu season. Following weeks of decline, new daily cases averaged about 39,700 over a week as of Thursday. That average has risen in the past days to 13% higher than the week before, according to data from Johns Hopkins University.More than 6.7 million Americans have now been infected with the virus since the start of the pandemic and more than 198,900 people across the US have lost their lives, according to Johns Hopkins.

The Providence College president said off-campus students who have tested positive should return home if they can while others will be relocated to campus facility or a hotel room.

But leading infectious disease expert Dr. Anthony Fauci has warned against colleges sending infected students home, saying they could take the virus with them.

“You send them back to their community, you will in essence be reseeding with individuals who are capable of transmitting infection, many communities throughout the country,” he said earlier this month. “So it’s much, much better to have the capability to put them in a place where they could comfortably recover.”

Academics aren’t the only area of college life affected by the coronavirus. Some schools have seen their efforts to resurrect college sports haunted by Covid-19 infections.

“This is unfortunate, but luckily Coach is feeling fine,” FSU Athletics Director David Coburn said. “We are proceeding with our Covid protocols as we would with any other case. Coach is isolated, and university tracing staff is handling the contact tracing as they normally do. We will continue to test staff and student-athletes as we have been.”

And a highly anticipated match-up Saturday between Baylor and Houston was postponed as a result of Covid-19 cases on the Baylor team, the universities announced Friday. Baylor was unable to meet the Big 12 conference’s stipulations that a team must have at least 53 players available to compete. It was the third game postponed in as many weeks for Houston due to Covid-19.Meantime, the American Academy of Pediatrics (AAP) recommended that young athletes who had moderate Covid-19 symptoms should get an electrocardiogram, or EKG, and potentially be referred to a cardiologist to determine whether they’re well enough to play.

The AAP’s updated guidance for children and teens who play sports clarified that they should not show symptoms of Covid-19 for 14 days and obtain clearance from a primary care physician before returning to practice and competitions.

“Parents, children and coaches need to make safety protocols a priority,” said Dr. Susannah Briskin, one of the authors of the guidance, said.

The virus hits some communities harder

Communities of color have already been hit much harder by the pandemic in the US.

“Hospitalization rates are three times higher for Hispanics compared to Whites,” he added.

The pandemic, Adams said, has both exploited and exacerbated the health disparities that exist throughout the country and has also highlighted structural conditions that contribute to those disparities.

“Social distancing and teleworking are critical to preventing spread of coronavirus, yet only one in five African Americans and one in six Hispanic Americans have a job that allows him to work from home,” Adams said.

People of color are also more likely to live in “densely packed urban areas” and in multi-generational homes, he said, and take public transportation.

“Combined, these and other factors create a greater risk for spread of a highly contagious disease like Covid-19,” he added.