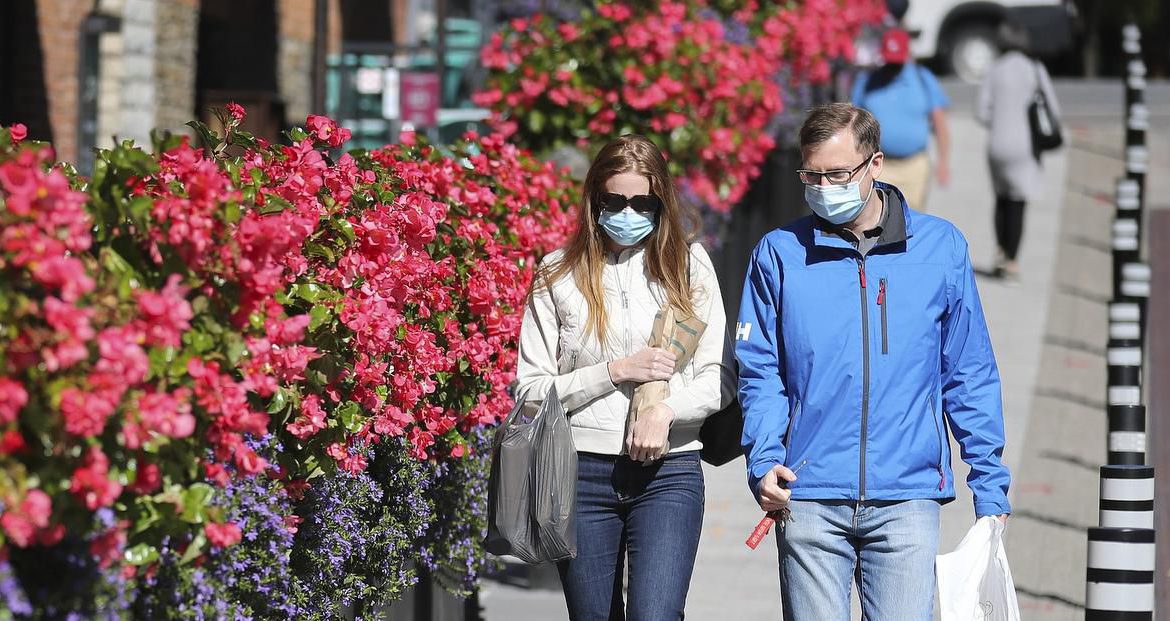 The latest coronavirus news from Canada and around the world Sunday. Web links to longer stories if available.

11:42 a.m.: Quebec’s COVID-19 case numbers hit their highest numbers since the end of May this weekend, but Alexandre Laberge-Ayotte wasn’t worried.

Laberge-Ayotte and a handful of other protesters stood outside a Montreal subway station on Saturday, chanting “Liberty!” and waving Quebec flags in one of a number of demonstrations taking part around the province to protest mandatory mask wearing and call for an end to the government state of emergency aimed at fighting the pandemic.

This demonstration was small, with two dozen protesters or less. Others have been much larger, including one that took place a week earlier in Montreal that drew thousands of people.

The province reported 427 new cases on Saturday, which was already the highest daily tally since late May.

Health officials also say five additional deaths attributed to the novel coronavirus were reported today. The province says one of the deaths occurred in the last 24 hours, while the other four took place between Sept. 13-18.

Quebec has now reported 67,542 total cases of COVID-19 and 5,802 deaths attributed to the novel coronavirus since the pandemic began. Authorities say hospitalizations increased by seven cases over the past 24 hours, for a total of 138.

Of those, 38 people were in intensive care — the same number as the previous day.

10:43 a.m.: Ontario is reporting 365 new cases of COVID-19 today, along with one new death linked to the novel coronavirus.

The daily tally is lower than totals posted in the previous two days, but still among the highest numbers seen since early June.

The government recorded more than 400 new cases on both Friday and Saturday.

10:41 a.m.: Students in Iowa’s largest school system are facing the possibility that this most unusual school year could stretch into next summer, and the district could be hit with crippling bills because of a dispute with the governor over the safety of returning to classrooms during the coronavirus pandemic.

Des Moines school officials have repeatedly refused to abide by Republican Gov. Kim Reynolds’ order requiring the state’s 327 school districts to hold at least half their classes in-person rather than online. For Des Moines, it’s a question of trying to keep its more than 33,000 students and 5,000 staffers from contracting the disease. But after the school board last week again voted to violate Reynolds’ order, the governor called the action “unacceptable” and began the process for punishing the district.

Reynolds has dismissed Des Moines’ officials’ concerns, noting that nearly all other Iowa districts have reopened their classrooms despite some virus outbreaks and the occasional need to quarantine students, saying, “Where there’s a will, there’s a way.”

Sunday 7:32 a.m.: Election administrators in British Columbia are ready with hand sanitizer for voters and personal protective equipment for polling station workers as part of a pandemic plan similar to one used recently in New Brunswick.

Elections B.C. spokesman Andrew Watson said staff have consulted with their counterparts in the eastern province, where voters were the first in Canada to cast their ballots during COVID-19, in case Premier John Horgan calls a snap fall election.

Watson said administrators of elections in Saskatchewan are preparing for a vote that will happen by October 26, adding his office began working with provincial health officials in April as the reality of a pandemic and a possible election set in.

Besides procuring safety items, ensuring physical distancing protocols are followed has been part of the training for election officials, he said.

Don't Miss it Coronavirus UK update live: Latest lockdown news as Londoners could be told to work from home again
Up Next A Guide to State Coronavirus Reopenings and Lockdowns