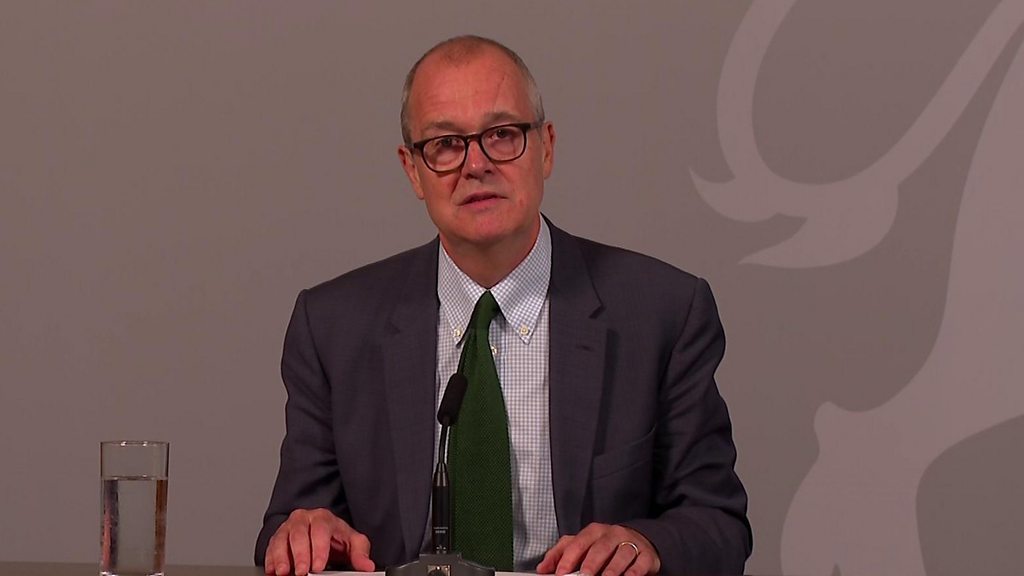 The UK could see 50,000 new coronavirus cases a day by mid-October without further action, the government’s chief scientific adviser has warned.

Sir Patrick Vallance said that “would be expected to lead to about 200 deaths per day” a month after that.

It comes as the PM prepares to chair a Cobra emergency committee meeting on Tuesday morning, then make a statement in the House of Commons.

On Sunday, a further 3,899 daily cases and 18 deaths were reported in the UK.

Speaking at Downing Street alongside chief medical adviser, Prof Chris Whitty, Sir Patrick stressed the figures given were not a prediction, but added: “At the moment we think the epidemic is doubling roughly every seven days.

“If, and that’s quite a big if, but if that continues unabated, and this grows, doubling every seven days… if that continued you would end up with something like 50,000 cases in the middle of October per day.

“Fifty-thousand cases per day would be expected to lead a month later, so the middle of November say, to 200-plus deaths per day.

“The challenge, therefore, is to make sure the doubling time does not stay at seven days.

Prof Whitty added that if cases continued to double every seven days as Sir Patrick had set out, then the UK could “quickly move from really quite small numbers to really very large numbers because of that exponential process”.

“So we have, in a bad sense, literally turned a corner, although only relatively recently,” he said.

The rising case numbers could not be blamed on an increase in testing as there is also an “increase in positivity of the tests done”
Around 70,000 people in the UK are estimated to currently have the disease – and about 6,000 per day are catching it (based on an ONS study)
Less than 8% of the population has been infected, although the figure could be as high as 17% in London
The rising transmission is a “six-month problem that we have to deal with collectively”
The virus is not milder now than in April, despite claims to the contrary
It is possible “that some vaccine could be available before the end of the year in small amounts for certain groups” but “the first half of next year” is much more likely

The government’s most senior science and medical advisers are clearly concerned about the rise in cases that have been seen in recent weeks.

The warning about 50,000 cases a day by mid-October is stark. We don’t know for sure how many cases there were at the peak in spring (as there was very limited testing in place) although some estimates put it at 100,000.

However, they were also at pains to point out it was not a prediction.

Even among the government’s own advisers there is disagreement over whether what we are seeing is the start of an exponential rise or just a gradual increase in cases, which is what you would expect at this time of year as respiratory viruses tend to circulate more with the reopening of society.

Instead, what was quite telling was the clear social messaging. Even those who are not at a high risk of complications should, they say, play their part in curbing the spread of the virus because if it spreads then difficult decisions will be needed that have profound societal consequences.

But the big unanswered question is what ministers will do next. There is talk of further restrictions being introduced, but that is far from certain.

A couple of things are in our favour that were not in the spring. Better treatments for those who get very sick are now available, while the government is in a better position to protect the vulnerable groups.

Should ministers wait and see what happens? Or should they crack down early, knowing that will have a negative impact in other ways?

Prof Whitty also said that even though different parts of the UK were seeing cases rising at different rates, and even though some age groups are affected more than others, the evolving situation “is all of our problem”.

He added that evidence from other countries showed infections were “not staying just in the younger age groups” but were “moving up the age bands”.

He said mortality rates from Covid-19 were “significantly greater” than seasonal flu, which killed around 7,000 annually or 20,000 in a bad year.

The briefing comes as areas in north-west England, West Yorkshire, the Midlands and four more counties in south Wales will face further local restrictions from Tuesday.

And additional lockdown restrictions will “almost certainly” be put in place in Scotland in the next couple of days, First Minister Nicola Sturgeon has said.

Prime Minister Boris Johnson is to speak with leaders of devolved administrations later.

“Hopefully this will be with four-nations alignment, but if necessary it will have to happen without that,” Ms Sturgeon said.

Welsh Health Minister Vaughan Gething added: “It may be the case that UK-wide measures will be taken but that will require all four governments to exercise our varying share of power and responsibility to do so.”

Downing Street will have to introduce extra restrictions to try to slow down the dramatic resurgence of coronavirus.

You would only have to have dipped into a minute or two of the sober briefing from the government’s most senior doctor and scientist on Monday morning to see why.

What is not yet settled however, is exactly what, exactly when, and indeed, exactly where these restrictions will be.

Here’s what it is important to know:

The government is not considering a new lockdown across the country right now.

The prime minister is not about to tell everyone to stay at home as he did from the Downing Street desk in March.

Ministers have no intention at all to close schools again.

Nor, right now, are they planning to tell every business, other than the non-essential, to close again.

What is likely is some kind of extra limits on our huge hospitality sector.

Asked about reports of disagreements among cabinet ministers about whether or not to impose a second lockdown, Transport Secretary Grant Shapps told BBC Breakfast: “A conversation, a debate, is quite proper and that is exactly what you’d expect.

“Everyone recognises there is a tension between… the virus and the measures we need to take, and the economy and ensuring people’s livelihoods are protected.”

‘Damage to our economy’

Labour, meanwhile, has urged the government to avoid a second national lockdown.

Shadow health secretary Jonathan Ashworth said: “This rapid spike in infections was not inevitable, but a consequence of the government’s incompetence and failure to put in place an adequate testing system.

“Labour’s priority is that there must be a national effort to prevent another national lockdown.

“The government must do what it takes to prevent another lockdown, which would cause unimaginable damage to our economy and people’s wellbeing.”

Don't Miss it Coronavirus: What’s happening in Canada and around the world on Monday
Up Next 120,000 UK deaths in second Covid wave: scientists warn of worst-case scenario – BBC News