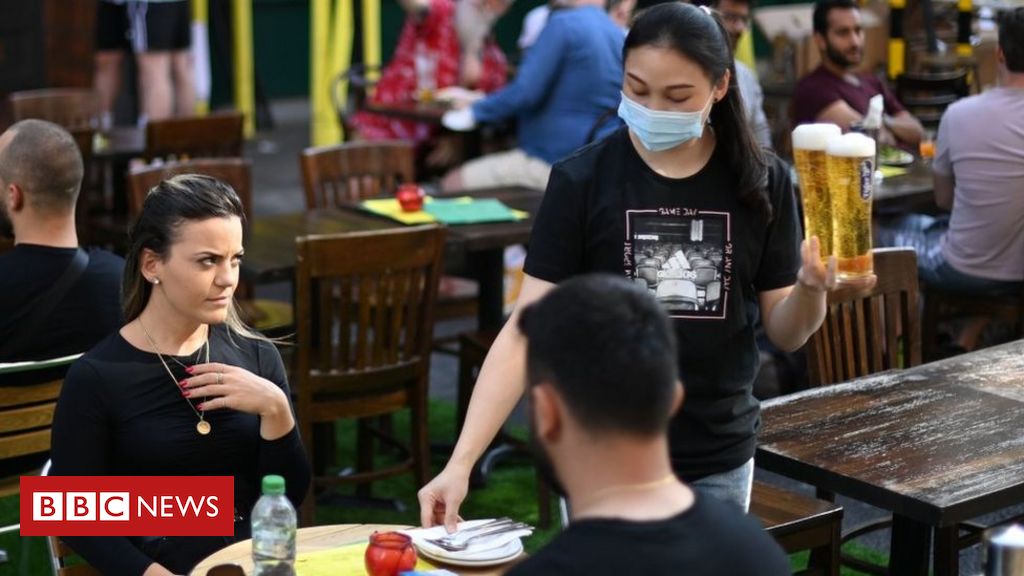 The UK’s coronavirus alert level is being upgraded from 3 to 4, meaning transmission is “high or rising exponentially”, its chief medical officers have said.

It comes after the government’s scientific adviser warned there could be 50,000 new coronavirus cases a day by mid-October without further action.

The prime minister will make a statement in the Commons on Tuesday.

BBC political editor Laura Kuenssberg said it sounded “very likely” that pubs and other venues in England will be forced to have 22:00 closing times, alongside other measures.

In a statement confirming their recommendation on moving to level 4, the chief medical officers for England, Scotland, Wales and Northern Ireland said cases were now “rising rapidly and probably exponentially in significant parts of all four nations”.

They urged people to follow government guidelines “to avoid significant excess deaths and exceptional pressure in the NHS” over the autumn and winter.

“This country now faces a tipping point in its response and it is vital everybody plays their part now to stop the spread of the virus and protect lives,” he said.

The alert level, which is recommended by the Joint Biosecurity Centre, was reduced from level 4 to 3 on 19 June – which indicated the virus was “in general circulation” but there could be a “gradual relaxation of restrictions”.

The proposed upgrading comes as the PM prepares to chair a Cobra emergency meeting on Tuesday morning – which will be attended by the leaders of Scotland, Wales and Northern Ireland.

Amid data showing London was “catching up” with Covid-19 hotspots in northern England, the capital’s Mayor Sadiq Khan said he believed acting early, “rather than having to impose more stringent measures later”, was the right thing to do both for public health and the economy.

“If, and that’s quite a big if, but if that continues unabated, and this grows, doubling every seven days… if that continued you would end up with something like 50,000 cases in the middle of October per day.

“Fifty-thousand cases per day would be expected to lead a month later, so the middle of November say, to 200-plus deaths per day.

“The challenge, therefore, is to make sure the doubling time does not stay at seven days.

The move to level 4 should not come as a surprise given the warning from the UK’s two most senior pandemic advisers this morning.

Infections are rising – although some experts question whether the situation is as dire as Prof Chris Witty and Sir Patrick Vallance set out when they raised the prospect of 50,000 cases a day by mid-October.

Cases were always expected to increase at this time of year when respiratory viruses tend to circulate more coupled with the continued re-opening of society.

Certainly the trajectory of countries like France and Spain is not as sharp as the worst-case scenario put forward.

But it is clear the government wants to act early this time – one of the big criticisms is that they were slow to introduce lockdown in March, which resulted in more deaths.

Level 4 paves the way for extra restrictions to be introduced with an announcement expected on Tuesday.

Officials are very aware a fine balance needs to be navigated, which is why a full lockdown is not on the cards.

Schools will certainly be protected.

But any restrictions have a cost to society. Go too far and the risk is the cure becomes worse than the disease.

The rising case numbers cannot be blamed on an increase in testing as there is also an “increase in positivity of the tests done”
Around 70,000 people in the UK are estimated to currently have the disease – and about 6,000 per day are catching it (based on an ONS study)
Less than 8% of the population has been infected to date, although the figure could be as high as 17% in London
Even though different parts of the UK are seeing cases rising at different rates, and some age groups are affected more than others, the evolving situation has to be seen as a problem for everyone without exception
Evidence from other countries shows infections are “not staying just in the younger age groups” but are “moving up the age bands”
The rising transmission is a serious “six-month problem that we have to deal with collectively” – but science will eventually “ride to our rescue”
The virus is not milder now than in April, despite claims to the contrary
It is possible “that some vaccine could be available before the end of the year in small amounts for certain groups” but “the first half of next year” is much more likely

On Sunday, the prime minister held a meeting in Downing Street with Prof Whitty, Chancellor Rishi Sunak and Health Secretary Matt Hancock to discuss possible further measures for England, ahead of an expected announcement on Tuesday.

Shadow health secretary Jon Ashworth said Labour did not want to see another lockdown but it would be understandable if new measures were introduced as the “exponential growth of the virus cannot be ignored”.

Downing Street will have to introduce extra restrictions to try to slow down the dramatic resurgence of coronavirus.

You would only have to have dipped into a minute or two of the sober briefing from the government’s most senior doctor and scientist on Monday morning to see why.

What is not yet settled however, is exactly what, exactly when, and indeed, exactly where these restrictions will be.

Here’s what it is important to know:

The government is not considering a new lockdown across the country right now.

The prime minister is not about to tell everyone to stay at home as he did from the Downing Street desk in March.

Ministers have no intention at all to close schools again.

Nor, right now, are they planning to tell every business, other than the non-essential, to close again.

What is likely is some kind of extra limits on our huge hospitality sector.

Restrictions on households mixing indoors will be extended to all of Northern Ireland from 18:00 BST on Tuesday.

And additional lockdown restrictions will “almost certainly” be put in place in Scotland in the next couple of days, First Minister Nicola Sturgeon has said.

“Hopefully this will be with four-nations alignment, but if necessary it will have to happen without that,” she said.

Welsh Health Minister Vaughan Gething added: “It may be the case that UK-wide measures will be taken but that will require all four governments to exercise our varying share of power and responsibility to do so.”

Meanwhile, the health secretary announced a new exemption to local restrictions in England for formal and informal childcare arrangements, covering those looking after children under the age of 14 or vulnerable adults.