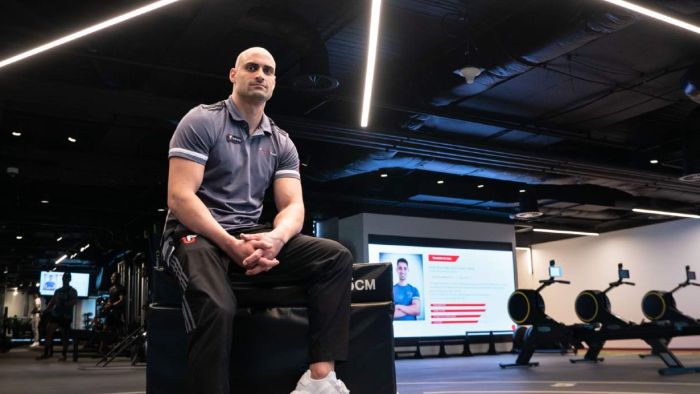 Anthony Kerkmez thought he found the perfect location when he opened his swanky new gym in Parramatta’s CBD at the start of the year.

But that all changed when the pandemic hit a month later.

Thousands of workers from surrounding office buildings, who would have been potential clients at his state-of-the-art facility, suddenly worked from home.

“We have NAB’s head office across from us, we have Sydney Water to the right, we have University of Western Sydney, Chamber of Commerce, the Department of Education and the Department of Finance, Services and Innovation, it’s enormous,” Mr Kerkmez said.

“About 32,000 people are supposed to be in the towers around us and at the moment now I can probably say there’s 2 per cent.”

Catch up on all the big COVID-19 news from September 21 in our coronavirus blog. A number of people have cancelled or frozen their membership at the gym.(ABC News: Jack Fisher)

Across the state, more than 40 per cent of office workers, including accountants, managers and administration staff are working from home, according to the latest research from the University of Sydney Business School.

Report co-author Matthew Beck said people were slowly returning to the office, but many people had no timeframe to return.

Many people who signed up to Universal Fitness after it opened have cancelled or frozen their memberships.

“My business partner and I started this up with our own good intentions using our hard-earned money,” Mr Kerkmez said.

Mr Kerkmez admits JobKeeper was a lifesaver, allowing him to keep all his staff.

But with payments set to be reduced next week, there is increasing pressure on staff to sign up more gym members to keep the business afloat.

Joel Perera, one of Universal Fitness’ personal trainers, doesn’t think it will be easy.

“When we first started I managed to build up the classes to 30 people but when we returned [after temporarily closing due to government restrictions] I had one person per class so it was a huge noticeable difference,” he said.

The drop in office workers in Parramatta has dented trade at Sheng Xia’s cafe Bartelli.

Located next to courts and Government offices, business was always good, until six months ago.

“Now we hardly get any catering requests because no one is working in the office and there are no meetings.”

Mr Xia says JobKeeper and a reduction in rent has helped but “every week we are losing money”.

“The big problem is we don’t know how long it will be when people will come back.

“I try very hard to keep my staff but it’s very tough.

“I’ve had to use all the money from my savings.”

After running the cafe for seven years, he’s contemplating shutting down permanently.

“If it keeps going like this, I will probably have to close my business.”

Sheng Xia is worried about the future of his cafe.(ABC News: Jonathan Hair)

The latest Google mobility data shows foot traffic around workplaces in the City of Parramatta Council area is down 27 per cent compared to a baseline in the first five weeks of the year before the pandemic began.

If that figure doesn’t improve, Schon Condon, President of the Parramatta Chamber of Commerce, believes there will be catastrophic consequences for Sydney’s second CBD.

“Without that commuter traffic there is no life blood in the city,” he said.

He is calling on the State Government to start encouraging workers to return to the office and breathe new life into the city’s struggling businesses.

She is thankful she was able to pivot her Parramatta business, Nailed by La Rouge, and sell some of her products, like press-on nails and merchandise, online.

However, she is still feeling the effects of the deserted CBD.

“The office workers at Parramatta CBD probably make up about 40-50 per cent of my clientele and made up a large proportion of my regulars,” she said.

“I was convenient and close to their work but now a lot of them are working from home, obviously not in the area, or not coming in to see me so regularly so it’s made quite a drastic drop in my trade.”

She hopes Parramatta will soon be bustling with office workers again.

“I know office work as we know it will change, a lot of people might be working from home permanently,” she said.

“But there are so many office buildings in Parramatta, surely they’ve got to do something with them.”