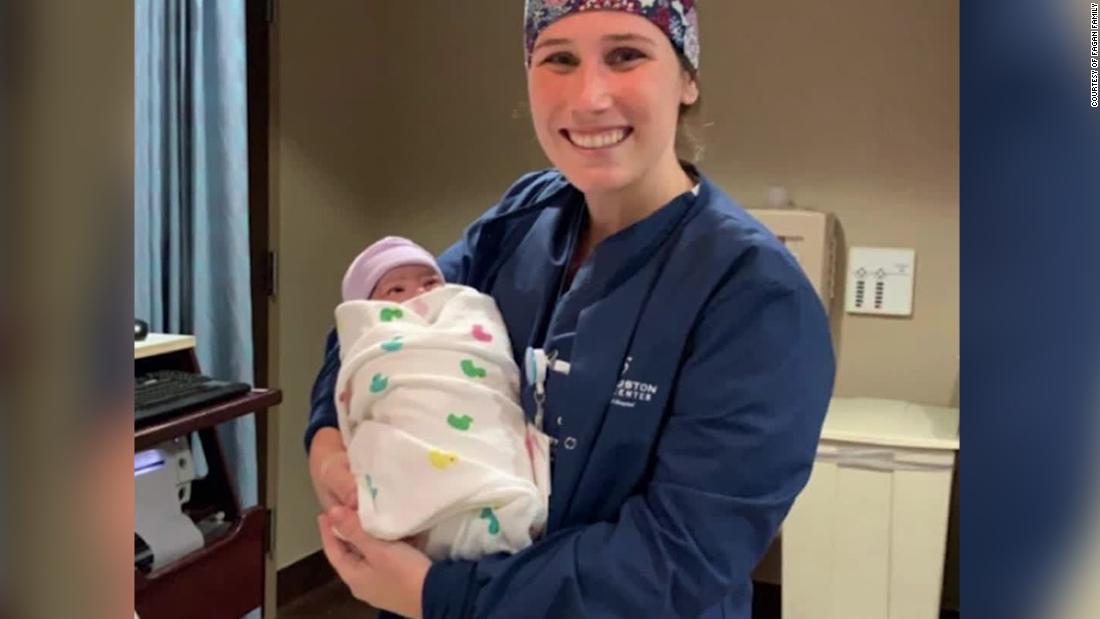 Fagan had just started her second year of residency in Houston when she got sick, the GoFundMe page said.

While she mostly worked delivering babies, Fagan was doing a rotation in the ER treating Covid patients, the post said. Despite a history of asthma, upper respiratory infections and pneumonia, her sisters shared with CNN affiliate KHOU, going into work was “what (Adeline) wants to be doing.”

“She wants to get out of bed every morning and deliver babies and help women,” Maureen Fagan told KHOU.

Adeline Fagan arrived the morning of July 8 feeling good and “excited to see patients,” but by the evening of her 12-hour shift, she began to feel “under the weather,” the initial post on her GoFundMe page said.

Her symptoms were mostly intense flu-like that escalated within the week to a hospital stay. She spent weeks in the hospital battling Covid-19, was given several different respiratory therapies and put on dozens of drugs, none of which she positively responded to.

On August 3, before entering an experimental drug trial, Adeline had to be intubated and placed on a ventilator since her lungs could no longer support her, the GoFundMe post said. On August 4, she was placed on ECMO, extracorporeal membrane oxygenation, to oxygenate her blood while the ventilator opened her lungs through positive pressure. Fagan’s family projected on the GoFundMe page that she would be on the ventilator and ECMO for at least six to eight weeks in hopes that her lungs would heal themselves.

Fagan did not survive. She was 28 years old, according to her sister, Maureen Fagan.

“The time the world stopped for a moment and will never be the same. Our beautiful daughter, sister, friend, physician, Adeline Marie Fagan, MD passed away,” the post, written by Fagan’s father, Brant, stated Saturday morning.

Adeline Fagan’s sister, Natalie Fagan, told KHOU that “from the beginning of time her sister wanted to be a doctor.”

The GoFundMe post went on to thank everyone who had supported Adeline Fagan. Since it was created on August 10, the GoFundMe page raised more than $160,000 by more than 3,000 donors.

“Even in this darkest of times, there are good people willing to share a piece of themselves for the sake of another,” Fagan’s father wrote.

He also encouraged mourners to “be an ‘Adeline’ in the world. Be passionate about helping others less fortunate, have a smile on your face, a laugh in your heart, and a Disney tune on your lips.”

Adeline Fagan had been doing well in the final days of her life, and the family had been given a good report on Friday night, the post read. Fagan’s parents, who reside in New York but had traveled to Houston to be with their daughter, received a phone call Friday night after one of Adeline’s nurses had found her unresponsive.

A CT scan revealed massive amounts of damage caused by a brain bleed, and her medical team was looking for permission to perform a procedure to relieve the pressure.

“The neurosurgeon said it was a ‘1 in a million’ chance she would even survive the procedure, but that Adeline would have several severe cognitive and sensory limitations if she did survive,” the statement read.

The family did not respond to an email sent to the GoFundMe page.

Don't Miss it Canadian coronavirus spike pushes authorities to step up powers to limit large gatherings
Up Next Coronavirus and the environment: Reduced pollution, increase in plastic waste | COVID-19 Special