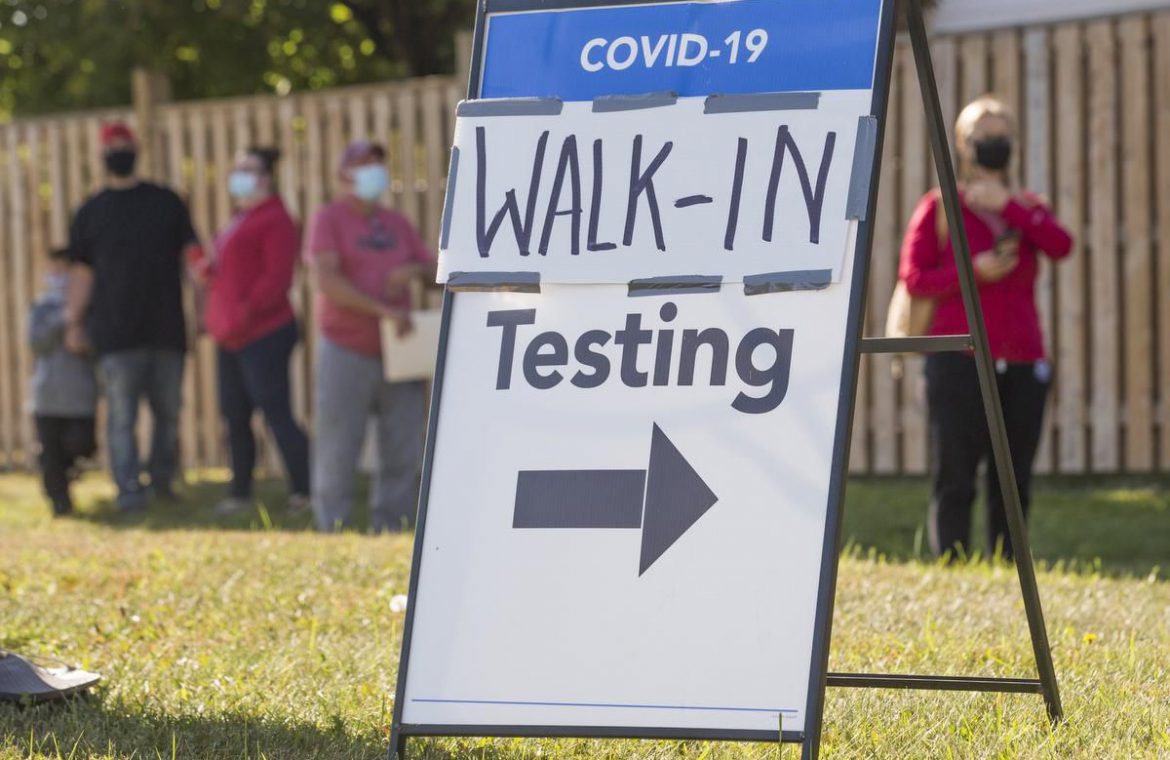 Amidst increasing numbers of new COVID-19 cases daily in Ontario, experts are warning that the continued low rates of death and hospitalization from the disease should not lead to complacency.

Deaths and hospitalizations are what are known as “lagging indicators” — that is, they do not rise and fall immediately with increasing or decreasing rates of infection, but manifest later for serious cases.

In other words, it can take several weeks after infection for a patient to end up in hospital or die.

On Monday, Ontario’s rolling, seven-day average of new cases continued its upward trend, reaching 364. The actual number of new confirmed and probable cases reported Monday by the province’s local public health units was 552, the most recorded in a single day since mid-April. At the same time, the province reported two deaths in the previous 24 hours, and 65 current hospitalizations due to the virus. Of those hospitalized, 22 were in intensive care, with 12 of those patients on ventilators.

The fact that hospitalizations and deaths are lagging indicators is likely not the whole story, Deonandan said.

Because Ontario is testing more than it did in March and April, more cases — including new and milder cases — will be found, he said.

In addition, infections are happening in younger demographics than during the initial wave of the virus when residents of long-term-care homes were hit the hardest.

“The biggest chunk of our deaths earlier were in that population, and if they’re no longer as vulnerable, then the death rates are going to come down. As we know, it’s people under 40 getting it, and they’re less likely to die.”

Finally, Deonandan said, we are getting better at treating COVID-19 now that ventilator settings are better understood and new drugs have been introduced that increase survival rates.

In what follows, we take a look at the current situation in Ontario with commentary from infectious disease experts.

Who is getting the disease?

Twentysomethings account for about 19 per cent of positive cases in the province overall, the highest proportion of cases in any age group, according to an analysis of provincial data by the Star’s Andrew Bailey.

This was not the case at the start of the pandemic, but the trend has amplified in recent weeks.

It’s why, says Colin Furness, an infection-control epidemiologist with the University of Toronto, the recent rise in cases here is due to a number of outbreaks — and not a second wave — the result of last-ditch social gatherings among young people as the summer waned, when cases were low and people felt they were safe.

But he is worried about what could happen in the fall.

“My concern is that the really cold weather hasn’t hit us yet, and when cold weather comes everything changes, and we could have a vicious second wave,” said Furness, who pointed out the virus thrives in cold weather.

In the summer, when temperatures are warm, droplets get heavier and fall to the ground because they collect moisture once a person has exhaled them, he said.

But in dry air, they evaporate very quickly and they get smaller and lighter and stay in the air longer, which could make them more dangerous, he said.

It could also mean they live on surfaces for longer periods of time, although, so far, research has shown that transmission through air droplets is the primary way the virus is being transmitted.

“If people will be good with their masks and be careful and keep their bubbles low, we’ll do OK,” said Furness. “But if we don’t, if we carry on in the half-serious and half-concerned way that we are now, then it’s going to be very unpleasant.”

Todd Coleman, an epidemiologist and assistant professor in health sciences at Wilfrid Laurier University, echoed Deonandan’s point, saying that because a greater proportion of young people are currently getting COVID-19, we aren’t seeing a corresponding increase in deaths.

“Symptom manifestations are less severe in the younger group compared to the older group. So just by default, with a shifting of the average age of infection to a lower group means that we’re going to see lower numbers of deaths and lower numbers of hospitalizations,” he said.

He stressed, however, that we shouldn’t let down our guard.

“Even though we’re seeing younger age groups getting infected at higher proportions than the rest of the population, they don’t simply hang out with each other. They interact with younger people, they interact with older people, it’s not self-contained within an age group,” Coleman said. “It can spread quite easily to one of those other age groups depending on how much you don’t adhere to social distancing.”

Where are the highest numbers of cases?

Toronto led the province with 184 new cases Monday, its most since early June.

The largest number of recent cases are in the Waterfront Communities-The Island neighbourhood, which runs south of Queen Street between Bathurst Street and Simcoe Avenue to the lakeshore, and south further east from Front Street.

The area had 84 sporadic cases in the past three weeks, twice as many as any other neighbourhood in the city, according to data on the Toronto Public Health website Monday.

Dr. Eileen de Villa, the city’s medical officer of health, pleaded with the city’s population to be disciplined.

“Life has changed. And all of us have to act like it. But I fear that on some level too many of us are unwilling to make the changes we need to make to keep everyone safe and limit the spread of COVID-19,” de Villa said Monday. “We have not passed a point of no return. I’ve said that before and I will say it again. We can still turn this around.”

Peel reported the second highest number of cases on Monday, 77.

The region is seeing a higher number of cases among households and close contacts rather than in outbreaks, according to Peel Public Health staff.

With school back in session, the health unit said school students have contributed to an increased overall case volume, but there have been no school outbreaks to date, which are defined as two or more cases with an epidemiological link within a 14-day period.

Since the start of September, the region has seen an increased percentage of cases in the 20-to-29-year-old age range.

Ottawa reported 60 new cases Monday. Ottawa’s public health unit said in an email that contact tracing has been incredibly difficult because of the “dozens, if not hundreds of possible sources of transmission in many cases,” and the difficulty people may have remembering their interactions and whereabouts for the past 14 days.

But in cases where they do know the source, transmission is being traced to “private get-togethers, parties, dinners, meetups with colleagues, friends and others, during prolonged, close and unprotected contact.”

“Higher percentages of people with COVID-19 with no known source is concerning as it indicates unidentified spread within the community and/or unwillingness to share contact information with public health,” said an Ottawa Public Health spokesperson.

“It is critical to understand the source of the virus in order to reduce transmission through the identification of the original person with COVID-19, perform contact tracing and isolation measures.”

York Region, which reported 27 new cases Monday, is dealing with 16 active outbreaks, 10 of which are in workplace settings. An outbreak is defined as two or more cases.

Patrick Casey, corporate communications director for York Region, said in an email Monday that “early on in the pandemic when there were fewer places open, these occurred less often. As the province reopens, we are seeing more of these occur, which is to be expected as individuals return to their place of work.”

Casey said that generally, most workplace outbreaks have been in the manufacturing/industrial sector, and that there have been few outbreaks among staff in restaurants.

Where the virus is being transmitted in workplaces, he said, it’s as a result of interaction among the workers outside of their jobs, which includes carpooling to work, attending common social gatherings and living together in close, crowded residences.

The region also has 10 schools with at least one confirmed case of the virus, but Casey said that, to date, none of these confirmed cases acquired the infection directly from school and were exposed outside the school setting.

“York Region is home to over 300 schools and over 200,000 students, so we did expect to see some cases in schools,” said Casey. “We have dedicated resources for these school situations to ensure the impacts of ill children in school settings can be minimized.”

In all four regions, the biggest proportion of cases is now among 20- to 29-year-olds, or 19- to 34-year-olds in the case of York Region.

Furness said the province’s new limits on group sizes for social gatherings — 10 people indoor and 25 outdoor — should help reduce the size of outbreaks.

“Smaller gatherings mean less superspreading events,” he said. “So it’s not going to reduce the number of outbreaks, but the size of them. That is positive, no question.”

He said the new rules are also beneficial for psychological reasons.

“We’re telegraphing for the first time that we need to pull back,” he said. “And that’s an important message about people being lackadaisical. If I can go to a restaurant with 30 people and no one is wearing a mask, why can’t I do that in my living room. We’ve had a lot of pushing the boundaries.”

With files from Ed Tubb

Don't Miss it Rathlin Island: The UK island with no coronavirus cases
Up Next The COVID-19 lockdown is squeezing real estate from all sides and threatens to burst the housing and mortgage bubble