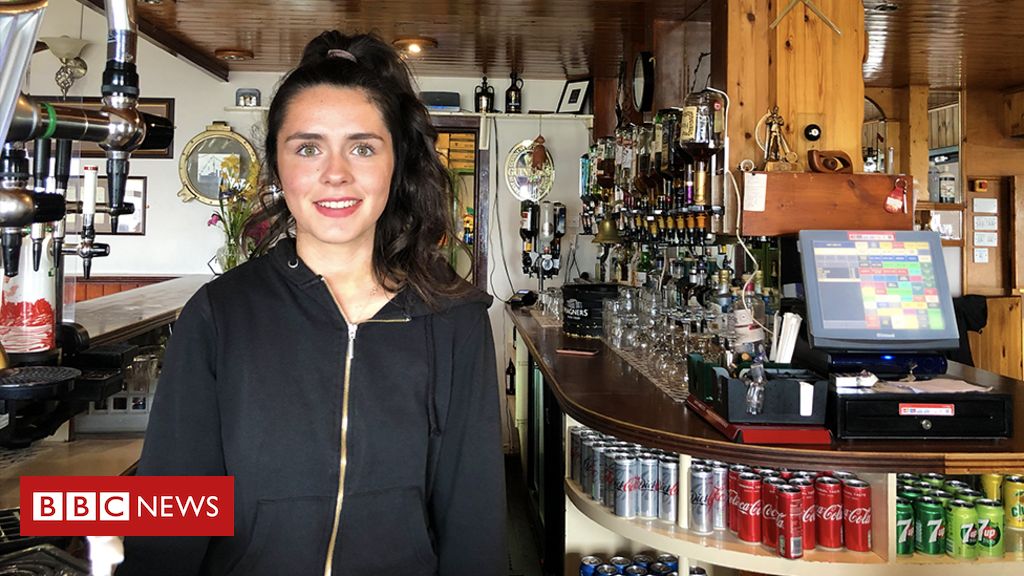 No shopping trips, no nightclubs, no cinema visits. National lockdown felt pretty different for most of us.

But on Rathlin Island, a small L-shaped bit of land off the coast of Northern Ireland, they’re used to it.

Although it hasn’t had any cases of Coronavirus, Rathlin went in to lockdown in March.

She’s one of around 150 people who actually live on Rathlin Island, and she works in its only pub.

“We’ve got a post office and gift shop. Then there’s a wee museum with things divers found in shipwrecks.”

“One hotel, a couple of hostels.

“And loads of people come to see the bird sanctuary.”

Orlagh spent some of lockdown helping her boyfriend to farm sheep

When she was at primary school, there was only one teacher.

But no worries about over-subscribed classes here, at that time just three students were enrolled in the whole school.

“Now, there are seventeen kids in the school”, she tells me incredulously.

“The teacher’s having to manage all of them so that’s quite a lot.”

There’s no secondary school on the island. Instead of getting the ferry twice a day to the nearest one, Orlagh went to boarding school in Belfast.

“I know what the city is like because I went to school there. But I don’t think I’m missing out by living here, it’s just different.”

On the ferry from Ballycastle to Rathlin, you can quickly see why the island is so appealing to visitors.

The unspoiled landscape is a haven for wildlife.

Dolphins diving in the sea, captured from Rathlin’s coast

But the main difference between Rathlin Island and the rest of the UK at the moment is that it hasn’t had any coronavirus cases.

“We locked down back in March.

“At first they reduced the ferry timetable, but then they stopped it completely.”

The ferry is the only way to get to mainland UK from Rathlin, so shutting it off completely was a big decision.

“Food, stuff for the nurse and post was all that could come over.”

The island has one district nurse who stays there, and can be contacted by phone. There’s no hospital or doctors surgery.

It opened back up for visitors in July, with social distancing in place, although not many have come.

Orlagh says some residents weren’t keen on reopening the island.

“Some people are still shielding now, they’re still nervous and they don’t want to mix with anybody.”

Although Rathlin residents have avoided being physically impacted by coronavirus, the island has been hugely affected.

Usually on a sunny day like today, it would be brimming with visitors.

The island is only six miles long, and one mile wide

“We usually have hundreds of tourists over every day.”

Kieran moved to the island four years ago and says since then it’s been “hot and full of tourists”.

“I enjoyed lockdown, it was some peace and quiet for once. I’ve been quite content.”

Kieran lives with his girlfriend and two dogs

Kieran hasn’t been off the island all year. He’s been working as a cleaner at McCuaig’s Bar.

He says: “Covid has taken a chunk of our profits, so we’ll have to see how we are over the winter.

“It would be such a shame if something happened to the bar because – well, it’s our only bar.”

Like most businesses there, McCuaig’s relies on a busy summer to get them through a winter with few visitors.

“This year is a hard hit for everybody,” Orlagh added.

“The bar is only operating outside, and that’s very weather dependent. Nobody wants to sit outside on a rainy day.”

Orlagh says it was important to put the islanders’ health first.

“We only have one district nurse, no hospitals. If she had to stop transmission of the virus it would have been quite a big procedure.

As some businesses on the island roll up their shutters again, some felt the restrictions on distancing and cleaning meant it wouldn’t be worth it this year.

Orlagh says: “We should be able to bounce back from this, but it’s going to take a long time.”