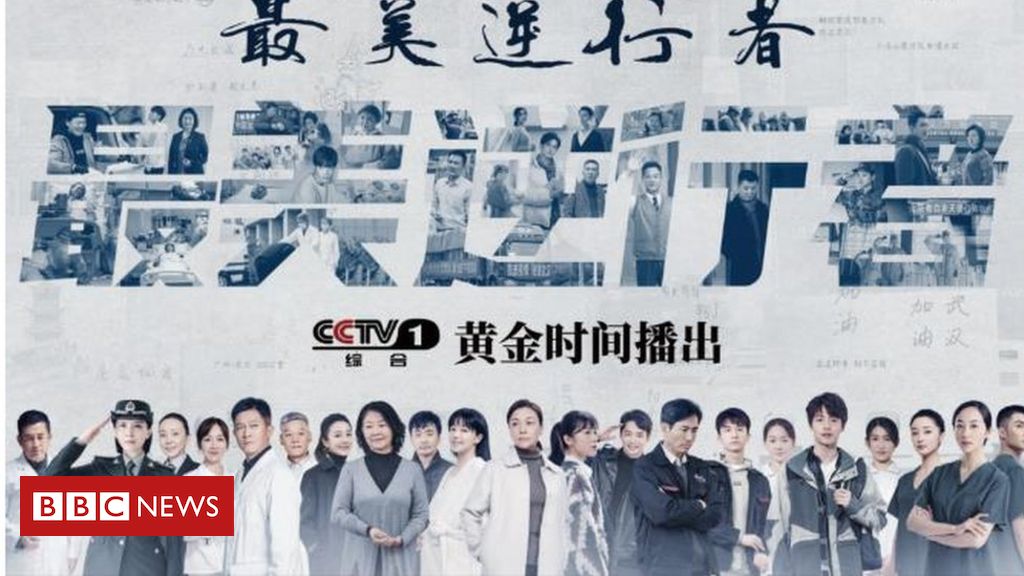 A highly anticipated drama about Covid-19 has come under fierce criticism for downplaying the role of women during China’s epidemic fight.

“Heroes in Harm’s Way” premiered on China’s flagship TV channel, CCTV-1, on 17 September. It aired during primetime, and promised to be the first TV drama “based on real life stories” about front-line workers in the central Chinese city of Wuhan, the site of the first coronavirus outbreak.

The title of the show implied that it was going to highlight the major contributions women had made in China’s epidemic fight. Women account for the majority of China’s front-line workers.

However, the show’s pilot, released with much fanfare and publicity, was panned on China’s IMDB-like website, Douban. Film critics noted that it scored an embarrassing 2.4 out of 10, and it received many critical comments, mainly about its depiction of women, before they were suddenly suspended on the site.

The show has some problematic scenes

The name of the show was seemingly chosen because, as China Daily noted in April, female medical staff are often hailed as “Heroes in Harm’s Way”.

However, in Chinese, the name of the show translates more literally as “Beauties who go against the tide”. It was presumably always going to be quite controversial, given that the phrase insinuates that women in front-line medical roles have taken rare, rather than common paths.

Viewers have taken particular offence to the fact that many of the female characters play a hindering or subservient role compared with their male counterparts.

The national Global Times newspaper notes that in the drama, “one of the most controversial scenes” shows a divorced female driver being discouraged by her peers to sign up to transport supplies to the frontline, because her family are waiting to spend Chinese New Year with her.

Social media users on the popular Sina Weibo microblog felt that this was a derogatory depiction of women, and made women look like they were reluctant contributors “dragging their feet, [who] had to seek the consent of their husbands if they wanted to go to the front line”, rather than the main contributors.

Users asked whether the same considerations would have been written into the plot, had the character been male.

The South China Morning Post also noted that there were frustrations with the depiction of nurses “more interested in gossiping about male doctors”.

But the paper interviews one nurse who says, on the contrary, that “every woman working at her hospital joined the fight against the disease” without question, because only around 5% of nurses working there were male.

Women have played a significant role as front-line workers

Despite the drama’s promise to highlight the role of women, the majority of female characters are shown in junior roles to men, and they largely play an accommodating and submissive role.

The reality is that during China’s outbreak, women not only played a decisive role at key Wuhan hospitals – like former Party Secretary Cai Li, who oversaw operations at the Wuhan Central Hospital, where the virus was first identified – they accounted for a significant majority of staff.

In April – when China was seeing the back of its nationwide outbreak – the official China Daily said that statistics showed “about 50% of doctors fighting on the frontline [were] female”.

It also notes the specific statistics in relation to Wuhan, where there were more than 46,000 cases of Covid-19. Roughly two-thirds of the people who were front-line medical workers in the city were women.

The Global Times newspaper also notes that women played a key role in the construction of the Huoshenshan and Leishenshan hospitals that were built within days in Wuhan at the beginning of the year.

Yet in the show, the construction workers are exclusively male.

China has celebrated some of its female Covid heroes…

The Chinese government has done a lot in recent months to highlight the role of women during its Covid-19 outbreak.

Major General Chen Wei, a top virologist, has been made a “People’s Hero” for her work on the virus, and there have been countless pieces of footage showing and praising female medical workers for their work on the frontline.

However, the drama has suddenly raised questions over the narrative China has been telling throughout the year on its female contributors, and whether women are more broadly being unfairly marginalised.

It is worth noting that Maj-Gen Chen was the only woman out of four people given a national commendation by President Xi Jinping.

The Wuhan Federation of Trade Unions also says that out of the 13 people given “National Model Workers” commendations for their work in the city fighting Covid-19, only four were women.

A lot of China’s media coverage has been selective in highlighting women in caring roles, who have had to sacrifice their roles as good wives and mothers.

On International Women’s Day in March, the official Xinhua focused on how female medical workers were “fighting on the frontline” while “their husbands shoulder the responsibility at home”.

Some Weibo users have quoted the famous Mao Zedong quote: that “women hold up half the sky”, and thousands of comments are to be found, criticising the perception the show has of women playing an “inferior” role.

There are users asking whether the programme’s actors or the director were to blame. But others have the more forceful idea that women are being “washed” out of China’s Covid-19 history with the primetime drama.

But missed others out

It is easy to understand why many Weibo users feel this way; this is not the first time that China has been criticised for retelling or reshaping its Covid-19 history.

And the drama has ignited calls from Weibo users to recognise some of the women that truly made a difference.

Some users name Dr Ai Fen who along with her colleague Li Wenliang, was deemed a “whistleblower” for bringing the seriousness of Covid-19 to their colleagues’ attention.

Both were subsequently given a warning by the Wuhan authorities. Ai Fen has been given no commendation, even though she might have helped raise awareness faster of the virility of the virus.

Netizens have also called for more recognition of Fang Fang for the role she played in helping get the voices of Wuhan heard by the world.

Fang Fang began documenting her experiences of living in Wuhan in January, and soon gained acclaim for her writing on what was happening in the city.

However, as her popularity grew, and she gained international recognition, state media went as far as to brand her a traitor.

Other books instead were instead heavily publicised that told the story of the coronavirus through the eyes of the state, with the overall aim to diminish the mark she made, and instead direct people’s attention towards the Communist Party government’s strength.

One Weibo user says that the drama’s omission of Dr Li Wenliang and Dr Ai Fen meant it was “not worth watching” because the government does “not have the courage to face the full picture of history”.

Don't Miss it Italy in national lockdown as coronavirus spreads | ABC News
Up Next COVID-19 Live Updates: News on coronavirus in Calgary for Sept. 23