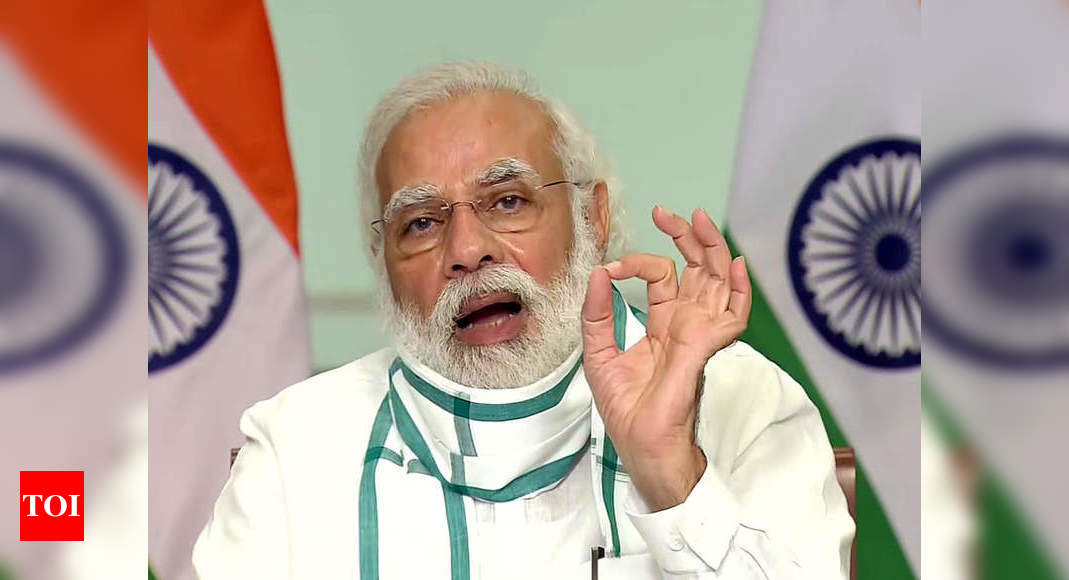 NEW DELHI: PM Narendra Modi on Wednesday indicated his scepticism over “local lockdowns” imposed for a day or two in combating Covid-19 and asked high focus states to assess if such measures are hindering restoration of economic activities while proving to be of little use.
Urging states to weigh the impact and utility of local lockdowns, the PM emphasised the need to focus on “micro containment zones” as a way forward to curb the infection spread and also allow usual activities to go on. With arbitrary local lockdowns in July and August seen to hurt the economy and disrupt supply chains, the Centre had directed states to avoid such measures unless cleared by the home ministry.
In his interaction with chief ministers and health ministers from seven high burden states, Modi strongly highlighted the crucial role of masks in combating Covid-19, saying it may be difficult to make this a habit but positive outcomes cannot be achieved without adopting the protective measure in daily lives.
TimesView

This newspaper has consistently called for full resumption of economic activities at the earliest, while taking all required precautions like wearing masks, maintaining social distancing and ensuring adequate testing. We are glad to observe that the Prime Minister voiced similiar sentiments in his interaction with the CMs of the worst-affected states.

The spurts in infections once the unlock phase began in mid-May led to increased cases and states and local administrations resorted to localised lockdowns. These proved largely ineffective given their limited area and duration which was quite different from the nationwide lockdown that kicked in on the midnight of March 24.
The chief ministers Modi interacted with were of Maharashtra, Andhra Pradesh, Karnataka, Uttar Pradesh, Tamil Nadu, Delhi and Punjab, that account for more than 63% of active cases in the country. These states also account for 65.5% of cumulative cases and 77% of total deaths, a government statement had said earlier.
“There are more than 700 districts in the country but only 60 districts in seven states are a cause of worry. I suggest CMs hold virtual conference with people at district or block level for seven days. We’ve to learn from the best practices from across the states,” the PM said during the meeting.
The PM stressed the need to enhance focus on effective testing, tracing, treatment, surveillance and clear messaging. “Effective messaging is also necessary because most Covid-19 infections are asymptomatic. In such a situation, rumours may rise. It might raise doubts in the minds of the people that testing is bad. Some people also make the mistake of underestimating the severity of infection,” Modi added.