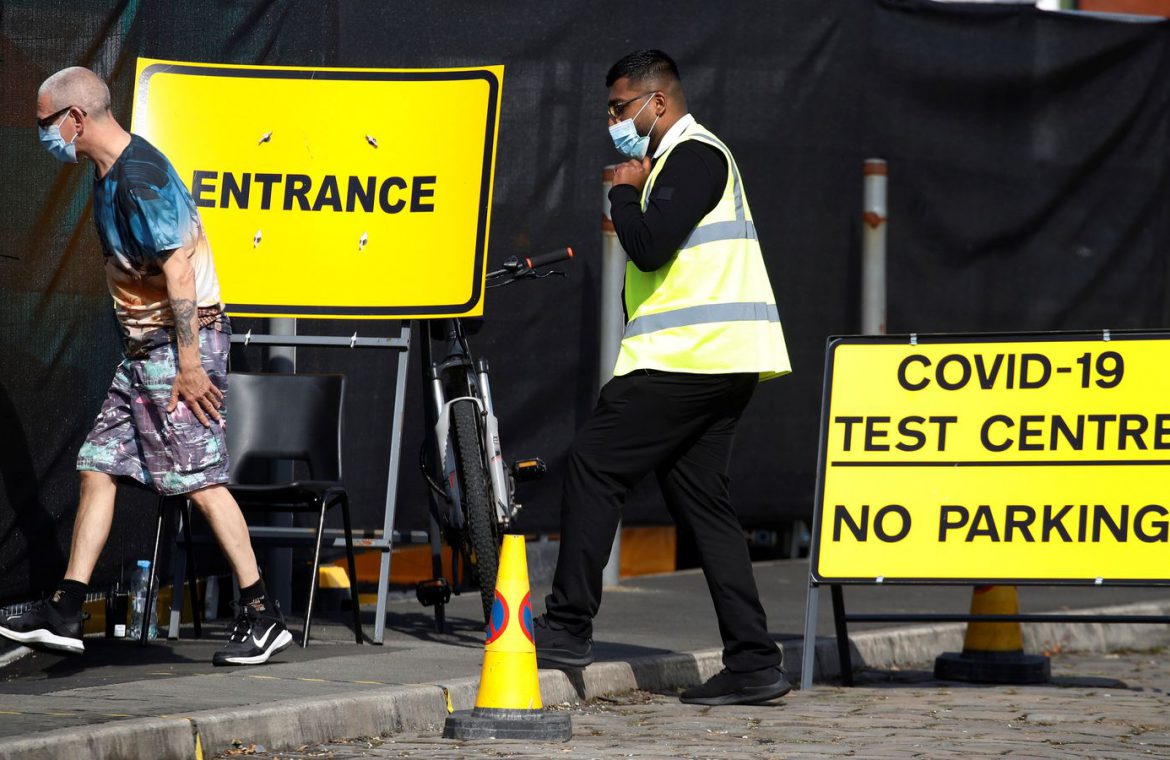 More than 103,000 people in England are estimated to have had coronavirus in the week ending 19 September, according to the Office for National Statistics.

It equates to around one in 500 people testing positive for COVID-19, according to the ONS, up from around one in 900 the week before.

Live updates on coronavirus from UK and around the world

There were around 9,600 cases per day during the week until the 19 September – up from 6,000 a day from the previous week, according to the organisation.

The numbers are for infections recorded in the community and exclude hospitals, care homes and other institutional settings.

The ONS said there was evidence of higher infection rates in England’s North West, Yorkshire and the Humber, London and North East.

It said the West and East Midlands were also showing a small increase.

The survey covers Northern Ireland for the first time, where the ONS estimated around one in 300 people had the virus there in the two weeks up to 19 September.

Scotland isn’t covered by the weekly study, but on Friday the country set a record for new daily cases.

Sturgeon’s appeal to students this weekend

First Minister Nicola Sturgeon said 558 people had tested positive in the past 24 hours, taking the total number since the pandemic began to 26,518.

It comes a day after NHS England launched its contract tracing app, where users have access to postcode district risk level alerts.

The app has revealed that no local area in England is considered a low-risk location, “to reflect the general increase in infection rate across the country,” according to the NHS.

In areas with high risk levels, the local authorities – or a neighbouring local authority – is deploying additional measures to reduce the rate of transmission, such as a local lockdown.

The national list in England most recently only highlighted 44 areas of intervention, with three on enhanced support and 11 marked as being of concern.

More than a million downloads of the app among Android users have been recorded on the Google Play Store, with the Department of Health expected to announce exact download numbers on Android and iOS on Monday.

Friday’s data was revealed after a joint statement from the UK nations confirmed the start of a second wave – and after the coronavirus alert level was raised from 3 to 4.

The statement said: “Cases are rising rapidly and we must take action to stop an exponential increase that could overwhelm our health services and aim to bring R back below 1 while minimising the impact on the economy and society.”

A group representing London’s councils also said the capital was now on the national coronavirus watchlist.

Analysis: ‘We should be careful about jumping to conclusions’

The Office for National Statistics survey is probably the best source of information we have on the state of coronavirus in the UK (or indeed in most countries in the world). It tests around 10,000 households week after week to see how the virus is spreading.

This means its results aren’t affected by rises in the number of tests or difficulties in the testing system. It tells us about infections, not confirmed cases, with about as much certainty as we can expect in very uncertain times.

So when, a month ago, the survey showed a rise in the number of infections in England, it was worth taking seriously. Daily infections jumped from 2,000 to 3,2000. Then, a week later, they jumped to 6,000.

Today we learn that between 13 to 19 September 2020 there were 9,6000 infections every day in England. In other words, according to the best data we have, the trend is clearly upwards.

However, there are two reasons to be careful about jumping to conclusions. First: these are not the actual infections, but an estimate based on modelling, with a sizable range for error. The real number, say the ONS, could be between 7,100 and 12,600. With the data we have available, they just don’t know.

Second: cases are nowhere near where they were at the peak of the pandemic. At that time, only the worst cases were tested and confirmed. Modelling done since then suggests that there were 100,000 cases a day in the UK, with millions in a few weeks, as infections shot up across the country.

How fast are cases rising this time? Here the ONS survey contains a scrap of good news. The total infections show that the doubling time is slower than seven days, so it is not shooting up with the same speed suggested by Chris Whitty and Patrick Vallance in their press conference this week.

Of course the uncertainty is huge, not least because there is a lag on this information, so infections could well be doubling now – alternatively they could yet fail to translate into hospital admissions and deaths, although government scientists say that is inevitable.

We will find out next week. As ever, what matters is not the single data point, but the trend it shows.

Don't Miss it Norman Swan answers your questions about coronavirus | 7.30
Up Next How right-wing extremists, libertarians and evangelicals built Quebec’s movement against COVID-19 restrictions