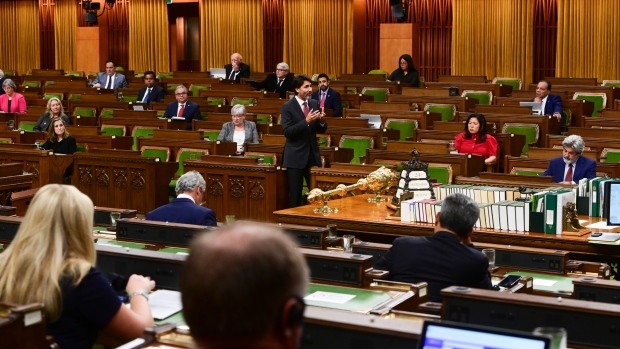 OTTAWA —
The federal government has reached a deal with the NDP to soon pass the Liberals’ recently tabled bill to implement a trio of new COVID-19 benefits to fill gaps left by the soon-to-expire Canadian Emergency Response Benefit program.

After a proposal from the federal Conservatives to hold a special Sunday meeting of MPs was defeated on Friday, Prime Minister Justin Trudeau said he was confident the bill would pass “in the coming days.”

Later Friday, Government House Leader Pablo Rodriguez tweeted that the Liberals had reached a deal “that will deliver the help people need.”

The NDP confirmed that Leader Jagmeet Singh convinced the government to expand the number of people who can access the sick leave benefit that was one of the three new measures within what’s called Bill C-2.

It’s likely this alteration to the legislation would come in an amendment when the bill comes up for debate on Monday.

An enhanced sick leave benefit and an extension of CERB were also the two sticking points the NDP had in guaranteeing their support for the eventual vote on the throne speech. Now, it appears that both of those conditions have been met in altered way, which could mean the New Democrats will prop up the Liberal minority when the throne speech confidence vote happens, avoiding a fall election.

While CERB is not being extended, all who are eligible are being transitioned onto Employment Insurance and an equivalent payment is going to CERB recipients who don’t qualify for EI.

On Thursday Minister of Employment, Workforce Development and Disability Inclusion Carla Qualtrough tabled Bill C-2, to enact a trio of promised new COVID-19 aid benefits. The bill would put into place a portion of the $37 billion CERB transition plan.

The three new benefits are targeted at Canadians who are out of work because they are sick or have to take care of someone, as well as to offer an equitable benefit to gig workers and others who aren’t eligible for EI.

The bill also seeks to extend federal government powers to spend “all money required” to combat the COVID-19 pandemic, until the end of the year.

The legislation needs to pass through the House and Senate and when introducing it, the Liberals urged their colleagues across the aisle to support fast-tracking the bill so the new supports can be in place for Canadians as soon as possible.

The NDP had already indicated an intention to back the bill, though until late Friday they were still negotiating the terms of the sick leave benefit.

Asked about the NDP talks ahead of the deal, Trudeau said that while the NDP want to see paid sick leave become a permanent feature of Canada’s system, it’s “certainly something we can have conversations about, but we are very much focused on making sure that into this fall, as cold season starts again, people have access to sick leave, to be able to stay home and not risk going to work and infect people.”

Despite the tight timeline to pass ithe bill before some Canadians are left without financial assistance, the Conservative’s earlier suggestion to deal with the bill on Sunday required unanimous consent to pass, and not all MPs were on-side with the idea. The Bloc Quebecois directly opposed adding another sitting day.

The Conservatives argued that, given the amount of spending the bill would then prompt, it needs as thorough a study as possible. Specifically, the caucus suggested sitting in a special committee of the whole on Sunday that would have called on Deputy Prime Minister and Minister of Finance Chrystia Freeland, Minister of Public Services and Procurement Anita Anand, the Minister of Families, Children and Social Development Ahmed Hussen, and the Minister of Labour Filomena Tassi to appear and face hours of questioning.

Don't Miss it Coronavirus vaccine update: Highly effective coronavirus antibodies identified, may lead to passive Covid-19 vaccine |
Up Next House Democrats to include more aid for airlines in coronavirus package