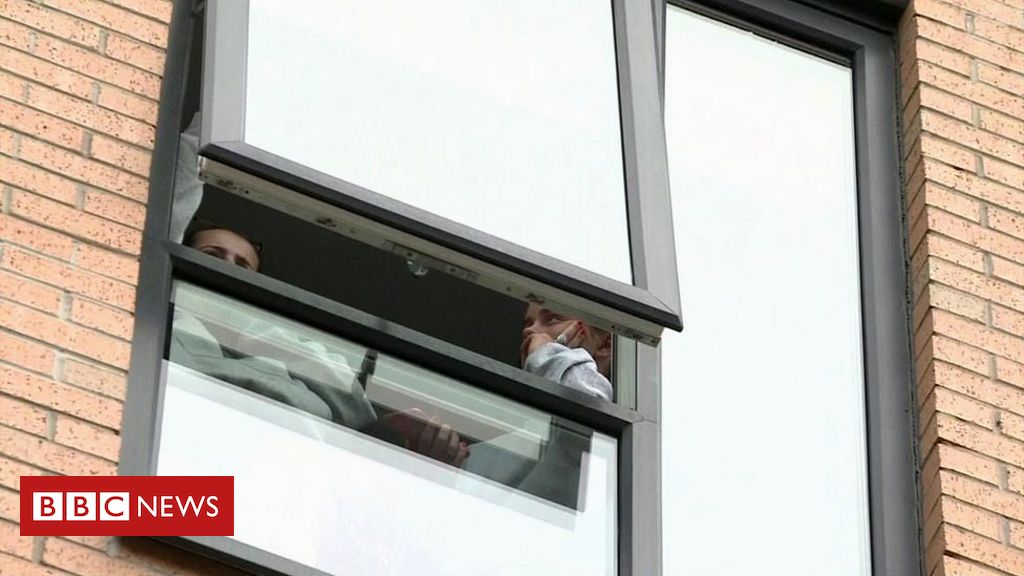 The government should promise university students that they will be allowed to return home for Christmas, Labour has said.

Shadow education secretary Kate Green said it was “unthinkable” that students could continue to be locked in halls and unable to see their families.

Thousands of students are currently in lockdown at universities across the UK after coronavirus outbreaks.

The Department for Education said it was working closely with universities.

Earlier this week, Health Secretary Matt Hancock refused to rule out a ban on students returning home at Christmas, but added: “I don’t want to have a situation like that and I very much hope we can avoid it.”

He was responding to a question about concerns that students were spreading Covid-19, following local outbreaks on campuses.

Tips and tricks for coping at uni in a pandemic

About 3,000 students are currently in lockdown at universities from Dundee to Exeter, the Conservative chairman of the Commons education select committee Robert Halfon has said.

They include up to 1,700 students at Manchester Metropolitan University – where students say they are being prevented from leaving by security guards and police.

Many students have expressed worry and confusion about the situation, with one saying they had “been left completely in the dark”.

In a letter to Education Secretary Gavin Williamson, Labour’s Ms Green accused the government of failing to prepare for the likelihood that the virus could spread among students.

“It is deeply distressing that so many will now not get the university experience they deserve, and face the appalling prospect of being locked in their rooms with no chance to make new friends,” she said.

“Universities have done all they can to prepare for students’ safe return to campus, but the government has failed to play its part.

“You let young people down with the exam fiasco over the summer, and now many of those same students are being let down again. These young people deserve better than your incompetence.”

And regarding Christmas, she added the government must “work with universities to ensure every student has access to testing to allow a safe journey home”.

Earlier this week, government scientific adviser Sir Mark Walport warned that students in virus hotspots might have to be forced to stay on campus over Christmas.

‘Don’t scapegoat students over Covid outbreaks’
Scottish students: ‘Why have they sent us here?’
‘We had no warning’

Manchester Met said it had introduced a 14-day self-isolation period at its accommodation at Birley and Cambridge Halls after 127 students tested positive for the virus.

Joe Byrne, a first-year student there, said: “We have had no warning, support or advice from the university about how we get food etc, and instead have been left completely in the dark and practically locked up against our will.”

Hundreds of students are also isolating at Glasgow University

Another student, Megan Tingey said she was not contacted by the university about the lockdown before police turned up outside her accommodation.

“It was quite scary and confusing,” she said. “No one’s really told us much and then the police turn up as well with security outside.”

Thousands more students in England are turning up for the new university term this weekend – but the big question is whether they should be heading in the opposite direction and studying from home.

Is it wise or fair for universities to bring students back if they’re at increasing risk of being in a Covid outbreak and having to self-isolate?

Accommodation blocks, with shared facilities and filled with young people wanting to socialise, have already seen a wave of outbreaks. So should the brakes be applied to stop this pattern repeating itself?

But after recruiting record numbers of students and promising them a mix of online and face-to-face teaching, it is going to be a very awkward U-turn for universities to switch back to the academic equivalent of working from home.

And would that mean refunds on accommodation and tuition fees?

There are likely to be some chaotic days ahead – and some big decisions to be made about whether to cut numbers on campus. And students must wonder how they’ve gone from being cooped up at home all summer to now being cooped up in university.

In a statement, Manchester Met said it had communicated with students “as soon as we could but it was not possible to give significant advanced notice due to the requirement to implement the isolation almost immediately”.

“The communications we sent included details about how to access food and other provisions and we have been working with other partners, including local supermarkets, throughout the day to provide additional support,” the statement said.

“Our security teams will increase patrols to support the lockdown and we will take disciplinary action against any students found to have breached requirements.”

Hundreds of students are also isolating at Glasgow University because of two coronavirus clusters.

The university said it would offer a four-week rent rebate to all students in university residences in recognition of the “difficult circumstances” under which they were living.

It said those students would also be given £50 each to spend on food and it would invite local mobile food outlets to come to residences.

Across all of Scotland, students have been told not to go to pubs, parties or restaurants over the weekend. Universities Scotland has said students who socialise with anyone outside of their household risk losing their place at university.

A Department for Education spokeswoman said: “The government is working closely with universities to ensure they are well prepared for the return of students, and we have published guidance to help them keep students and staff as safe as possible.

“Students should follow the latest health advice, just like the wider public, which means they should stay at university in the event that they have symptoms, have to isolate, there are additional restrictions imposed locally, or there is an outbreak on campus or in their accommodation.

Don't Miss it To Italy with Love: Postcards from a Covid-America – BBC News
Up Next Some scientists taking ‘DIY inoculations’ instead of waiting for COVID-19 vaccine