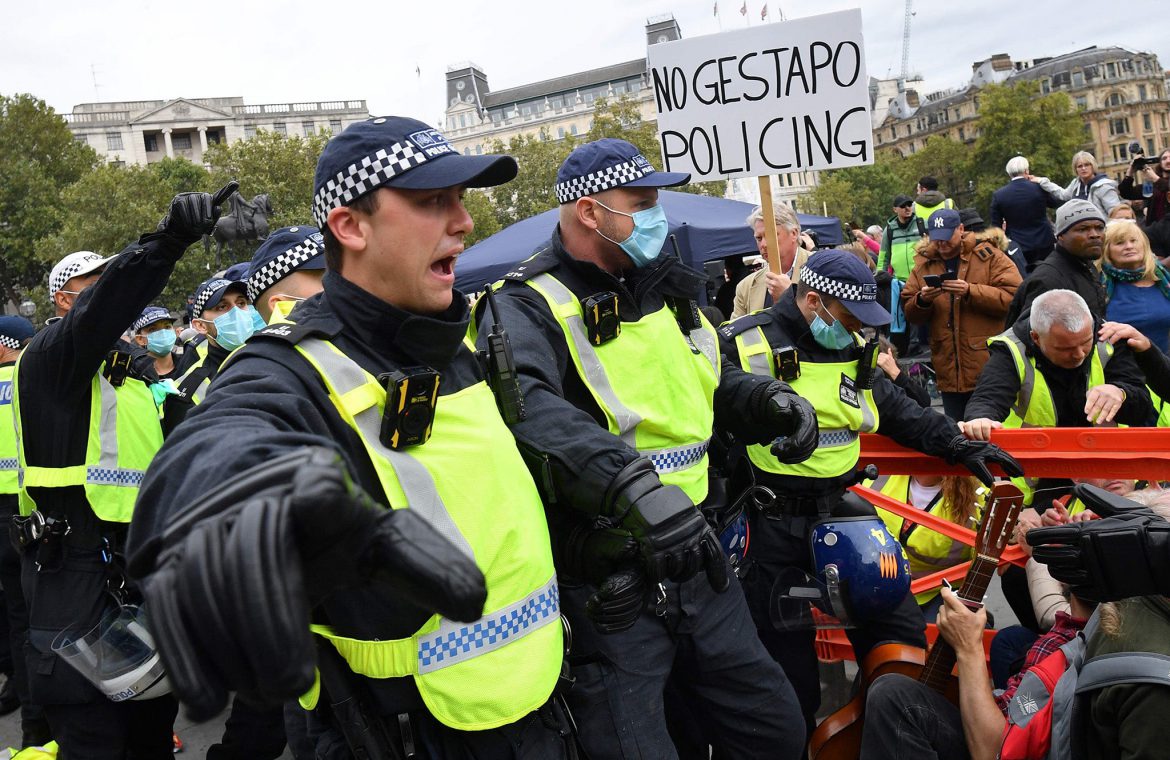 Ministers are under pressure to explain why the new NHS Covid-19 app for England was launched without the ability to process test results from NHS labs.

The flaw left the app unable to process some 60,000 test results – including those carried out in hospitals – until a fix was announced late on Saturday – two days after the launch of the long-awaited tracing system.

Meanwhile, protesters at an anti-lockdown rally in London were involved in violent clashes with police as officers tried to disperse the crowd after warning that social distancing restrictions were not being observed. Sixteen people were arrested and nine police officers were injured.

Students in Scotland may have had their human rights breached by strict new coronavirus restrictions banning them from going home and to the pub, the leader of the Scottish Labour Party has said.

Richard Leonard called for the measures, which were announced by Holyrood this week, to be investigated by the Scottish Human Rights Commission.

A football match in Brazil has been called off after at least 16 players from Serie A club Flamengo as well as the team coach tested positive for Covid-19.

Flamengo, last year’s champions, said it only had nine outfield players and three goalkeepers available for the match with unbeaten team Palmeiras.

The decision, taken by a Rio de Janeiro labour court and reported by Brazilian news sites, followed an appeal by the union of football club employees, who said they and their families would be at risk if the game went ahead.

Both the Brazilian Football Confederation (CBF) and the country’s sports tribunal had rejected Flamengo’s request to halt the game.

The CBF said clubs had the right to register 40 players and so Flamengo should have enough players available. It has not yet responded to the court decision.

Another proposed coronavirus vaccine has reported a strong immune response in test subjects during human trials.

Johnson & Johnson’s vaccine, called Ad26.COV2.S, is the only Phase 3 Covid-19 vaccine trial in the US that is testing a single dose vaccine.

A flaw in the NHS Covid app which prevented users from logging positive test results from NHS labs has been fixed, according to the government.

A spokeswoman for the Department of Health and Social Care said people would be given codes by Test and Trace officials.

“Everyone who receives a positive test result can log their result on the app,” she said.

“A minority of people, such as hospital patients, who were unable to log their positive result can now request a code when contacted by NHS Test and Trace to input on their app.”

Officials had said earlier today they were “urgently” working on a solution after it emerged the app would only accept results from privately-run “Lighthouse” labs.

Sadiq Khan has criticised the “reckless and violent behaviour” of the protesters in central London.

He said: “The reckless and violent behaviour of some protestors has left hard-working police officers injured and put the safety of our city, which is at a critical moment in the fight against this virus, at risk. This is totally unacceptable.

“We cannot let the sacrifices Londoners have made be undermined by the selfish behaviour of a small number.

“Violence of this kind towards officers will not be tolerated and perpetrators will feel the full force of the law.”

Sixteen people were arrested and nine police officers were injured amid violent clashes at anti-lockdown demonstrations in central London.

Thousands of people had massed in Trafalgar Square carrying a variety of signs, flags and placards to take part in a “we do not consent” rally.

When officers tried to shut the event down because crowds were not complying with social-distancing rules, bottles were thrown and police used batons against protesters, leaving some with visible injuries.

The arrests were for a variety of offences including breaching coronavirus regulations, assaulting a police officer, public order offences and violent disorder, according to the Metropolitan Police.

Commander Ade Adelekan said: “As the crowds began to swell in Trafalgar Square, it became impossible for people maintain social distancing and keep each other safe.

“Likewise, there appeared to be no efforts by organisers to engage with crowds and keep those assembling safe from transmitting the virus.

“This lack of action voided the risk assessment submitted by event organisers the night before. This is especially saddening in light of the injuries sustained by officers last weekend.”

“Therefore, today’s demonstration was no longer exempt from the coronavirus regulations. In the interest of public safety, officers then worked quickly to disperse crowds.

“However, I am very frustrated to see that nine officers were injured during clashes with a small minority of protesters. This is especially saddening in light of the injuries sustained by officers last weekend.”

Overall, 14,190 people have died in Florida during the pandemic and a total of 699,000 cases of Covid-19 have been confirmed. There were 2,109 people in hospital with Covid-19 as of Saturday morning.

Florida has had the third-most confirmed COVID-19 cases of any state, behind California and Texas.

A man has been jailed for one year for throwing two large parties that violated coronavirus rules in the US state of Maryland.

Police were called to the home of Shawn Marshall Myers in March and found a party with more than 50 guests in full swing, despite Governor Larry Hogan banning large gatherings.

Students at Manchester Metropolitan University have told how they were left scared, confused and “freaked out” after being told to self-isolate for 14 days.

Students at the Birley campus described how police and security staff arrived before many of them had received any official communication from the university to tell them what was happening.

Dominic Waddell, a first-year filmmaking student, told the Press Association: “A few people got an email to announce they were locking down my accommodation, but not everyone got that so there was a big freak-out with everyone.

“There was a security guard that then just arrived at the gate of our accommodation and he wasn’t letting anybody leave, not really explaining what was going on.

“Lots of people are very angry. People are jokingly saying we’ll rush the gates and stuff. There’s a lot of confusion, frustration, worry that you’re not going to be able to get food – I think that’s the main worry.”

Megan Tingey, a 19-year-old criminology student, said: “It was quite scary and confusing. A police van turned up and there were police outside the gate, quite a lot of them just walking around looking at everyone, especially because we didn’t know what was going on.

“No one’s really told us much and then the police turn up as well with security outside – it’s a really, really difficult situation.”

Italy’s coronavirus Patient No. 1, whose case confirmed one of the world’s deadliest outbreaks was underway, is taking part in a 180-kilometer (112-mile) relay race in memory of Covid-19 victims and as a sign of hope after he himself recovered from weeks in intensive care.

Mattia Maestri was suited up Saturday for the start of the two-day race between Italy’s first two virus hotspots. It began in Codogno, where Maestri tested positive on 21 February, and was ending Sunday in Vo’Euganeo, where Italy’s first official coronavirus death was recorded the same day.

Wearing a black mask, Mr Maestri said the race was a “beautiful initiative” uniting the two hard-hit cities, and that he was thrilled to be even alive to participate. “I feel very lucky,” he said at the starting line.

Mattia Maestri at the start of a 180km relay race in Codogno, Italy, in memory of Covid victims.(AP)