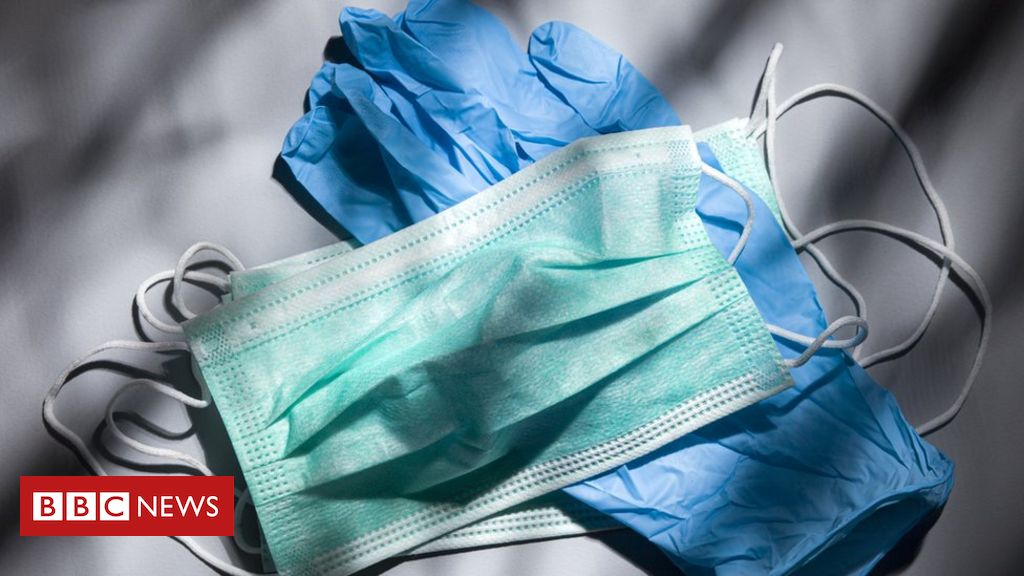 Personal protective equipment (PPE), such as masks and disposable gloves, is being left as litter, says Keep Wales Tidy

Action is needed to limit the use of “unnecessary” single-use plastic during the pandemic, campaigners have said.

During lockdown many chains banned the use of reusable cups for safety reasons, while disposable face masks have been found dropped on beaches.

The Welsh Government said it was working to reduce environmental impact.

In the aftermath of what has been called the Blue Planet effect, companies vowed to cut packaging and the use of disposable cups, with people encouraged to refill and reuse to cut single-use plastic.

The Welsh Government wants to send zero waste to landfills by 2050, with 70% of waste being recycled.

But when the coronavirus pandemic hit, some refill schemes were paused, due to concerns about the spread of the virus, and community groups across Wales reported an increase in litter.

Dr Dunn, head of The Plastic Research Centre of Wales at Bangor University, said while plastic was an important tool in preventing the spread of the virus and saving lives, the pandemic marked a “back step” in the fight against pollution.

Media captionLockdown: Litter and brawling on hottest day of the year

Dr Dunn said, while businesses struggled to keep afloat and people tried to stem the curb of the virus, some sadly had more to worry about than reusing cups.

But he said the rise in litter, especially of single-use plastic such as bottles and single-use masks, would have a lasting impact.

“The hope for all of us involved is that this is a blip, and when things return to some sort of normality, things will settle down,” he said.

Since 14 September, the wearing of face coverings has been mandatory in indoor public spaces across Wales.

The World Health Organisation recommends people use three layer fabric masks in communities, unless they are vulnerable, high risk or in a medical setting.

But disposable surgical masks contain plastic and cannot be recycled, with Welsh Government guidance telling people to put them in their household bin.

But Dr Dunn said while single-use personal protective equipment (PPE) was vital to help curb the spread of Covid-19 in medical environments, most people did not need to use them in their daily lives.

Dr Dunn said the Welsh Government needed to issue a clear public message or introduce a levy to stop throw-away masks being a cheaper for the general public than reusable ones.

“While we need to be very conscious of the health implications, we cannot allow ourselves to be distracted,” he said.

Clare Reed, of the Marine Conservation Society, said a lot of progress was made before the pandemic to reduce single-use plastic, and then it was if it was “all forgotten”.

Ms Reed said she found a discarded face mask on a beach in Rhyl, and the damage on the environment and wildlife was “horrific”.

“I like to see the best in people, they may be falling out of people’s pockets, but if you drop a mask today it will remain in the environment for many, many years,” she said.

Media captionThe masks should be made of cotton, and even an old pair of socks can be used to cover your face
‘Plastic-free community temporarily abandoned’

In June 2019, Broad Haven and Little Haven in Pembrokeshire were named plastic-free communities.

But during the pandemic, volunteers said the amount of single-use plastic they had seen discarded was “heart breaking”.

Sue Christopher said the changes they had made to get rid of plastic sauce sachets, coffee cups and takeaway boxes had “to be temporarily abandoned”, and most could not be recycled or ended up as litter.

At least 2.5 billion coffee cups are thrown away each year in the UK, according to a UK government report published in 2018.

In July, 119 experts from across the globe signed a statement, concluding reusable containers posed no threat to the public during the pandemic.

The statement, organised by Greenpeace, claims there is no reason cups, bottles and jars cannot be used as long as they are thoroughly washed, but retailers should adopt “contact-free” systems for customers’ reusable bags and cups.

While some chains, including Starbucks, are now accepting them with systems for baristas not to touch the cups, many other independent chains are still only using disposable cups.

‘He said it was the stupidest idea he had seen’

The Foodservice Packaging Association (FPA) said while there were strict hygiene rules in place in businesses, there was no guarantee a customer had washed their cup or bottle properly, and they could have been handled by many people.

Executive director Martin Kersh said businesses had spent a fortune on PPE to keep staff and customers safe, and many independents could not afford any more restrictions, expense or alternative systems to allow for reusable cup use.

“We don’t want to take that independent fish and chip shop over the edge, we want them to survive, they’re really struggling to do this,” he said.

Public Health Wales (PHW), in charge of handling the pandemic, was unable to comment on the safety of reusable cups.

The Welsh Government said it had encouraged people to use reusable washable face coverings “wherever possible”, and had promoted the responsible disposal of masks in campaigns.

“There has been an increase in single-use items during the coronavirus pandemic and we are working with businesses to help reduce their environmental impact and to support recycled and re-usable alternatives,” a spokeswoman said.

“We are committed to reducing unnecessary single-use plastic in Wales and we are currently consulting on proposals to ban several commonly littered items”.

Don't Miss it Australia enters into coronavirus pandemic phase | ABC News
Up Next US election 2020: Fact-checking Trump on coronavirus