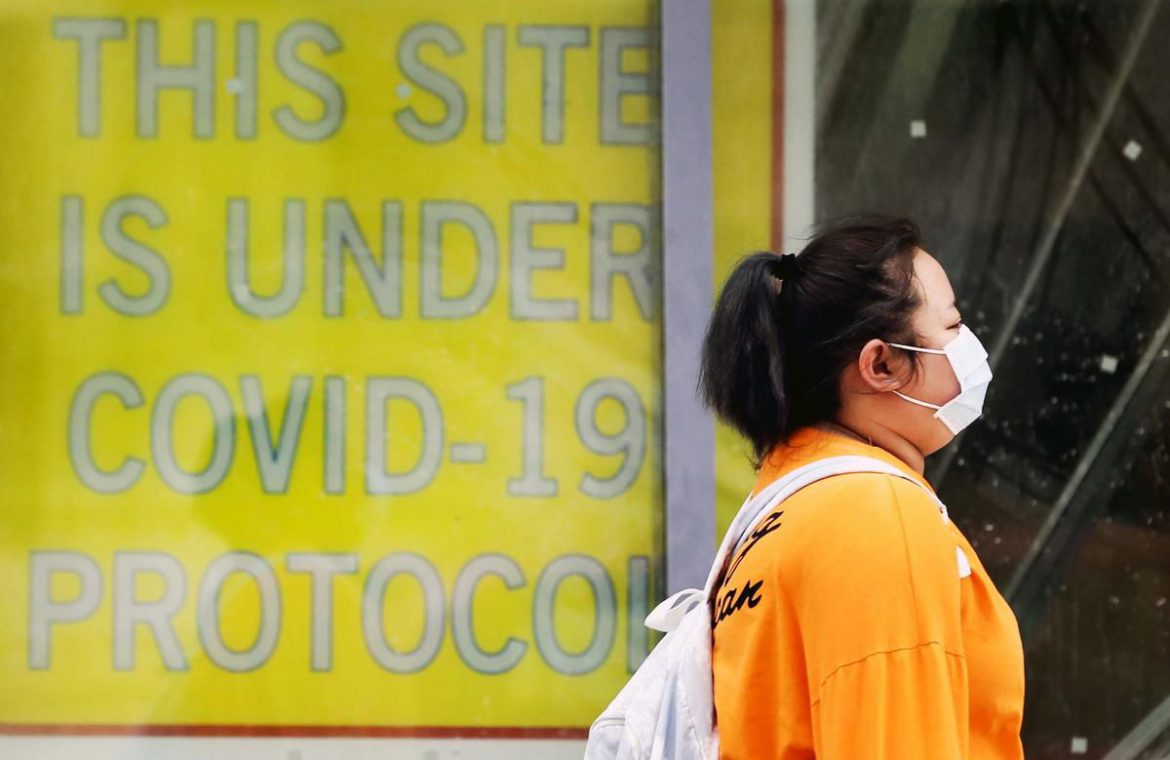 1:34 p.m.: A King St. restaurant, Reyna, revealed Sunday on Instagram that it has temporarily closed after one of its staff tested positive for COVID-19.

“We are saddened to announce that one of our Reyna on King team members has tested positive for COVID-19. This person last worked at Reyna on King on Wednesday, Sept. 24th, 2020 and is currently self-isolating … we decided to immediately close Reyna on King and neighbouring Reyna Bazaar until further notice. While closed, these actions will be take: 1) Reyna on King and Reyna Bazaar” — their Yorkville location — “will be professionally sanitized and deep cleaned to ensure all surfaces are clear of any contamination. 2) The entire Reyna on King and Reyna Bazaar team, as well as anyone from Bar Reyna who came in contact with the infected employee, has self-isolated and is required to get tested for COVID-19 in the next 24hrs. Nobody will be permitted to return to work without proof of negative COVID-19 test results.”

Reyna, on King St. E., is some distance from the three King St. W. restaurants shuttered by Toronto Public Health over the weekend for COVID-19 rule violations. Further down King St. W., an outbreak at Regulars Bar was revealed on Sunday.

1:15 p.m.: Provincial police remain on the scene Sunday in Wasaga Beach where hundreds of modified cars descended this weekend for stunt driving, racing and more.

The town saw a large influx of car enthusiasts starting Friday for what police called an unsanctioned car rally. Late on Saturday, OPP officers set up at the entrances to town and began turning away motorists that were not Wasaga Beach residents.

“There was an overall disregard of any kind of rules at all, so they made the decision in the interest of public safety to shut down the town, for lack of a better word,” said OPP Sgt. Jason Folz.

Folz said there was a lack of physical distancing and complete disregard for the limits on outdoor social gatherings (25 people), which were implemented to help slow the spread of COVID-19.

12:43 p.m.: Provincial police remain on the scene today in Wasaga Beach where hundreds of modified cars descended this weekend for stunt driving, racing and other alleged dangerous driving behaviours.

OPP Sgt. Jason Folz says the “car takeover” began Friday and continued early Sunday. Police temporarily closed most accesses to the town Saturday night to prevent more people from arriving from outside the community of about 20,000 residents.

Folz says some vehicles were seized and tickets were issued under the Highway Traffic Act and the Reopening Ontario Act, which limits outdoor gatherings to 25 people during the COVID-19 pandemic.

12:05 p.m.: Toronto Public Health stated on Sunday that it’s notifying staff and patrons who visited the Regulars Bar on King St. W., between Sept. 13 to 22, about a potential exposure to COVID-19 after three bar employees have tested positive.

TPH says it has followed up with all known close contacts, who have been asked to self-isolate for 14 days and to go for testing. If you were at Regulars, 668 King St. W., at Bathurst, during this time but haven’t been contacted by TPH, you are not identified as a close contact and are viewed as low risk, but as a precaution, TPH asks you to monitor for COVID-19 symptoms for 14 days after their visit.

TPH estimates approximately 600 people may have been at the venue during this time..

Health officials say four additional deaths were also reported: two in the past 24 hours, and two that took place between Sept. 20-25.

Authorities say hospitalizations went down by one in the past 24 hours for a total of 216.

Of those, 41 people are in intensive care — a drop of four from the previous day.

The province has now recorded a total of 71,901 COVID-19 cases and 5,825 total deaths attributed to the coronavirus.

Health Minister Christian Dube says the increase in cases is primarily due to community transmission of the virus, and the province is asking Quebecers to limit their contact with others over the next few weeks.

11:21 a.m.: The Correctional Service of Canada says it is suspending visits to federal prisons in Quebec to prevent the potential spread of COVID-19.

The agency says temporary absences and work releases from institutions and community correctional centres in the province are also suspended. Quebec has seen an increase in COVID-19 cases in recent weeks, reporting 896 new cases on Sunday.

CSC says health services in its Quebec facilities will continue and temporary absences will be allowed on medical and compassionate grounds. For now the restrictions do not apply to facilities in other provinces.

The agency says there are no active cases of COVID-19 among inmates in its 43 institutions across Canada.

10:21 a.m.: Ontario Health Minister Christine Elliott stated on Twitter on Sunday that the province is reporting 491 new cases of COVID-19 after more than 42,500 tests were completed. Locally, there are 137 new cases in Toronto with 131 in Peel, 58 in Ottawa and 58 in York Region.

Two more deaths were recorded on the province’s tracking site, and 289 more recoveries. The net result is that Ontario’s active case total climbed by 200 to 4,196. The most recent numbers from the City of Toronto put the local active-case count at 1,421.

The number of Ontarians hospitalized increased by 12 to 112.

The provincial new-case number — the highest since May 2, during the first wave — compares to 435 new cases reported on Saturday and 409 on Friday. Ontario’s death toll stands at 2,839.

10:13 a.m.: Canadian ski resort operators planning for a season that begins in about two months are being forced to balance profits with protecting the health of their guests in view of the pandemic. Although medical experts agree there’s little chance of infection while flying through the powder on a steep double-black-diamond ski run, they say the risk increases dramatically when riding a packed gondola to the top of the hill or enjoying an apres-ski cocktail in a jammed resort bar.

Resorts say skiers and snowboarders will have to wear masks on lifts and gondolas and when indoors and social distancing will be encouraged by removing tables and chairs in bars and restaurants. They are vowing more frequent cleaning and sanitizing.

Gondola loading is particularly tricky for Sunshine Village ski resort in Banff National Park, where the only way for guests to get from the parking lot to the main ski area is by taking a 17-minute ride in an eight-person gondola car.

“As the gondola is our main lifeline, when it is busy we will be loading it to capacity,” said spokeswoman Kendra Scurfield in an interview. “We tried limiting capacity in the spring prior to being closed for COVID and we found the lineup was more of a hazard. People weren’t social distancing in line, it backed onto to the road, it just became more dangerous than loading people up.”

Meanwhile, at destination resort Whistler Blackcomb, 120 kilometres north of Vancouver, no formal limits have been placed on the number of guests allowed on the hill but the expectation is that numbers — which can reach 35,000 people on busy days — will be 10 to 20 per cent lower, said spokesman Marc Riddell.

8:02 a.m.: CERB payments will begin to wind down starting this weekend. In its place is employment insurance, which the government says the majority of people will go on, and a new suite of benefits that won’t exist unless approved by Parliament.

As of a week ago, the CERB had paid out $79.3 billion to 8.8 million people, or roughly two in every five members of the nearly 20.2 million-strong labour force in August.

Benefits were paid up front, which won’t be the case for those in the first wave of being transferred to the new system: The government says the first payment will come the week of Oct. 11. About 80 per cent are expected to receive payments by Oct. 14; a further 10 per cent within the first two weeks.

The $500-a-week floor on benefits in EI, or $300 per week floor for new parents using the extended-leave option, will be taxable. Jobless benefits through this EI program will be available for at least 26 weeks, and claimants will be allowed to earn more than they did under the CERB, up to $38,000 annually, before being completely cut off.

Employers will also be allowed to use “supplemental unemployment benefits” to top up EI payments.

The threshold to qualify for EI has been reduced to 120 hours of insurable work for those coming back into the system that has been nearly dormant since March.

The government says 2.8 million people will qualify for EI as of Monday. But many may not do so automatically.

7:37 a.m.: A former Lebanese foreign minister and son-in-law of President Michel Aoun has tested positive for the coronavirus, his office said Sunday.

The statement from his office said Gebran Bassil, who also heads the Christian Free Patriotic Movement party, will isolate until he recovers, adding that the infection level is still “low and acceptable.”

The announcement comes amid an alarming surge in coronavirus cases in Lebanon, with record numbers registered almost every day for the past week.

The Health Ministry confirmed Saturday 1,280 new coronavirus cases, bringing the overall number of infections in Lebanon to 33,162. The government has recorded 317 deaths from COVID-19 since the first case was reported in late February.