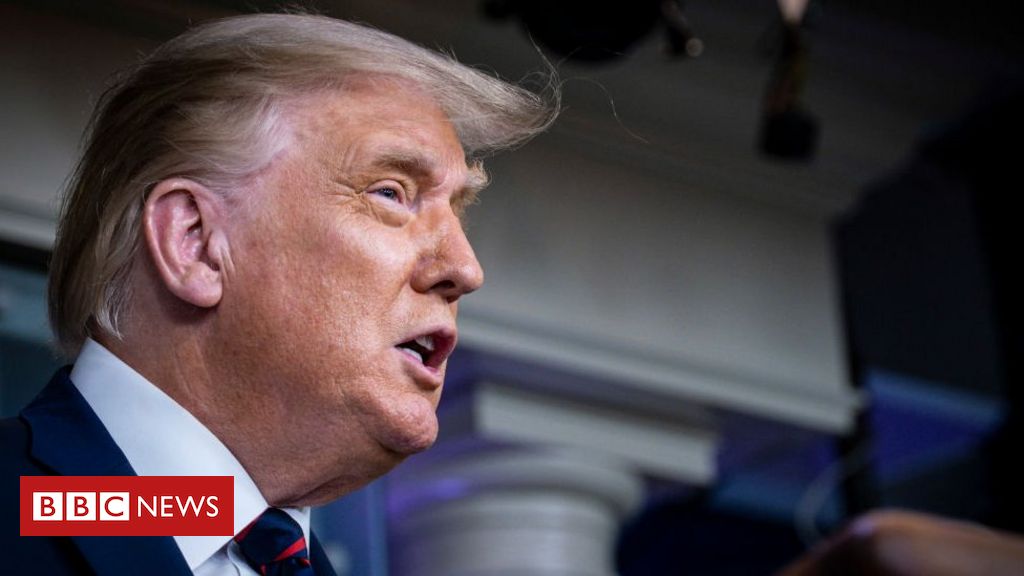 President Donald Trump’s response to the coronavirus pandemic, in which more than 200,000 people in the US have died, has become a key issue in the forthcoming election.

He has been criticised for playing down the virus in the early stages and for the US registering the world’s highest number of Covid-related deaths.

Trump: ‘We have one of the lowest mortality rates‘

The president has compared mortality rates elsewhere with those of the United States, claiming they’re considerably lower.

Comparisons across countries are not straightforward as there are differing approaches to reporting coronavirus data.

The US does have both the highest number of cases and the most overall recorded deaths of any country in the world.

However, when you look at deaths per capita – as a proportion of each country’s population – it is no longer top of the list, although it does remain in the top 10 worst-hit countries.

Is the US the worst-hit country for deaths?

10 countries with most coronavirus deaths per capita

Mr Trump has also recently pointed to the rising number of new infections across Europe, saying: “Frankly, their numbers are at a level that are much worse than the numbers here.”

Where are the global hotspots?

It’s certainly the case that some countries in Europe are experiencing a surge in new cases, but that is also true in some parts of the US.

At a rally in June, President Trump told the crowd: “I said to my people, slow the testing down, please.”

But he has since called his comments “semi-tongue in cheek”.

Dr Anthony Fauci, the White House’s top infectious-diseases expert, said: “To my knowledge, none of us have ever been told to slow down on testing.”

However, the president has called testing “a double-edged sword” and says increased testing can give an exaggerated impression of the rise in cases.

Media captionTrump: “If it’s not good, I’ll tell you right, I’m not going to get hurt by it”

Trump: ‘I’m taking [hydroxychloroquine] and I’m still here… what have you got to lose?‘

In May, Mr Trump announced he was taking anti-malaria drug hydroxychloroquine as a preventive measure against Covid-19.

But there is no evidence the drug can fight the virus.

The president has consistently advocated the use of the drug, against the advice of Dr Fauci, who said: “We know that every single good study – and by good study I mean randomised control study in which the data are firm and believable – has shown that hydroxychloroquine is not effective in the treatment of Covid-19.”

The US Food and Drug Administration (FDA) has advised against using the drug to treat coronavirus patients, following reports of “serious heart rhythm problems” and other health issues.

The World Health Organization (WHO) says “there is currently no proof” that it is effective as a treatment or prevents Covid-19.

The Centers for Disease Control and Prevention (CDC), the government agency responsible for public health in the US, has had disagreements with the president during the pandemic over lockdown guidelines and other measures.

Democratic presidential candidate Joe Biden made this comment on Twitter in July without providing context or evidence.

At the time US lawmakers were negotiating a major coronavirus relief package, and there were reports in US media that the Trump administration had been lobbying to reduce funding for the CDC.

However, the White House has denied blocking funding, saying: “The claim from Biden’s team is false. In our latest budget, the CDC saw an increase of $635m (£500m), an 8% increase.”

This is true, and the CDC has received more money during the pandemic response.

The Trump administration’s budget proposal for the 2021 fiscal year, starting in October 2020, did initially propose cuts to the CDC – but it is now set to increase funding, including for infectious-disease activities.

Trump: ‘We surged rapid testing kits to every nursing home in America’

Testing in care homes is important, as older people are more likely to be vulnerable to coronavirus.

In the early stages of the pandemic there were high numbers of deaths in care homes in the US, as in many other countries.

Millions of coronavirus tests have been sent to US care homes, according to the White House

The White House has said Mr Trump’s statement was accurate and that 4.9 million rapid point-of-care tests had been delivered to nearly 14,000 certified nursing homes.

How bad is the crisis in US care homes?

According to CDC figures, there are 15,600 care homes, with 1.3 million residents.

“Testing of nursing-home residents and staff has been challenging, as it has for other sectors of healthcare,” says Prof Debra Bakerjian, at the Betty Irene Moore School of Nursing in California.

“The effort to provide testing to nursing homes is moving forward, but not without bumps in the road,” she says.

Trump: ‘If you take the blue states out… we’re really at a very low level’

“If you take the blue states out, we’re at a level that I don’t think anybody in the world would be at,” Mr Trump said recently. “We’re really at a very low level.”

“Take New York and some of these other Democrat-run states out of it, you’ll see numbers that are unbelievable.”

Out of the five states that have the largest numbers of coronavirus deaths two are Republican-run “red states” – Texas and Florida.

It’s true that in the early stage of the outbreak Democratic-run states such as New York and New Jersey were worst-hit.

But as the pandemic has progressed, Republican-led states have yielded a greater proportion of fatalities.

The Washington Post has recently calculated that around 53% of deaths have occurred in “blue” states and 47% in “red” ones.