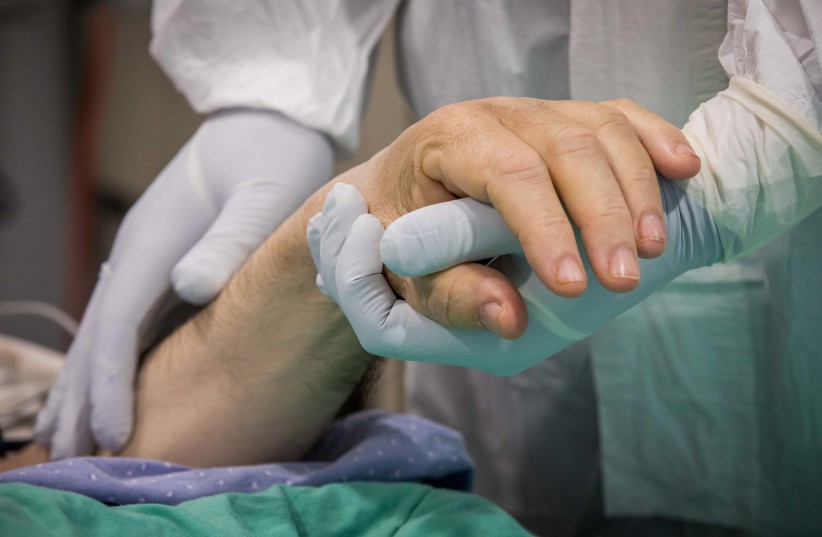 “On Rosh Hashanah it is inscribed, and on Yom Kippur it is sealed.”These are the words that millions of Jews around the world and in Israel will read on the Day of Atonement that starts Sunday night. The 13th-century prayer is meant to raise fear in the worshiper. In 5781 it is even more relevant than in most recent years, as its words can be read as a direct commentary on the COVID-19 pandemic.A few excerpts from Unetaneh Tokef:Who shall live and who shall die?

In the last two days, more than 16,000 people have been diagnosed with the novel coronavirus, the Health Ministry reported.Statistically, half-a-percent of these people will die. That means that some 40 have been handed a death sentence and more will be handed similar fatal decrees until the pandemic ends or an accessible vaccine is found.The coronavirus was not caused by humans. However, humans have the power to prevent its spread.This year, masks and social distancing are the difference between life and death. cnxps.cmd.push(function () { cnxps({ playerId: ’36af7c51-0caf-4741-9824-2c941fc6c17b’ }).render(‘4c4d856e0e6f4e3d808bbc1715e132f6’); });Who by famine and who by thirst? Who shall become rich and who shall be impoverished?

The coronavirus has left around a million Israelis out of work. Another 200,000 to 300,000 are expected to be left unemployed by the conclusion of this second lockdown.Israel’s unemployment rate went from 4% to around 25% in just eight months.These are families who were contributing to society and through no fault of their own were left without enough food to eat.Recently, Leket released a video of a woman who sang for the Israeli opera for the last 20 years. When the Health Ministry announced it was unsafe to hold events, she was sent home. Since then, she has not received her salary.In the video, Natali Digora, 48, said that eventually her food ran out: “I went a few days without eating anything at all.”Who shall have rest and who shall wander? Who shall be at peace and who shall be pursued?The coronavirus crisis has led to a shadow pandemic – a mental health pandemic of depression, substance abuse, post-traumatic stress and even suicide.Earlier this month, the Health Ministry told the Knesset that there has been an increase in suicide since the start of coronavirus: This year between January and September, some 207 deceased were brought to the Institute of Forensic Medicine on suspicion of suicide, versus 191 in 2019 and 196 in 2018.ERAN, Israel’s emotional first aid service, has reported a sharp increase in call volume.“Mental health and psychological issues will have much harder and much longer-term effects than the disease,” said Irina Nevzlin, author of The Impact of Identity: The Power of Knowing Who You Are in a previous interview. “Pandemics pass eventually, but the aftershock and the post-trauma can be quite dramatic.”Who shall be exalted and who shall be brought low?

Prime Minister Benjamin Netanyahu was voted back into office and joined by Alternate Prime Minister Benny Gantz on the public assumption that they would protect Israel from the pandemic. Since May, Israel’s leaders have let populism and special interests, as well as their own personal concerns, divert them from the task at hand.On Saturday, tens of thousands of Israelis expressed their frustration. Health Minister Yuli Edelstein and Health Ministry director-general Chezy Levy are likely correct that people get sick at protests. A report published last month in the Journal of Public Health showed a spike in coronavirus cases in at least eight US cities following the George Floyd protests.But the question should not be one of if people are allowed to protest. The question should be why the people feel they need to protest.If the public trusted in the regulations, then they would not gather, for they would believe the authorities that demonstrations could infect and kill. And, if the public felt that its leaders were working on their behalf they would not be out there protesting.This is also true of the religious sector, who wants to pray with their communities on the High Holy Days – it is deeply and spiritually important. But like on Passover, they would stay home, if they had leadership that set an example.The liturgy states that “repentance, prayer and righteousness avert the severe decree.”It was on December 31 that the government in China confirmed that the novel coronavirus had entered the planet. Since then, the virus has plagued the entire world.Who by earthquake and who by plague?

The Day of Atonement is between God and man. An earthquake is a disaster that God forces on the people and the planet and it cannot be stopped by any of man’s efforts.The novel coronavirus is also an illness that was not produced by man. However, people have the power to mitigate its impact.This Yom Kippur is unlike any in decades. Israelis should stand by themselves in prayer this year but pray for solidarity between themselves and their leaders.The book is still open. How will the people seal their own fate?
Loading…