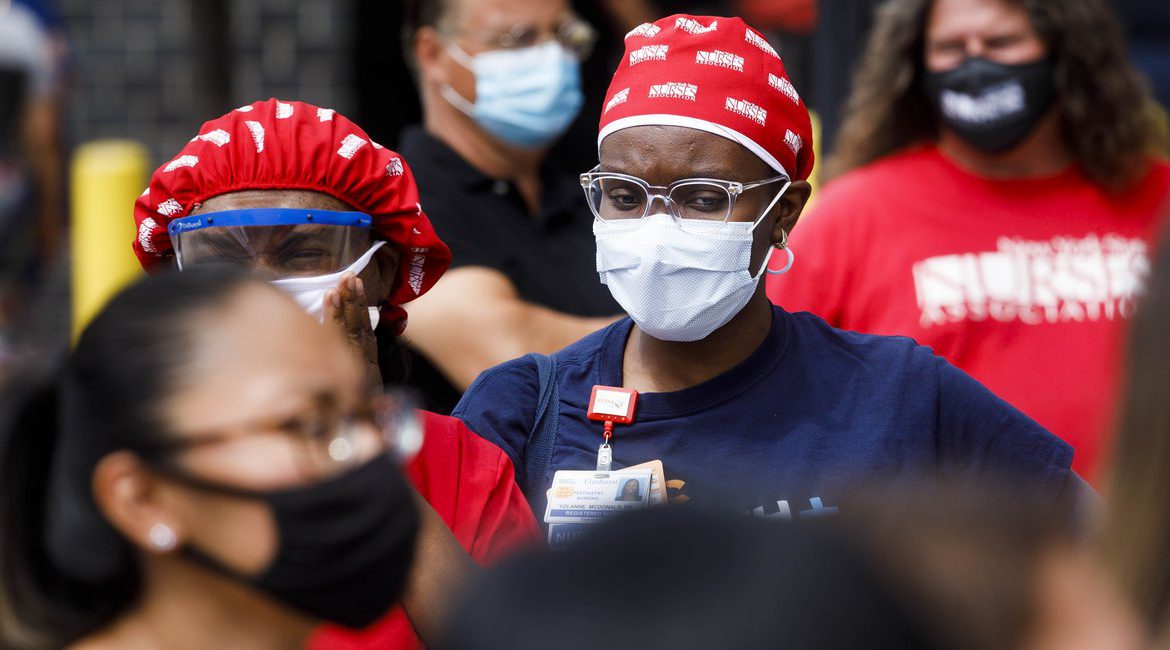 At the height of the COVID-19 pandemic, Black and Latino New Yorkers died from the virus at rates much higher than their representation in the general population. Experts at first theorized that members of these groups worked jobs that put them at greater risk, or that they were more likely to have pervasive chronic illnesses, such as hypertension, diabetes, and kidney disease.

Now researchers and community leaders are assessing another, more nebulous, cause of the disparate death rates: how long it took people to come to the hospital.

“There are a lot of reasons, but one that has been under-studied is access to care,” said Dr. Max O’Donnell, a critical care physician at the Columbia University Medical Center and one of the co-authors of a study in The Lancet on the link between the race or ethnicity of COVID-19 patients and the time it took them to receive care. “How people have access to primary care doctors or have health insurance or mistrust the medical system are all part of the puzzle.”

O’Donnell and his team found a striking variation by race how long it took the sickest New Yorkers to be admitted to hospitals: for white patients, the median delay was three days of symptoms; for Latinos and Hispanics, it was five days; and for African Americans, it was seven days—or more than twice as long as whites.

O’Donnell said other research has concluded that patients who delay care have worse outcomes, though it will take further research to determine how much worse. In the meantime, he said, although “we don’t have the body of literature to make certain claims … [that] can’t prevent us from trying to deliver better care … and improve access.”

Still, there’s no question that delaying care has contributed to the death of many people infected by COVID-19.

For Dr. Tsion Firew, one image stands out from the fog of trauma that pervaded the emergency room at Columbia University Irving Medical Center in upper Manhattan this past spring: one of her colleagues up on a stretcher, trying to resuscitate an elderly Latino man with COVID-19, who had collapsed inside a taxi on the way to the hospital.

“He had seen a doctor via telemed and was told to wait to come in, and he kept getting worse, and finally his family didn’t even wait for an ambulance. They just got him into a cab and brought him here,” Firew recounted.

The CPR didn’t work. Firew found it especially haunting to tell family members that their father and grandfather had died.

“I kept thinking, ‘If they had just brought him in one day earlier, one hour earlier,’” she told Gothamist/WNYC.

Over at The Mount Sinai Hospital in East Harlem, Dr. Carol Horowitz wasn’t surprised to hear that data had captured stark differences in waiting times to seek care. The pattern was familiar to her, both personally and through her work as director of the hospital’s newly launched Institute for Health Equity Research.

Horowitz said the first thing the Lancet study brought to mind was her friend Pepper, a retired jazz singer, who wouldn’t let Horowitz call 911 back in April when Pepper couldn’t even get out of bed and could barely breathe.

“Over the phone, she told me she looked like a mess, her hair was a mess,” Horowitz recalled. “It was the weekend. Her home care people weren’t there, so she had no one to put her wig on, and no one to help her make her bed, and she wouldn’t let me do anything—and she waited to get health care.”

Horowitz tried to be respectful of her friend’s standards (and is not sharing Pepper’s full name, out of respect for her privacy)—and as a physician who has studied health disparities, she understood the underlying mindset.

“She’s an older Black woman. She didn’t have great health insurance. And for her, whether or not your hair looks good or your apartment looks good might be the difference between how you’re treated by health care workers,” Horowitz said. “So for her, it took a really long time to overcome that feeling of ‘I am going to be mistreated because of how I look and because of who I am.’”

Horowitz eventually prevailed. She called 911. But by the time emergency workers got to Pepper’s home, she had passed out, and they had to knock down the door. They brought Pepper to a local hospital, where she was put on a ventilator—but died 10 days later.

While it’s hard to say just how many people died from delaying care, one consequence of coming to the hospital as soon as possible is clear, co-author O’Donnell said: the limited assortment of treatments that doctors now have works a lot better when administered early in the course of illness.

That includes the antiviral drug Remdesevir; steroids that counter inflammation, such as dexamethasone; and antibody-rich convalescent plasma donated by COVID-19 survivors (“potentially,” O’Donnell added, because the data on plasma’s effectiveness are still hazy).

“If you look at any of the therapeutics we’re rolling out, they all work early”—if they work at all, O’Donnell said. “There are a lot of patients spending a lot of time out of hospital and then coming in essentially moribund, and that’s very sad.”

Local organizations and social, religious, and cultural leaders are the key to “bridging the gap of mistrust” between people of color and the health care establishment, according to Dr. Olubenga Ogidegbe, an internist at NYU Langone Health. Ogidegbe, who also studies health disparities, said that going to barbershops, churches, and senior centers is the best way to target those who need the most help, and, in the process, prepare them to seek care more quickly when needed.

“The real issue is not when people make it in or where they go, it’s what are the factors they face in their lives pre-hospital?” he said.

The Arthur Ashe Institute for Urban Health, which has long worked with hospitals and local groups to improve chronic health conditions, has been focusing on the impact of COVID-19 on people of color and trying to help them brace for a possible second wave. Dr. Tenya Blackwell, the Institute’s director of community engagement and research, said that preparation means online workshops and town halls where facilitators train community members “to be their own health advocate.”

It also means telling the hospitals to get their message straight.

“Folks are really confused, because the message has been, ‘Stay home, self-quarantine, and monitor your symptoms,’” Blackwell said, “and now they want to switch the message to say, ‘Don’t delay. Go for care.’”

If, in fact, “hospitals are set up and ready for people to come in without delay and receive care,” she said, “that would be ideal.”

But she said in addition to stockpiling steroids, plasma and personal protective gear, the healthcare system also needs to build up trust and respect from its most vulnerable patients, so they can feel safe seeking help.