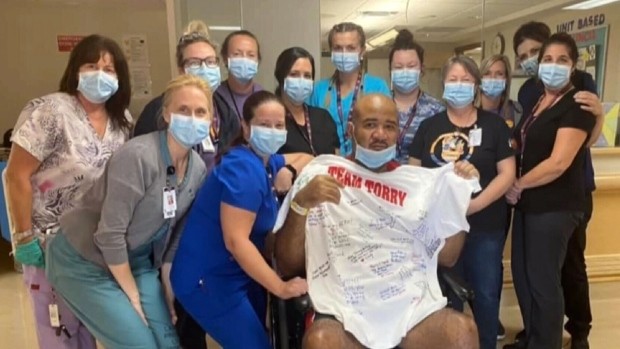 TORONTO —
Torry Robertson spent 173 days in the hospital — 49 of them in intensive care — battling COVID-19. Today, he is living evidence that doctors are getting better at treating patients with the novel coronavirus.

There is no question COVID-19 continues to be a deadly disease. With younger people making up an increasing portion of the cases and high-risk environments like long-term care homes doing a better job at preventing and containing the spread of the disease, however, fewer patients are dying.

But just as important are advances in medical care and treatment for COVID-19. Growing experience by medical doctors over the last half year has improved the chances of survival for those hit with the infection.

Since the start of the pandemic, the death rate for ICU patients has dropped from an average of 60 per cent in early march to 42 per cent by the end of May, according to one study published in July that reviewed more than 10,000 cases from two dozen studies around the world. And some Canadian hospitals are reporting an ICU death rate of about 28 per cent.

The question debated among health-care providers trying to treat COVID in the spring was, “Should we stick to the game plan, or should we abandon the game plan?” said Dr. David Janz, the lead author of a new U.S. study that found critically ill COVID-19 patients in ICU had a better chance of surviving and needed less time on a ventilator when doctors followed an established checklist of ICU practices.

“In our study, we saw that sticking to the game plan and sticking to evidence-based practices in the ICU was associated with a survival benefit (of 15 per cent),” according to Janz, who specializes in pulmonary and critical care at University Medical Center New Orleans.

What made the results especially notable was the very high rate of comorbidities — obesity, hypertension, high cholesterol, etc. — among the patients in the study, said Janz.

To date, those with comorbidities were considered at a higher risk of dying, but the study showed how better treatment protocols can mitigate these risks. Janz and his colleagues found the survival rate in patients treated with evidenced-based practices was almost the same as those in past ICU studies that examined disease processes.

“We know how to do this. We’ve been doing this for decades. You don’t have to reinvent something new, you can keep practicing the things you’ve learned, the things that we know work for patients and it will work for COVID also.”

These findings are similar to what doctors at Toronto’s University Health Network are reporting as well.

“It’s really a question of going back to basics and applying what we already knew. And now that we have some experience with these particular patients, we’re even more ready to do that,” said Dr. Niall Ferguson, an ICU physician with Toronto General Hospital.

“There was a lot of hype and incredible reporting in the mainstream media about how one should be managing these patients anecdotally in the first wave. We are recognizing that actually COVID causes a syndrome called acute respiratory distress syndrome that behaves, in many cases, much like the typical type of acute respiratory distress syndrome that might be caused by other causes of viral pneumonia or sepsis, or shock.”

With worries of a second wave amid a new surge in cases, the UHN is once again seeing COVID-19 cases requiring intensive care. But this time, doctors have more practice and confidence dealing with the most critically ill patients.

“In the ICU we are more comfortable,” Ferguson said, adding that ICUs have become a hotspot for developing and testing new therapies, which has helped speed up the learning process as well.

“I think there’s always a little bit of uncertainty when you’re dealing with a new disease that nobody has really seen before. So we’ve had that first wave under our belts.”

According to Dr. Marcelo Cypel, a thoracic surgeon with the UHN, there is a small but growing list of therapies shown to boost the survival rate of COVID-19 patients. These include: steroids, which have shown to decrease mortality by some 20 percent; more use of blood thinners, which are used to help prevent deadly clots; different breathing therapies that help patients maintain a more optimal level of oxygen; and, delaying or preventing the use of ventilators, which in itself carries greater risks. Even the positioning of patients has been helpful, as well as the use of extracorporeal membrane oxygenation (ECMO) in the most severe cases.

Ferguson noted that this past spring, the 400-plus cases a day that was being reported included a lot of hospitalizations. That has not been the case with the most recent surge in infections, though there is some concern there could be a lag between young, healthy adults getting sick in early September and passing the virus onto older relatives who may get sick weeks from now.

“We’re all recognizing that we may just be in the beginning of a second wave here, in Ontario. And we’ve seen lots of COVID cases in the community,” said Ferguson, who has noticed a small rise in ICU admissions in the region over the last couple of weeks.

“It’s so important to let everyone know that even if the overall mortality rates may be decreasing a little bit, people are still getting really sick. And young, otherwise well people are still dying from this disease.”

“When you get to an ICU your chances of dying … are still pretty high,” said Cypel. “We still need to emphasize prevention as the main aspect here. Social distancing and mask use and washing hands and so on.”

Don't Miss it Covid-19: Up to £10,000 fine for failure to self-isolate in England
Up Next The WA tourist town of Kalbarri is booming but has run out of worker accommodation | ABC News