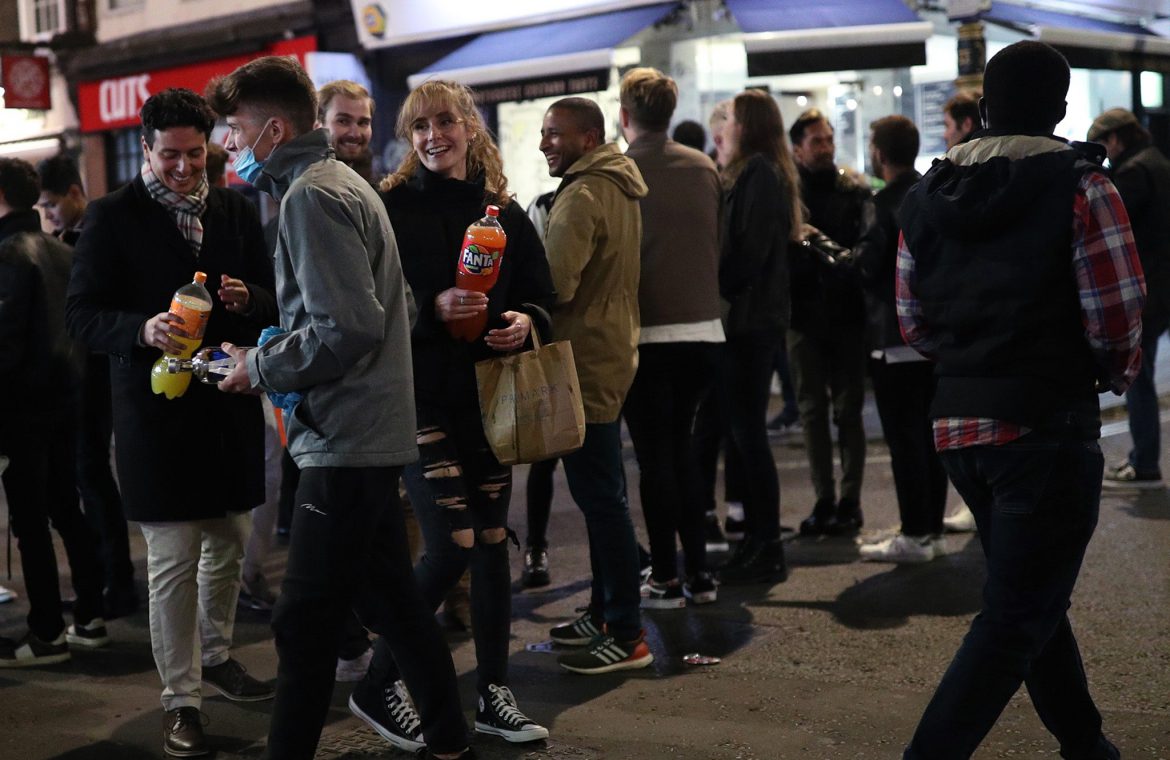 As thousands of students were placed under lockdown in university accommodation, Labour has called for the new term to be delayed to allow for improvements in testing capacity and remote learning provisions.

In addition to students, some of whom are being actively prevented from leaving their buildings, one quarter of the UK population are now under local restrictions, after Swansea and Cardiff tightened measures.

Meanwhile, a Tory MP has said Boris Johnson faces “certain” defeat in a vote over how coronavirus rules are imposed if Opposition parties join with Tory rebels. Labour, the SNP and the Lib Dems are expected to back up to 50 Conservatives in a showdown vote that would give the Commons prior approval of new measures.

Pressure is mounting on Boris Johnson’s government to review the new 10pm curfew imposed pubs, bars and restaurants after drinkers crowded streets across the country at closing time.

Ministers have been urged to change course on the “shambolic” and “ill-thought-out” restriction brought in on Thursday in response to surging coronavirus infections.

Rise in deaths ‘likely’ as cases rise in Liverpool

Liverpool’s director of public health has warned the city is “now in a very difficult position” as coronavirus cases continue to rise.

Matt Ashton tweeted that the rate of new cases, as of the week ending 24 September, was now at 252 per 100,000 people – more than ten times the level at which the government considers imposing local restrictions.

He added that “increases in deaths are likely to follow” due to the spread of the virus to people aged 65 and over and increases in hospital admissions in the area.

Shadow education secretary Kate Green has written to her opposite number Gavin Williamson, urging him to consider a delay to the start of term or a “pause in migration” for universities where term has not yet begun to allow improvements in testing capacity and remote learning provisions.

She said it would be “deeply unfair to see students forced to remain in their student accommodation” and asked Mr Williamson to ensure students were given the right tools to study remotely, if they wish.

“Leaving home to go to university should be a momentous and exciting step for young people and their families. Universities have done all they can to prepare for students’ safe return, but the government has again let young people down,” she wrote.

Students in Scotland can return home from university accommodation on a long-term basis as long as they follow rules on self-isolating, according to updated Holyrood guidance.

Students have been asked to follow self-isolating rules and not use public transport if they decide to permanently return to another home, while still saying it is an “offence” to undertake short stays without a “reasonable” excuse.

“We would encourage students to remain living in their current accommodation where they are able to, so they can continue to benefit from both a blend of digital and in-person learning, where that is possible and the opportunity to engage with others, within the restrictions, to build new networks and to make new friends,” higher education minister Richard Lochhead said.

“However, we know that many students may be struggling with the prospect of not being able to return home to visit family and other support networks, especially if is the first time in their life they have been away from home.

“Knowing what to consider in deciding whether to return home will help support wellbeing and enable students to make informed choices, but it is important to stress that adjusting to life away from home is always challenging.”

Millions of Romanians have gone to polls in local elections amid fears the coronavirus pandemic could sink turnout to unprecedented lows, Cristian Gherasim reports.

President Klaus Iohannis had sought to reassure the country’s 19 million eligible voters that safety measures in place meant casting their ballot “is no more dangerous than going shopping”.

Some 43,000 seats are up for grabs in municipalities, local and county councils.

According to Romania’s Permanent Electoral Authority, the public body charged with overseeing the voting process, turnout for the previous local elections in 2016 stood at a historically low 48 per cent.

Sunday’s voting takes place amid a rising number of new cases in the southeastern European nation. Earlier in the week Romania recorded 1,767 new Covid-19 infections in one day, the highest number since the start of the pandemic.

Polling stations were providing disinfectant and allowing a maximum of five voters in at once, leading to complains over long queues on social media. Voters were required to wear face masks and keep a distance of at least one metre from each other.

Chilean president Sebastian Pinera has unveiled a plan to hand out $2bn in subsidies aimed at creating new jobs or recovering those lost during months of lockdown, aimed at stemming the coronavirus pandemic in the globe’s top copper producer.

Mr Pinera said the government would pay private businesses up to 50 per cent, or as much as $317 of the salaries of any newly hired employee for the next six months. A similar program will cover up to around $200 of the salaries of employees who return to work after a furlough period during the coronavirus crisis.

The package, which seeks to create one million new jobs, is the latest round of stimulus aimed at revitalizing Chile’s frail economy.

France has recorded another vast daily caseload above the symbolic threshold of 10,000, but below a record of 16,096 set earlier this week.

The total number of cases now stands at 538,569, according to the health ministry.

A further 27 people  have died after contracting the virus, bringing the official death toll to 31,727.

While England’s contact-tracing app currently only allows users who booked their coronavirus tests through the app to log the results, the Welsh government sought to distance itself from the fiasco.

Some 53,000 small Spanish flags have been planted in a Madrid park to honour the dead of the pandemic, an association of families of coronavirus victims have said.

Volunteers placed the flags on a grassy slope overlooking a main road in the capital early on Sunday.

“I think it is a beautiful homage to the victims, a lot better than the homage that was given by the prime minister,” 62-year-old retiree Honorio Hernandez said.

“I have been in the Arlington National Cemetery and this reminds me of that. These people at the very least deserve this, if not much more.”

Don't Miss it US coronavirus: Florida residents can now enjoy restaurants and bars without restrictions
Up Next COVID-19 cases continue to surge in Ontario and Quebec