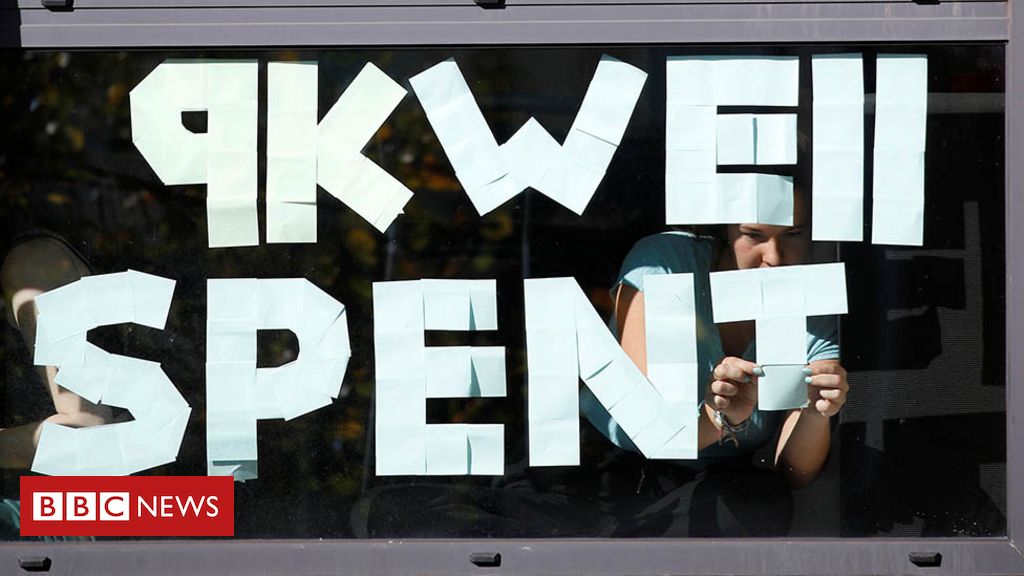 About 40 universities around the UK have now reported coronavirus cases and thousands of students are self-isolating as the new term begins.

The University of Aberystwyth is the latest to suspend face-to-face teaching to reduce the spread of Covid-19.

But the prime minister’s spokesman said students could expect to be able to go home for the Christmas break.

In Scotland, Nicola Sturgeon said ensuring students could go home at Christmas would be a priority.

On whether students in England should receive a fees refund, for example if all their teaching teaching is online, the prime minister’s spokesman said universities were autonomous and would make their own decisions about fees.

Some students have questioned why they were told to leave home and pay for accommodation when most teaching is being done remotely.

Labour has called on the government to consider pausing the return to universities, rather risk further Covid outbreaks and self-isolation for students.

There are no official figures from the government, regulator or Universities UK – but a tracking of local reports suggests about 40 universities have had Covid cases so far – out of about 130 universities in total.

In Wales, the University of Aberystwyth said that from Monday in-person teaching would be temporarily suspended and courses would be taught online.

“This has been a difficult call which is partly driven by uncertainty surrounding the scale of spread within our community,” said a university spokesman.

At Manchester Metropolitan University, all classes for first year and foundation year students will be online for the next 14 days.

At the University of Essex a cluster of cases has been linked to sports teams.

Universities affected by coronavirus cases include:

The University of Exeter, which has also reported a “small” number of cases

Many universities had promised students a mix of in-person and online teaching, raising questions about whether they should get a refund if teaching is only online or if they should be paying for university accommodation if all their lessons are delivered remotely.

Labour shadow education secretary Kate Green said the option of student fee rebates should be kept “absolutely on the table”.

She told the BBC she understood that students might feel they were not “getting the education they expected, that they’ve paid quite substantial fees for this”, but accepted that many universities were “in very difficult financial circumstances”.

Nicola Dandridge, of the Office for Students, said students “have legal rights” but tuition fee refunds are “a question for the government”.

“If students feel they are not getting what was offered to them then they absolutely should raise that with their university and they also have the right to complain to the university ombudsman,” she told BBC Radio 4 Today.

Joe Ward is a student at Manchester Metropolitan University – where students have said they were being prevented from leaving their accommodation by security guards and police.

“If I was made aware that this is how things would be and things would only be online then I definitely would have reconsidered going to university this year,” Joe, who shares a flat with seven others, told the BBC.

“I would definitely like to think that there might be some sort of compensation, but at the same time I understand that for the university it is also quite difficult for them, it is all very new for them as well.

“It’s difficult for both parties but we would definitely appreciate a bit more communication, which is starting to come through now but it’s still early days.”

His flatmate Natasha Kutscheruk said the initial lockdown “caused a lot of panic”, saying the university “should have been prepared and organised before sending out an email saying we are locked down”.

There have been Covid outbreaks in about 40 universities across the UK so far – and there’s every chance that number will rise as more universities get the term under way.

It’s not exactly the university experience that students imagined.

They were promised a mix of face-to-face and online teaching – but the balance seems to be shifting more towards online lessons.

This means even less in-person time with other students and staff and more hours cooped up in their room with online recordings and academic versions of Zoom meetings.

Universities are stuck in their own tight corner. They’re under pressure from lecturers to switch to all online teaching and get students home, rather than create a loop-tape of Covid outbreaks.

But that would provoke angry demands for refunds over accommodation and fees.

Universities cherish their autonomy, but in this case it might feel as though they’re waiting for someone else to make a decision for them.

Larissa Kennedy, president of the National Union of Students, has said the union had “long called for online learning to be the default”.

A statement from Universities UK said: “The sector has put in place multiple safety and health measures – on campus and in student accommodation – to reduce risks.

“Some in-person teaching, support and social activities are being offered by most universities where it is possible to provide these in a social distanced way.”

Coronavirus restrictions in Scotland currently ban people from visiting other households in their home – meaning students cannot return home to another address in Scotland from university accommodation for a short stay without a reasonable excuse, such as a family emergency.

However, new guidance issued by the Scottish government clarifies that students can return home on a long-term basis.

Students who have been told to self-isolate can return home if they need support to do so, including physical, financial or mental health support.

Are you a student? How are the rules affecting you? Share your experiences by emailing haveyoursay@bbc.co.uk.