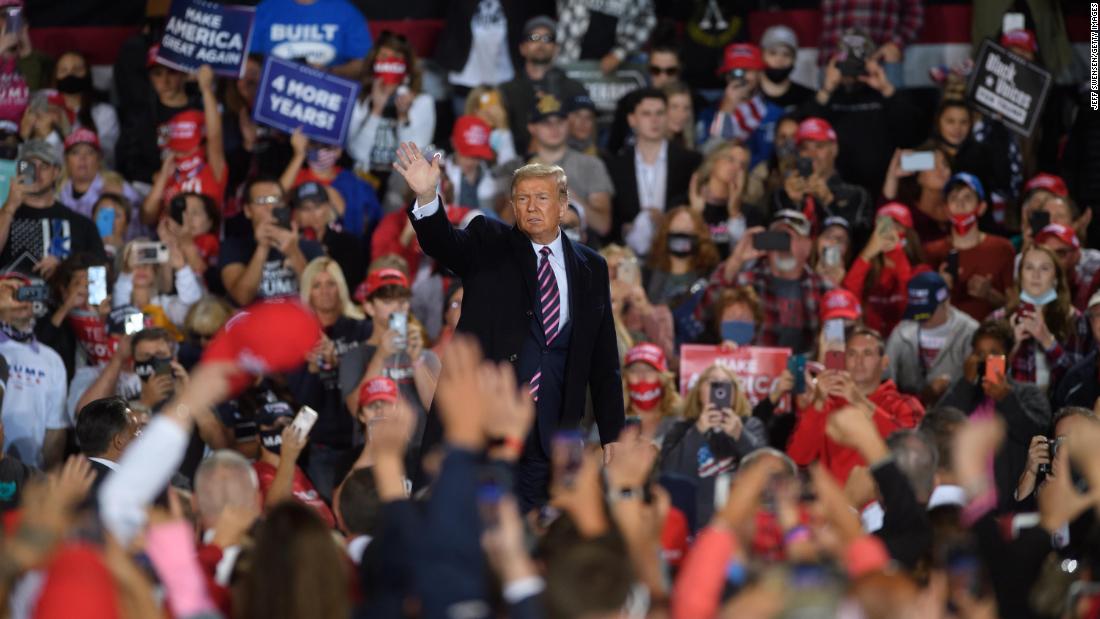 Does that mean Donald Trump is now going to stop having rallies where he jams thousands on top of each other with few wearing masks — as he did Saturday night in Pennsylvania — and instead promote social distancing to prevent any further upticks in the virus? Stop laughing. Of course it doesn’t.Trump typically only does what he believes benefits himself personally and, in this case, he apparently believes the optics of holding packed rallies will somehow help his flailing campaign close the nine-point gap between him and Democratic nominee Joe Biden. Instead, Trump’s latest ploy is to try to convince voters into believing he did a great job handling the virus — and the worst part is he’s using our tax dollars to do this. As Politico recently reported, Trump’s Department of Health and Human Services (HHS) is moving quickly to roll out a $300 million-plus advertising campaign to “defeat despair” about Covid-19. The campaign will include celebrities like actor Dennis Quaid and singer CeCe Winans and Politico reported that HHS is said to be pursuing television host Dr. Mehmet Oz and musician Garth Brooks to take part as well.While the latest ads have not yet aired, senior House Democrats have already raised concerns that it smacks of Trump using the apparatus of government to help win reelection. Earlier this month, House Democrats demanded new documents about department’s contract with the marketing firm handling a campaign on coronavirus, writing: “We have grave concerns that, rather than focus on planning and executing a national strategy to contain the coronavirus, the Trump Administration is using a quarter of a billion dollars in taxpayer money to fund what appears to be a political propaganda campaign just two months before a presidential election.” Democrats have good reason for these concerns given that the person said to have conceived of the campaign is Trump’s hand-picked HHS spokesman Michael Caputo, a Republican political operative with no medical or scientific background and a history of racist tweets about Chinese people. Caputo recently began a medical leave after a cancer diagnosis, but not before launching a rant on Facebook Live video on September 13, where he indicated the goal of this ad campaign was to share “good news” that would help Trump. Democrats, media and “leftist” scientists “cannot afford for us to have any good news before November because they’re already losing … They’re going to come after me because I’m going to be putting $250 million worth of ads on the air,” he said. Add to that,10 current and former HHS officials told Politico that they had concerns over the ad campaign’s possible political goals and its use of money that was earmarked for the Center for Disease Control during the pandemic. While the career HHS official now taking over the ad campaign from Caputo denies that there will be political spin in its messaging, the reality is that it’s Trump, as President, who will have final say in what his administration does.You’d have to be living under a rock or in complete denial of reality not to be at least concerned Trump is trying to use this HHS ad campaign to help himself politically. Perhaps the ads will try to reinforce Trump’s false view that the worst of the virus is behind us — even though the experts say he’s wrong. Or the ads may try to back up Trump’s comments last week that he should get an “A plus” for his handling of the virus. After all, this is the same Trump who in 2018 told his supporters about stories in the media that he viewed as hurting him politically, “What you’re seeing and what you’re reading is not what’s happening.”

Trump is the king of gaslighting. American voters should be vigilant about whether he’s now trying to use our own tax dollars to try to gaslight us.