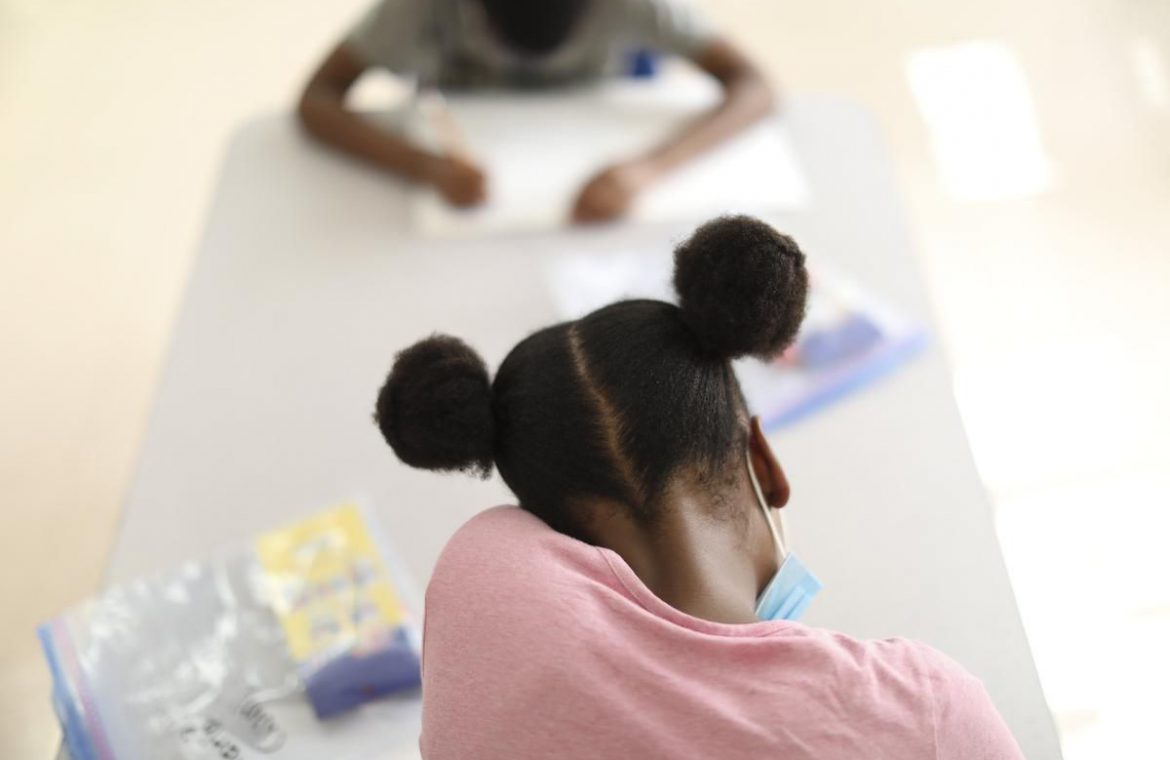 On his first day of school this month, nine-year-old Lionel was nervous and excited — a combination as old as time when September rolls around. Excited, because he wanted to know who his teacher would be for the fourth grade. But his nerves weren’t about new classmates, harder lessons or other typical adjustments to a new school year.

“I felt nervous because I didn’t want to get COVID-19,” Lionel wrote in a journal entry during his first week back to class. He described, on the page, the things that had changed since last year. “We have to wear masks, some of my friends left and when we go to the classroom we can’t go straight to our chair, we have to go in a circle wash my hands and then go to our seat.”

The main target of his ire was wearing a mask during school hours, evident in all capital letters: “I DO NOT LIKE IT AT ALL!!!”

But other frustrations showed through, too: “I have a hard time social distancing because I want to play with my friends.”

Lionel is one of more than a thousand children living in Toronto’s shelter system during the pandemic. Following a Star story in August, where families and kids in shelters revealed their struggles keeping up with online learning this spring, the Star invited Lionel and several other kids living in shelters to keep journals of their first week back to class.

Some wrote the entries themselves; shelter staff transcribed for some of the younger children while they dictated. The resulting entries reveal fears about getting sick and adjustments to new rules, but also moments of joy and relief. Together, they offer a glimpse inside Toronto’s school system from the eyes of its students, as everyone adapts to an atypical school year.

“School was … okay, because it wasn’t like I expected but we did get out at 11, so I guess it has its goods and bads,” Joela, a 14-year-old starting Grade 10, wrote during the first week.

“It’s different, because, before COVID, it was a full day. We actually had lunch with friends and didn’t have to worry about who and what can get me sick. On the train, I have to sit by myself. I only have one class now and each time I go to the washroom, I come back and I have to sanitize my hands. I mean, I get it, but it’s so strict.”

The strangest adjustment, for her, was having to do e-learning for part of the week, and only attend school in-person on certain days. “I only go on Wednesdays and Fridays and my other friends go on Tuesdays and Thursdays and some people just stay home and do online. I don’t like that because I miss seeing people, like my school people,” her journal entry reads.

Lionel, the nine-year-old, reflected on the new rules his teachers had explained about using the bathroom. “My teacher told us that we can’t just use the washroom because we have certain times to use it,” he wrote.

Marcelle, a 10-year-old starting the fifth grade, also pointed out the change. “The weirdest thing is that we have to go to the bathroom on a certain time.”

“We now because of COVID have to go through a certain stairwell, door and bathroom, even though the nearest bathroom beside our class is upstairs but we have to go downstairs and we’re only allowed to go to the bathroom twice and after recess,” said Maria, 11. The strangest change this year, in her view, was the rules around distancing at recess. “The hills are white spray painted and each grade class has a numbered pod. My class is pod number eight.”

E-learning had driven her crazy in the spring, Maria said, so being in class properly was more fun. Still, she has some hesitations. “I worry about someone being sick,” she wrote. Marcelle was wary, too. “All 27 kids came to school today, so I was nervous because it is Corona.”

Seven-year-old Arao noted that his teachers instructed them that they couldn’t share their things with other kids. “We have a lot of new rules, and I cannot see my brother in grade one,” his entry reads. “My friends feel the same as me, they do not like the changes. My friends and I always talk about how we cannot wait for school to be done.”

A common frustration in many of them entries was keeping masks on inside the school building. “That’s the part that annoys me the most,” Joela wrote. “I put my mask on, I have to still social distance, if I don’t people still remind me like I’m some dumb person. Most of the time I take my mask off because I can’t breathe or because I want to talk to someone properly.”

One 10-year-old described the masks as simply difficult, while another said they were “suffocating.” Marcelle wrote that wearing one all day felt like being a prisoner. Her friends were annoyed with having to wear them, too, she reported — they felt like they couldn’t breathe.

For some kids, the mask requirement elicited mixed feelings. “I sometimes like wearing my mask because it makes me feel safe and I do not want germs or to be sick,” second grader Arao reported. “Sometimes I don’t like wearing it because it gets hard to breathe.”

Others, meanwhile, kept their thoughts simple when it came to their new protective gear. “I feel safe,” 11-year-old Madalena wrote. “I am happy that I’m back to school.”

Moments of comfort and joy

While the journal entries revealed fears and anxieties about the new normal as the first week chugged along, they also revealed moments of familiarity and joy returning to school: seeing friends they missed, having a tasty snack with their lunch, or playing sports with other kids.

“It feels good (to be back) because I wanted to see my friends in person and I wanted to talk to them,” nine-year-old Lionel wrote. He liked walking to school again, too. “School is good. I am happy,” Thana, 10, reported.

Maria noted she found two four-leafed clovers outside, which she presented as a highlight — though she said she felt “dirty and tired” coming back to the shelter.

Anthony, 11, said he helped his friend in class, and, in the best part of his day, played soccer. Arao celebrated because his class “watched a movie and had snacks.” His biggest concern wasn’t pandemic-related at all, but waking up early again. “I am always tired now,” he wrote. Ten-year-old Sahana, meanwhile, said her main worry for the coming year was learning math.

Joela happily described a reunion with a friend, describing it as the best part of her day.

“We don’t have the same class and I miss her so, so, so much,” she wrote. Amid all the changes being implemented during school hours, Joela noted that coming back to the shelter provided a bit of normalcy. “This is the only place that didn’t change as much,” she said.

But for 10-year-old Rania, being back to school in-person was what made things feel closer to the way they did before the pandemic struck: “It feels a little bit like being normal.”

Victoria Gibson is a Toronto-based reporter for the Star covering affordable housing. Her reporting is funded by the Canadian government through its Local Journalism Initiative. Reach her via email: victoriagibson@thestar.ca