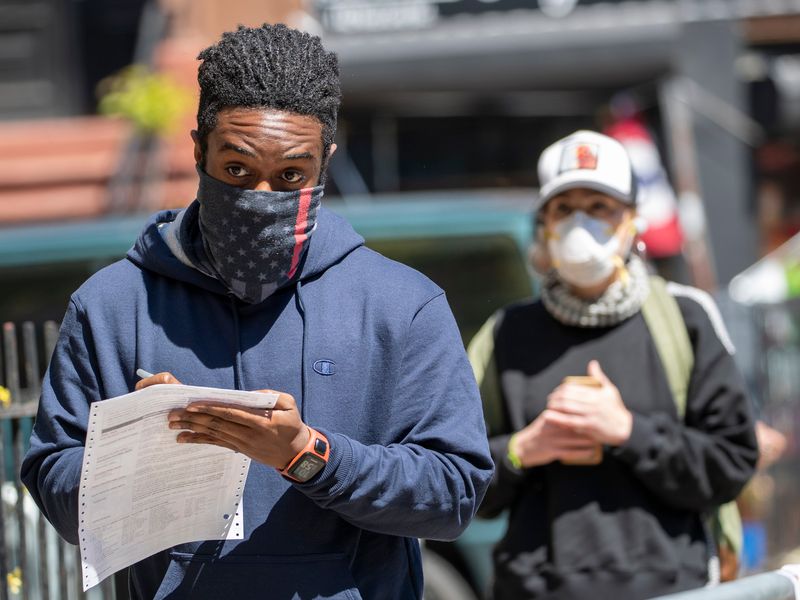 Rolnitzky said that many members of the Hasidic community he works with believe they’d developed a herd immunity over the summer and that some people relaxed their expectations toward following safety standards.

On Wednesday, Mayor Bill de Blasio announced a new initiative to provide free masks to the public. This will include offing information and monitoring compliance in these infected zip codes. De Blasio will add 400 NYPD officers, 250 compliance officers from city agencies, and 300 members of the test and trace corps to help monitor the situation. The city sheriff and Office of Special Enforcement will be overseeing the outreach.

“We saw good compliance when folks were encountered, when there was a discussion, we saw a very high level of compliance,” de Blasio said, adding that businesses could be fined or shutdown if they do not enforce social distancing and mask wearing.

“There’s going to be a very rigorous inspection effort of those zip codes,” he added.

But not everyone is happy with announcement of increased inspections, notably small business owners. As owner of the Ritz Bar & Lounge in Midtown, Tommy Greco has had his fair share of encounters with State Liquor Authority personnel since the mandated mask policy was announced earlier this year, inspections which he characterized as intrusive and unhelpful.

“It was horrible,” he said. “It wasn’t cordial, like ‘hey, we know you’re going through a lot.’ They treated me like I was guilty of something.”

Greco said each time an SLA official came through his door they’d be accompanied by a state police officer.

“We had the same inspector three times,” he said. “It was like Groundhog Day.”

While some New Yorkers have voiced concerns that the mayor’s—and by extension NYPD’s— heavy-handed enforcement mandate could provoke instances of discrimination, others believe that isn’t something a vast majority of city residents should worry about.

“I haven’t seen that,” said Tiecha Merritt, a Black female owner of The Bush Doctor Juice Bar in Bedford-Stuyvesant. “It’s amazing how New York is in compliance with it, especially in our neighborhood.”

The New York Civil Liberties Union said they have received no complaints of NYPD or City Agency personnel targeting residents on mask compliance based on race or religion and that from their perspective mask enforcement has been aligned with public health protocols.

Even the MTA, which instituted a $50 fine for a lack of mask compliance, had 6,000 encounters with riders over the last two weeks. 2,861 were to distribute masks to those riders who did not have one; 2,495 were to instruct riders how to wear one properly; and six were to level fines on riders for not wearing one at all.

“This fine was a last resort. The main purpose was to get people to wear masks,” said Ken Lovett, an MTA senior spokesperson.

But as this new cluster arises in Brooklyn and Queens, all eyes will be on the de Blasio’s mask enforcement task force. One pair watching closely lie in Albany, as Gov. Andrew Cuomo implied on Wednesday that he will take over enforcement if the city proves incapable.

“I’m not going to let it happen because we have an incompetent local government,” Cuomo said. “Either you do the job or people die.”

Don't Miss it ‘It feels a little bit like being normal’: Children in Toronto’s shelters share their thoughts on back-to-school under COVID-19
Up Next Why the US presidential debate saw no winner | DW News