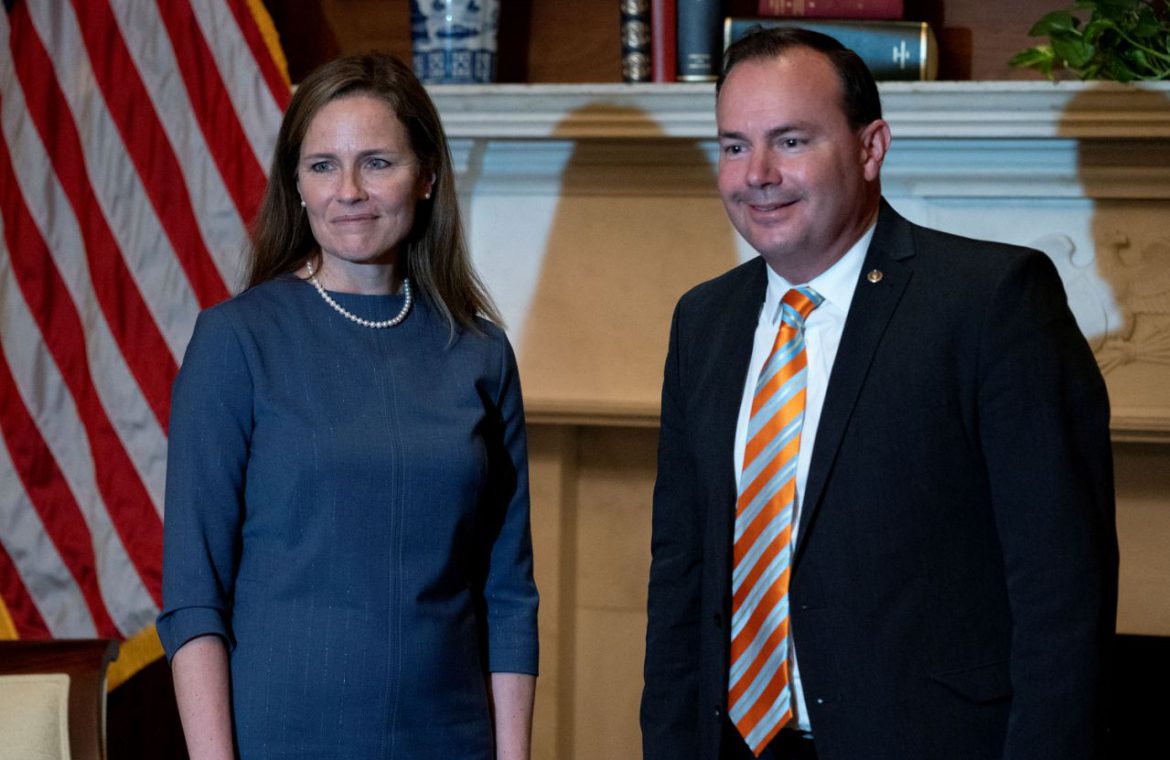 Sen. Mike Lee, R-Utah, a member of the Senate Judiciary Committee, which will hold hearings on President Trump’s nomination of Amy Coney Barrett to the Supreme Court, announced Friday that he had tested positive for COVID-19 and said he would self-isolate for the next 10 days. Lee said he has assured Senate Majority Leader Mitch McConnell and Senate Judiciary Chairman Lindsey Graham that he would “be back to work in time to join my Judiciary Committee colleagues” in advancing the nomination.

Others who attended Saturday’s Rose Garden announcement of Barrett as Trump’s pick to replace Justice Ruth Bader Ginsburg have since tested positive, including Trump himself, first lady Melania Trump, Hope Hicks and Notre Dame president the Rev. John Jenkins. Other Republicans on the Judiciary Committee, including Sens. Mike Crapo of Idaho, Ben Sasse of Nebraska, Thom Tillis of North Carolina and Josh Hawley of Missouri, also attended the Rose Garden event. As of noon on Friday, they had not publicly disclosed information about their test status.

Video of the Rose Garden event showed Lee, who was not wearing a face mask, hugging fellow attendees.

The White House said Barrett herself is tested daily and that the results have come back negative. But the Washington Post said Friday that, based on three sources, Barrett had contracted the virus earlier this year but has since recovered.

There is some uncertainty about whether people who recover from COVID-19 can become infected again, and if so, how soon.

Republicans have little wiggle room with which to confirm Barrett’s nomination before a new Senate is sworn in on Jan. 1. Democrats are leading several key races and could take control of the body in next month’s elections. For now Republicans control 53 seats. They need 51 votes to confirm her (one of which could be supplied by Vice President Mike Pence if the Senate is tied) and two GOP senators — Lisa Murkowski of Alaska and Susan Collins of Maine — have said they will not vote to confirm Barrett. If more than one Republican — and no Democrats — are incapacitated and unable to vote, Barrett’s nomination could be stalled.

The Judiciary Committee is scheduled to begin confirmation hearings on Oct. 12, the same date that Lee has promised to return to Washington after self-isolating. On its website, the Centers for Disease Control and Prevention states that people who test positive for COVID-19 should avoid contact with others “at least 10 days since symptoms first appeared” and “for at least 24 hours with no fever without fever-reducing medication.” On a separate page on its website, the CDC also recommends that people exposed to the virus should “stay home until 14 days after last exposure and maintain social distance (at least 6 feet) from others at all times.”

Lee met with Barrett on Tuesday in his Senate office. The two posed for a picture standing less than 6 feet apart, neither wearing a face mask.

I was remarkably impressed by Judge Barrett. My meeting with her was fantastic. She is a judge, a legal scholar, and a lawyer with outstanding credentials. We had a great conversation and I am very much looking forward to speaking with her more during her confirmation hearing. pic.twitter.com/rfGt717PlW

That same day, Crapo touched elbows with Barrett in his office.

I had a great meeting with Judge Amy Coney Barrett today to discuss her fitness for the Supreme Court. Judge Barrett is conscientious in her application of jurisprudential principles. She is preeminently qualified and has assured me she will interpret the law as it is written. pic.twitter.com/Bb9hiMJqYF

One day later, Tillis also met with Barrett in his office.

I had a great meeting with Judge Amy Coney Barrett, which reaffirmed what a supremely qualified nominee she is and I look forward to getting her confirmed. Judge Barrett made it clear that her duty is to uphold the Constitution and interpret the law as written. #ACB #ConfirmACB pic.twitter.com/wRzbnw33m4

Graham, the Judiciary Committee chairman, vowed to press ahead with hearings for Barrett. Minority Leader Chuck Schumer and Sen. Dianne Feinstein of California, the ranking Democrat on the committee, put out a joint statement calling Graham’s commitment “premature.”

“The unfortunate news about the infection of our colleague Senator Mike Lee makes even more clear that health and safety must guide the schedule for all Senate activities, including hearings,” the two Democrats said, adding that holding the hearing remotely “is not an acceptable substitute.”

“All circuit court nominees have appeared in person during the pandemic,” they noted, “and there is far more at stake for the American people with this Supreme Court nomination, including the Affordable Care being struck down and more than 7 million COVID survivors being denied health coverage. It’s critical that Chairman Graham put the health of senators, the nominee, and staff first — and ensure a full and fair hearing that is not rushed, not truncated, and not virtual. Otherwise this already illegitimate process will become a dangerous one.”