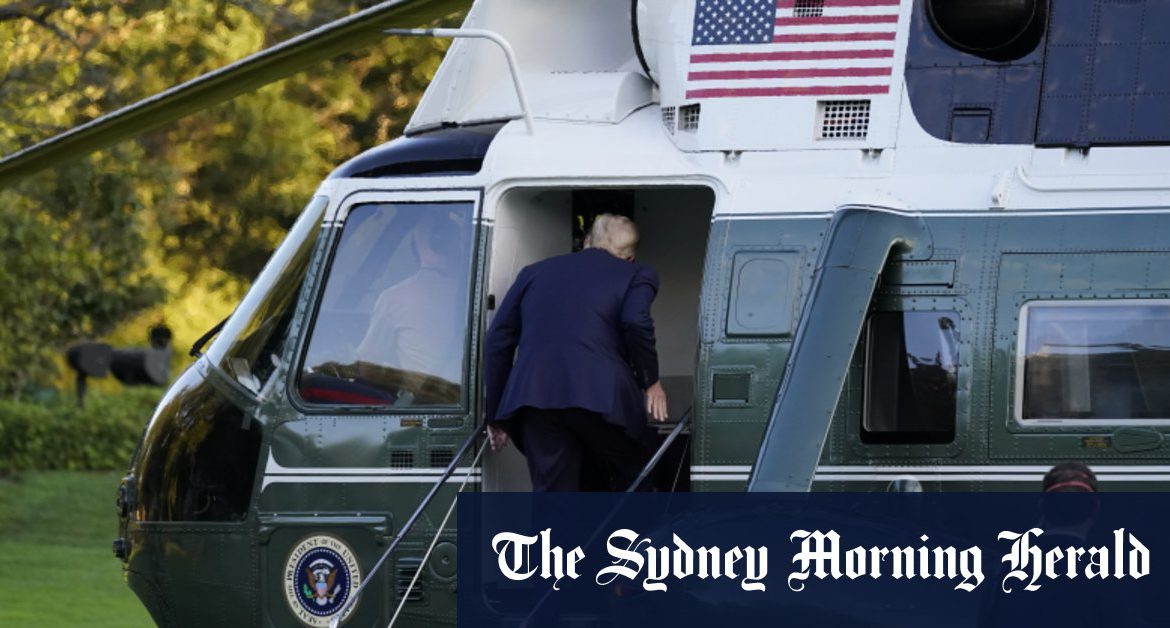 The White House stressed that no transfer of power had taken place and that Trump, rather than Vice-President Mike Pence, remained in charge of the executive branch of government.

Trump has not made any further public statements, including on his Twitter feed, since he announced that he and wife Melania had tested positive for coronavirus. He did not make any statements to the media before boarding Marine One.

Marine One on the White House South Lawn, awaiting to transfer US President Donald Trump to the Walter Reed Medical Centre. Credit:AP

Earlier, the Trump campaign announced that all the President’s upcoming events are being temporarily postponed, or moved to a virtual setting, following his diagnosis. It is unclear if Trump will be able to participate in the next presidential debate, scheduled for October 15.

Trump’s son Eric described his father as a “true warrior” and asked Americans to pray for the President.

“He will fight through this with the same strength and conviction that he uses to fight for America each and every day,” Eric Trump said in a tweet. “I have never been more proud of someone and what they have had to endure.”

Former president Barack Obama and wife Michelle said in a statement that they wished the President and first lady a speedy recovery.

The Obamas said it was important to remember that “even when we’re in the midst of big political battles with issues that have a lot at stake, that we’re all Americans and all human beings”.

Democratic House Speaker Nancy Pelosi said she greeted the news of Trump’s positive diagnosis with “great sadness”, adding that she hoped it would be a “learning experience” for those who have downplayed the virus.

“This is tragic, it’s very sad,” Pelosi told MSNBC. “But also is something that, again, going into crowds unmasked and all the rest, was sort of a brazen invitation for something like this to happen.”

On Friday morning (Saturday AEST) Vice-President Mike Pence announced that he had tested negative for the virus, as did Democratic nominee Joe Biden.

“I’m happy to report that Jill and I have tested negative for COVID,” Biden said in a statement.

“Thank you to everyone for your messages of concern. I hope this serves as a reminder: wear a mask, keep social distance, and wash your hands.”

Earlier in the day Biden and his wife Jill wished the President and first lady a “swift recovery”.

“We will continue to pray for the health and safety of the president and his family,” Biden said on Twitter.

Matthew Knott is North America correspondent for The Sydney Morning Herald and The Age.