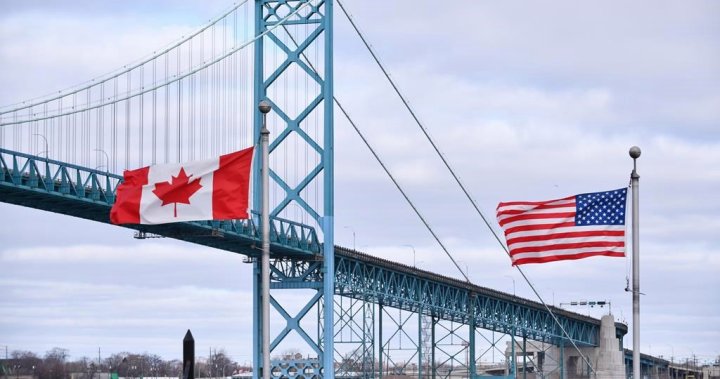 A group of United States senators from Maine and New Hampshire are calling on President Donald Trump to ease travel restrictions on the Canadian border, despite a continued rise in coronavirus cases in both countries.

The letter was sent to the president Tuesday, before Trump himself tested positive for COVID-19 early Friday morning.

It also came before Canada on Friday added stronger public health and enforcement measures at the border while easing restrictions for families separated by the longstanding closure to non-essential travel.

The senators, however, want those border restrictions eased further. In the letter, they argue the restrictions “put an immense strain on the communities that straddle the border,” which rely on cross-border trade and commerce.

They also claim that “at this time, the risks of significant cross-border transmission in numerous border jurisdictions appear to be low.”

“Just as many American states have loosened restrictions on certain activities and interstate travel, an absolute restriction on non-essential travel across the entire U.S.-Canada border should be reevaluated,” the four senators write.

In a statement, a spokesperson for Public Safety Minister Bill Blair reminded that cross-border trade and commerce has always been allowed since the border was first closed on March 21. Work-related travel has also been allowed under the restrictions.

“The situation surrounding the COVID-19 pandemic continues to rapidly evolve, and we have been clear that our response will adapt in lock step,” the spokesperson said.

“Going forward, we will continue to evaluate the best public health information available to us to make a decision on when and how to reopen our border. This decision will be made with the best interest of Canadians as our top priority.”

Immigration Minister Marco Mendicino announced Friday that more family members of Canadian citizens and permanent residents will now be eligible to enter the country. The federal government is also implementing a compassionate-entry program for those who don’t qualify as family but want to enter Canada for specific reasons, such as to see a dying loved one.

Families separated by the border restrictions have been pressuring the government for weeks to relax the rules, which have been extended in 30-day increments after reviews of the pandemic situation in both Canada and the U.S.

For all other travellers, the quarantine and other screening measures remain in place until the current deadline of Oct. 21, and Blair said enforcement will be stepped up.

On the same day in September that the deadline was extended another 30 days, Trump claimed that the border would soon be reopened.

“We’re looking at the border with Canada. Canada would like it opened and, you know, we want to get back to normal business,” he told reporters in Washington.

Trump went on to praise the U.S.-Canada-Mexico trade agreement, and say that the border would be reopening  “pretty soon” — potentially by the end of the year.

While Maine and New Hampshire are trending relatively downward in daily confirmed coronavirus infections along with the rest of the northeast, other border states — including Montana and Minnesota — have seen spikes over the past two weeks, according to an analysis of public health data by Reuters.

At the same time, Canada’s four largest provinces are seeing a second surge of infections, particularly Ontario and Quebec, the latter of which border Maine and New Hampshire. Quebec reported over 1,000 new cases Friday, while the country over all reported over 2,000.

There had been a previous effort from U.S. Congress members to reopen the border with Canada amid the pandemic.

In early July, a bipartisan group of 29 federal lawmakers sent a letter to Blair and acting Homeland Security Secretary Chad Wolf, urging both countries to “immediately craft a comprehensive framework for phased reopening of the border.”

At that time, the U.S. was experiencing its own second surge in cases, although many of the states considered hotspots were further south.

In response to that letter, a spokesperson for the office of Deputy Prime Minister Chrystia Freeland said that while conversations between Canada and the U.S. about the border are ongoing, “both sides agree that the current measures in place” have “worked well.”

Although the Canada-U.S. land border remains closed until at least Oct. 21, Canadians can still fly into the U.S. as long as they have not recently been to countries such as China, Brazil or the United Kingdom.

The government of Canada still emphasizes that all non-essential travel outside of Canada must be avoided. The government has made it clear on its website that if Canadians travel abroad during the pandemic, not only do they run the risk of infecting themselves or others with the novel coronavirus, they also run the risk of being stranded in a foreign jurisdiction.

— With files from Katie Dangerfield and the Canadian Press