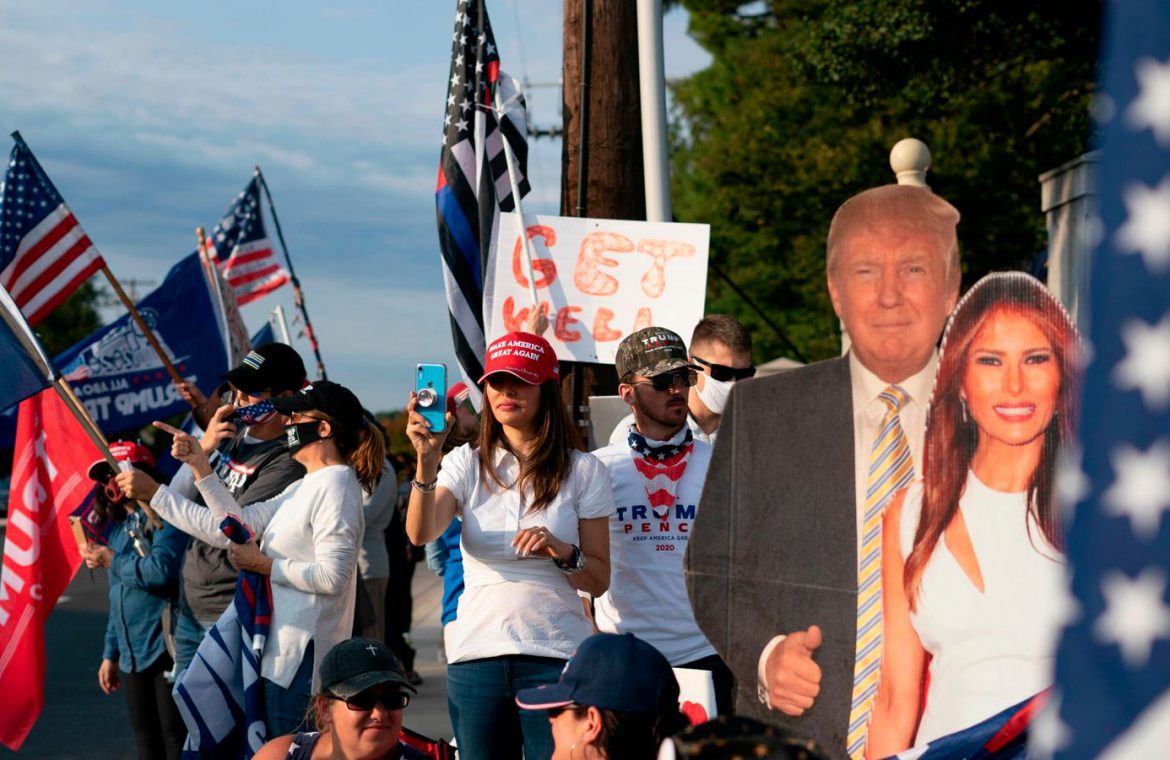 Horns had been blaring all day as Donald Trump’s supporters drove up and down the road outside his hospital.

Whether the president could see or hear the mini rally that had grown outside, he was all too aware of their presence.

Then the horns suddenly fell silent for the first time all day. A line of police appeared. The road emptied. A video message dropped on Twitter of Mr Trump announcing he was going to make a little surprise for the “great patriots” outside. Within seconds, a long motorcade appeared in the distance.

As it drew closer the cheers grew. The president was here to greet his adoring fans. His supporters went wild. Screams, cheers, “Four more years”.

Trump says ‘I get it’ before motorcade ride

As if to clear up any lingering doubt that this could possibly be happening, the motorcade then turned and drove back up the road past the world media. And there he was. Two metres from us. Mr Trump in a vehicle with others. Positive with COVID-19.

While he was wearing a face mask, it didn’t appear remotely safe for him to be sitting in a vehicle so close to his security team. The virus is so contagious, patients have to isolate. Apparently not if you’re the president.

The surprise nature of this visit shocked everyone. As we had to quickly process what was happening around us, the questions began to arise thick and fast. How is Mr Trump allowed to leave hospital in his condition? Did his medical team agree to this? How do the people in the vehicle feel about being so close to him? Did anyone even have a say?

Since Mr Trump’s diagnosis emerged, various conspiracy theorists have suggested his illness was a hoax. While that has been dismissed as far fetched, this recent appearance does call into question how someone with a life-threatening illness could behave so irresponsibly.

In his latest video message from hospital, Mr Trump said he has learned a lot about COVID. “I get it. And I understand it,” he said. Does he? To put the lives of his secret service agents at risk to greet a MAGA rally suggests the opposite.

Slightly earlier Mr Trump had tweeted an article by the Sunday Express reporting a new favourable poll that showed 19% of people were more likely to vote for him after his diagnosis compared to only 13% of people who were now less likely.

It suggests Mr Trump is keeping a close eye on the political PR opportunity of this occasion. A chance to reset his message on the pandemic – that he now “gets it”.

If Mr Trump continues to behave so recklessly, if his vice president continues to hold rallies despite so many of the top team in the White House testing positive, it suggests this president and this administration have learned nothing at all.

This appearance has thrilled his supporters. But you don’t need to stray far from the rally at Walter Reed to hear the horrified reaction.

“He still doesn’t grasp the reality,” a waiter, John, tells me. “How do you put all those people in danger? How ignorant is that? It’s all about him. It’s not about the country. It’s all about the Donald”.