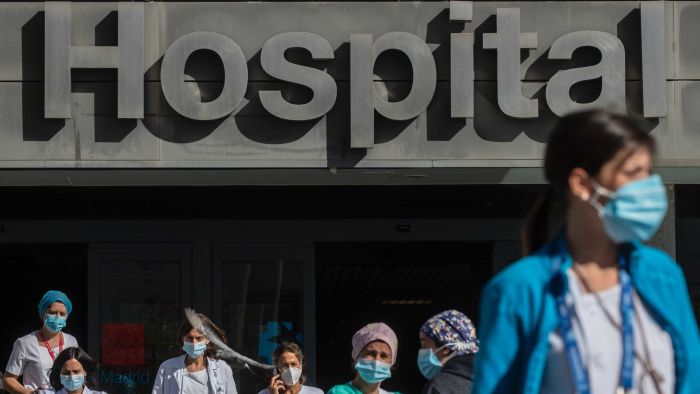 Roughly one in 10 people may have been infected with coronavirus, leaving the vast majority of the world’s population vulnerable to the COVID-19 disease it causes, the World Health Organization (WHO) has said.

Key points:The WHO has said most of the world remains at risk from the spread of coronavirusAustralia has reiterated its calls for a timely investigation into the origins of the pandemicRussia has said it wants an evaluation of the consequences of the US leaving WHO

Mike Ryan, the WHO’s top emergencies expert, was addressing the agency’s Executive Board when he gave the estimate, which is more than 20 times the number of confirmed global cases.

Dr Ryan said as he warned the world was “heading into a difficult period,” and that as South-east Asia faced a surge in cases, Europe and the eastern Mediterranean were seeing an increase, while the situations in Africa and the Western Pacific were “rather more positive.”

“The disease continues to spread. It is on the rise in many parts of the world,” he said

“Our current best estimates tell us that about 10 per cent of the global population may have been infected by this virus.”

He was flanked by his boss, WHO Director-General Tedros Adhanom Ghebreyesus, who minutes earlier led a moment of silence to honour victims, as well as a round of applause for the health workers who have strived to save them.

Dr Michael Ryan says the WHO has submitted a list of experts to travel to China for an investigation into the origins of the pandemic.(Reuters: Denis Balibouse)

During the meeting, the United States made a thinly-veiled swipe at China for what it called a “failure” to provide accurate and timely information on the outbreak.

But Zhang Yang of China’s National Health Commission, said: “China has always been transparent and responsible to fulfil our international obligations.”

China maintained close contacts with all levels of the UN health agency, she added.

The WHO and other experts have said that the virus, believed to have emerged in a food market in the central Chinese city of Wuhan late last year, is of animal origin.

The WHO has submitted a list of experts to take part in an international mission to China to investigate the origin, for consideration by Chinese authorities, Mr Ryan said, without giving details.

US assistant health secretary Brett Giroir said it was critical that WHO’s 194 member states receive “regular and timely updates, including the terms of reference for this panel or for any field missions, so that we can all engage with the process and be confident in the outcomes”.

Germany, speaking for the EU, said the expert mission should be deployed soon, with Australia also supporting a swift investigation.

Meanwhile, Alexandra Dronova, Russia’s deputy health minister, called for an evaluation of the legal and financial repercussions of the Trump administration announcing the US withdrawal from the WHO next July.

The United States will not pay some US$80 million ($111 million) it owes the WHO and will instead redirect the money to help pay its UN bill in New York, a US official said on September 2.

Space to play or pause, M to mute, left and right arrows to seek, up and down arrows for volume. The world’s most powerful computer has revealed how COVID-19, an invisible virus, can spread in the office.What you need to know about coronavirus: