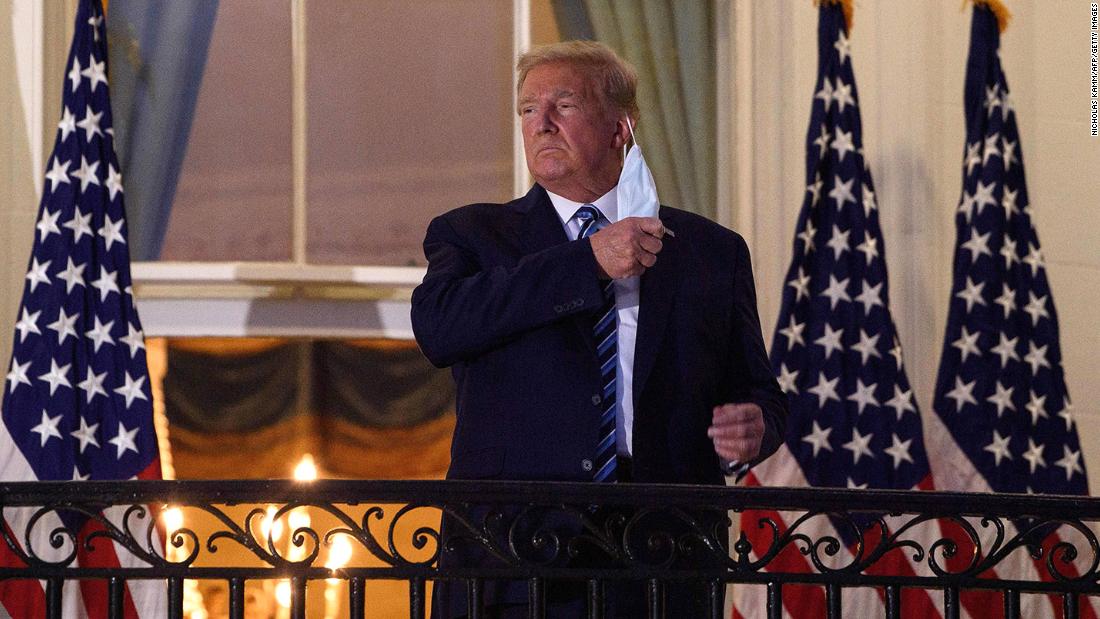 Returning to the White House while still infected with a potentially deadly virus, he ostentatiously turned to the cameras and removed his facemask before walking in, making his every breath inside the building a threat to the health of the people working there. It was one more grotesque piece of Trump’s coronavirus theater of the past few days, which for some reason he thinks will boost his political prospects, but more likely horrified those increasingly appalled by his behavior.

If you thought that after coming face to face with his mortality the President would experience a life-changing moment of deep introspection, you were wrong. On the contrary, Trump’s illness appears to have solidified his unwavering faith in the catastrophic policies that left not only him and his staff unprotected from a pandemic, but encouraged Americans to take deadly risks and pay with their lives.

Three days after the Marine One helicopter performed a medical evacuation of the President of the United States from the White House lawn, Trump tweeted a startling message; startling, because it shows an utter inability to learn from experience. After announcing he would leave the hospital on Monday, he tweeted to tens of millions of followers:

“Don’t be afraid of Covid. Don’t let it dominate your life.”

It’s a message that will cost more lives.

Most people, after enduring a jolting, potentially life-threatening event, emerge changed, even if only temporarily. There was a chance Trump would realize he had not warned Americans enough about the virus; a chance he would recognize that his nonchalance had resulted in deep suffering among those who ended up sick or who lost a loved one who followed his advice about masks and social distancing not being essential. There was a slim hope that after enduring Covid-19 he might say, or at least think, “I was wrong. I should be more careful and tell the American people that we should all take the disease seriously.”

Not him. Nothing has changed.

It’s all theater. It’s all show. Who else puts on a suit and tie for an emergency helicopter ride to the hospital? It’s all about creating an image and benefiting from it.

That has been his tactical approach to the pandemic all along. Tell Americans the virus is no big deal, get on with your lives, so that he can continue claiming that he’s doing a great job as President. It’s the strategy that has left the United States with the highest number of infections and deaths in the world — 4% of the population, with 20% of the deaths — even though no country on earth enjoys greater medical, technological and scientific resources to fight the pandemic. When Trump fell ill — whenever that was; we’re still not sure — he had access to every possible advantage. The nearly 7.5 million Americans infected, the more than 210,000 who have died, the hundreds of thousands who have tested positive in the past few days, can’t summon helicopters to their back yards if they need to rush to the hospital; few people have teams of doctors, and access to every possible medication as he has.

Trump’s extraordinarily irresponsible, reckless strategy of downplaying the dangers, didn’t just fail to protect him, the President responsible for the security of his country, it also put his staff and his supporters at risk. How many are sick; how many will die?

The September 26 ceremony at the White House, where he nominated Judge Amy Coney Barrett to succeed the late Justice Ruth Bader Ginsburg — ignoring her final request and the wishes of most Americans, who say the winner of the November election should make the pick — was a shocking spectacle of hubris. The only thing missing was a tableau of Trump fiddling before a country in flames. Those of us who watched the crowded, mostly maskless nomination announcement, could barely believe our eyes — the crowds, the hugs, the kisses. It only made sense that it became a likely super-spreader event; that so many of those present contracted Covid-19.

Why weren’t they wearing masks, indoors or outside the White House? Because Trump apparently thinks masks undercut the image of normalcy that will help him win reelection. It’s a foolish and immoral strategy. Americans know this is no normal time.

Trump has mocked his rival, former Vice President Joe Biden, for wearing a mask and protecting himself from the dangerous coronavirus. Now his campaign argues that Trump is better qualified than the Democratic candidate because, “He has experience now fighting the coronavirus … Joe Biden doesn’t.” The word for that is chutzpah. Shamelessness. Trump’s salesman techniques may have fooled Americans into thinking he was a great businessman, but this time they’re not working. Most Americans see Trump is the one responsible for his troubles. A CNN poll found two-thirds of Americans say Trump handled the risk of coronavirus infection to others around him irresponsibly. Similarly, an ABC/Ipsos poll found 72% think Trump didn’t take precautions to avoid infection and didn’t take the virus seriously enough.

Trump’s brazen, misguided selfishness was also on display Sunday night, when he decided to leave his hospital room to soak up the adulation of his supporters with a ride in the back of tightly-sealed Chevy Suburban, unnecessarily placing his Secret Service detail at risk of inhaling his toxic exhalations.

As the number of infected White House staffers climbs, along with positive tests among other Republican officials following Trump’s lead, he has shown little concern for their health, or for the need to protect Americans. After his senior aide Hope Hicks tested positive, he continued campaigning in person.

Covid is the worst public health crisis America has experienced in more than a century. It has killed more than a million people worldwide. It only makes sense to be afraid, to take precautions. But Trump wants voters to think everything is fine. “Don’t be afraid of Covid. Don’t let it dominate your life.”

That is exactly what he has been telling Americans since the pandemic started, even as he knew the truth about the virus didn’t jive with the advice. Recall that back in February, as he was publicly declaring that the pandemic was nothing to worry about, he told journalist Bob Woodward, “This is deadly stuff,” many times deadlier than the worst flu. Trump knew. He knows.

He’s just clearly incapable of introspection. Incapable of changing. Incapable of learning. It’s the same Trump, still gaslighting Americans about a grave threat to their lives. Still pushing policies that will lead to more deaths.

Don't Miss it Nearly 60% of coronavirus tests in Argentina return positive — the world’s highest rate – National
Up Next Coronavirus news live: Latest updates as deaths rise for third week in a row in England and Wales