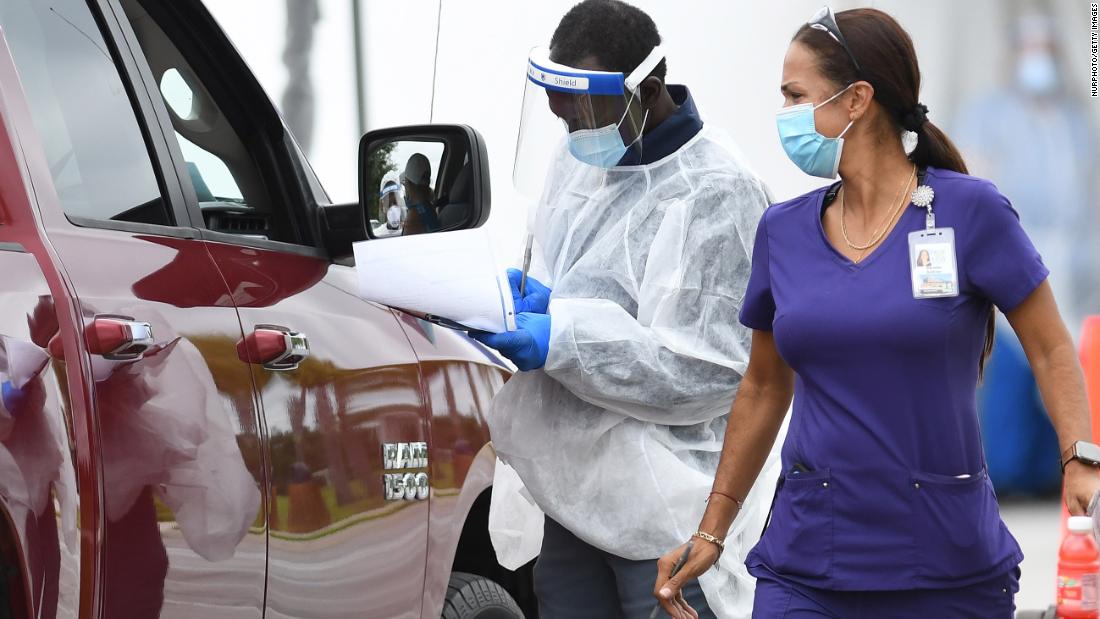 Those states are Hawaii, Kansas, Missouri and South Carolina. And overall cases across the nation are on the rise. More than 50,000 daily cases were reported on Friday and Saturday. The last time the US saw more than 50,000 cases back to back was mid-August.

Several states have reported record high numbers in the last few days. Alaska, Indiana, Kentucky and Montana reported their highest 7-day averages for new daily cases over the weekend, according to JHU data.

In Kentucky, Gov. Andy Beshear last week raised the alarm about “escalating” cases and urged residents to be on guard. He announced Monday the state will be stepping up mask enforcement.

“We need to make sure that everybody out there is getting back to the place where, in your business, you cannot check somebody out if they are not wearing a mask, it shouldn’t matter who they are,” Beshear said.

In Wisconsin, new cases are averaging at about 2,400 daily — the third highest in the country behind Texas and California. That’s up 15% from what the state was averaging in the previous week. At least 22 states are reporting more new cases than the previous week, with many across the Midwest and now increasingly in the Northeast.

Months into the pandemic and ahead of what experts say could be a difficult winter season, the US remains behind when it comes to Covid-19 testing, the Director of the National Institute of Allergy and Infectious Diseases Dr. Anthony Fauci said.

“We’re better off now than we were a couple of months ago, that’s for sure,” Fauci told CNN’s Chris Cuomo Monday night. But the country is still not where it needs to be, he said.

In the battle against the virus, experts have continually stressed how testing is critical. When done right, it can help health officials identify infections quickly and place those individuals in isolation before more people become infected. It can also give local leaders an idea of the level of infection within a community.

“We need to flood the system with testing,” Fauci said.

The US has conducted more than 107 million tests since the pandemic began.

More than 210,000 have died and there have been more than 7.4 million recorded infections — but the number of true infections is likely far greater than that, the US Centers for Disease Control and Prevention has said. And that’s likely because of the lack of testing in the first months of the pandemic, experts say.

What happens when measures are relaxed

“Essentially the moment those restrictions were released, those trends reversed,” Dr. Mark Siedner, an investigator in the Division of Infectious Diseases at Massachusetts General Hospital, who led the research team, said in a statement.

Experts have said that a second lockdown isn’t necessary to get the virus under control: strong safety measures like universal face masks, social distancing and hand washing could be nearly just as impactful.

Fauci warned last month that communities across the country should double down on those measures as a potentially challenging season approaches.

But those efforts remain a point of contention: Many Americans have protested the use of masks and despite repeated warnings from state leaders, in some parts of the country large gatherings have continued.

Vaccine could be deemed safe next month

It’s likely US health officials will know whether a Covid-19 vaccine is safe and effective as early as next month, Fauci said Monday.

“I think comfortably around November or December, we’ll know whether or not the vaccine is safe and effective,” he said.

There are currently 10 Covid-19 vaccine candidates in late-stage, large clinical trials around the world, according to the World Health Organization. Several of those are in the US and at least two have been in Phase 3 trials since late July.

Once a vaccine is deemed safe and effective, it’s likely companies will already have doses to begin distributing, Fauci said.

“There will be vaccines available, likely, for some people, limited amount, by the end of this calendar year, the beginning of 2021,” Fauci predicted.